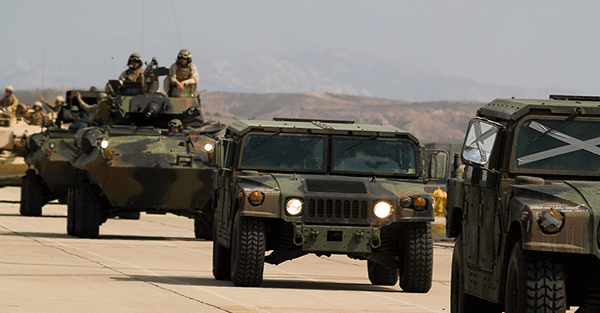 Whether directly or indirectly, the CIA and U.S. government were certainly involved in creating ISIS.

Indirectly, weapons were supplied to rebel forces in Syria, who turned out to be ISIS, among other rebel groups.

But it is more than likely that the CIA created ISIS directly, just as it funded Al-Qaeda in the 1980’s to fight the Soviets. Then there are the green screen beheadings staged on what many believe to be a western studio set. The CIA is said to have paid over half a billion dollars to have the propaganda made.

So when something pops up from the media saying what ISIS is doing, what they are really saying is what the highest levels of U.S. intelligence want you to think the boogeyman is doing.

Really, who benefits from terrorism most? The United States government of course. The more scared citizens get, the more they can control us.

Just the other day we talked about the State Department issuing a broad brushed warning for tourists visiting places in Europe, some of which are statistically safer than U.S. cities.

But the government always needs to make sure they have all their bases covered. Not only should you be afraid to leave the country, go to the mall, go to the movies, ride public transit, run a marathon, go to a club, fly on an airplane, attend a parade, or leave your house.

Now, you must be afraid of Craigslist and peer to peer barter. Terrorists are said to be encouraging a new avenue to find victims to kill.

Jihadists are also encouraged to place some stuff for sale on “buy and sell websites such as Craigslist, Gumtree, eBay, the Loot, and others” and “specify that collection and payment is only available in person and that only cash is accepted. Also, the item being advertised should be something that requires the victim to enter one’s property.”

Of course, this seems like the perfect warning to help the U.S. government kill multiple birds with one stone.

On the one hand, this casts a shadow over barter and trade elements in the economy that might be out of the taxman’s reach. It is an extra plus if the government is able to discourage these types of transactions which do not go through government filters of banks, credit cards, and government agencies. Don’t trust your peers, trust only government sponsored platforms of trade.

On the other terrible sickening hand, this actually does give homegrown lone wolf terrorist ideas of how to cause death and destruction in new ways. Every time the people are properly terrorized, the government gains more control.

Also indicated in the “ISIS” publication is how to easily get weapons to carry out atrocities inside the United States.

In the United States, “anything from a single-shot shotgun all the way up to a semi-automatic AR-15 rifle can be purchased at showrooms or through online sales – by way of private dealers – with no background checks, and without requiring either an ID or a gun license,” ISIS states. “And with approximately 5,000 gun shows taking place annually within the United States, the acquisition of firearms becomes a very easy matter.”

They include a picture of an unidentified gun show with the caption, “Gun conventions represent an easier means of arming oneself for an attack.”

Of course, that is not true, but it wouldn’t stop the control freaks in government from calling for more strictly regulated firearms. Clearly, ISIS is using the loophole to arm their extremist agents of terror!

When the largest beneficiaries of terrorism are the United States government, it should raise quite a few red flags about the actual source of terrorism. Even if the CIA hadn’t created ISIS, why would they let a good crisis go to waste by destroying the organization?

Keeping ISIS alive and well is the most expedient way for the U.S. government to reach all their domestic goals.