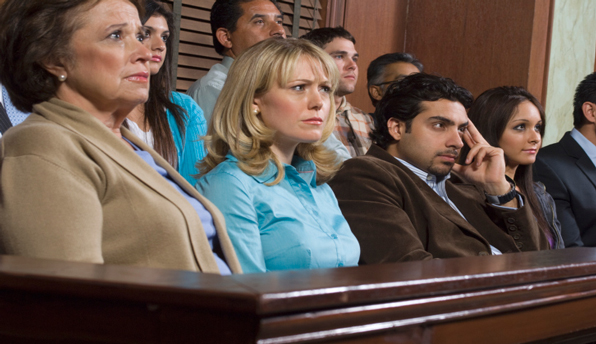 There’s not a single person that has to go to prison in the USA for growing, selling, using, or possessing marijuana.

But 21 states still prohibit marijuana use, cultivation, or sale in any form, even for medical use.

Everything cannabis related is still illegal at the federal level. As a schedule 1, highly illegal drug, marijuana is considered just as dangerous and addictive as heroin.

So it is reasonable to think that about 7 or 8 people on any randomly selected 12 person jury disagree with laws criminalizing marijuana.

And those people have the power to deliver a not guilty verdict, based on their belief that marijuana laws are unjust.

This is one example of how jury nullification can be used to erase or nullify, bad laws.

The Power of Juries

In the United States, all accused criminals have the right to be tried by a jury of their peers.

Adults from the area where an alleged crime was committed are chosen to hear the court case. They have to weigh the evidence. And if they have any reasonable doubt that the accused committed the crime, they are supposed to deliver a not guilty verdict.

But not everyone knows that juries can also deliver a not guilty verdict when they disagree with the law.

So say all the evidence clearly shows that, for example, a veteran was growing marijuana to treat Post Traumatic Stress Disorder.

As a juror, you do NOT have to deliver a guilty verdict, even if you are 100% sure he committed the “crime.” Instead, you can disagree that it should be criminal at all, and say not guilty.

Unfortunately, defense attorneys are often not allowed to argue in court for jury nullification. The judge can force them to only argue the facts of the case. They usually cannot suggest that the jury find the defendant not guilty because the law is unjust.

Some states, like New Hampshire and Oregon, have tried to pass laws requiring courts to inform juries of their right to nullify.

New Hampshire’s bill would require courts to inform juries that even if the facts point clearly to guilt, “you may still find that based upon the facts of this case a guilty verdict will yield an unjust result, and you may find the defendant not guilty.”

Of course, prosecutors will do everything possible to give the impression that the jury must decide the case based on the facts, and a strict reading of the law.

Sometimes, they will even lie.

The owner of a California marijuana dispensary was prosecuted under federal law, even though his business was legal at the state level.

Prosecutors told the jury that they had to decide the case strictly on the federal law. The jurors were instructed that if they believed the evidence showed that the man violated the law, they must deliver a guilty verdict.

Prosecutors even told the jurors that if they truly thought the man was guilty, they could be prosecuted for delivering a not guilty verdict.

This was a lie, plain and simple. Jurors cannot be prosecuted for delivering a not guilty verdict under any circumstances.

In the 1969 Court Case United States v. Moylan acknowledged that juries have an “undisputed power” to acquit, even if that verdict “is contrary to the law as given by the judge, and contrary to the evidence.”

Because of this “mistake” on the part of prosecutors, the man will get a new trial on federal drug charges.

But that doesn’t mean the jury will necessarily know that they have the power to nullify the bad laws he is being prosecuted under. United States v. Moylan also said that the court can refuse to allow the jury to be instructed on jury nullification.

Fighting Corruption and Trumped Up Charges

Thomas Jefferson gave another good reason to use jury nullification.

He said juries should deliver a not guilty verdict if the defendant’s case “relates to any point of public liberty, or if it be one of those in which the judges may be suspected of bias.”

In other words, if the defendant was simply exercising a basic freedom that didn’t hurt anyone, he should be found not guilty. It doesn’t matter if he broke the law, freedom is more important.

And then he adds, if you suspect a biased judge, you should also rule not guilty.

If the judge, prosecution, and arresting officers are a little too chummy… might want to give jury nullification some extra thought.

Is the accused being convicted just on the testimony of the cops, an expert witness, or a lab em ployee?

Might be grounds for nullification if there is no other evidence.

There was a case where one corrupt lab employee from Massachusetts sent thousands of people to prison with false testimony.

And just the other day we discussed a case where a DNA testing machine’s faulty algorithm sent a man to prison.

And unfortunately, police have been known to plant drugs on suspects and frame them for a crime.

People are sometimes put behind bars based solely on the testimony of police.

And consider the history of racism in the justice system dating back to when slavery was legal in the south.

Even then, northern juries used jury nullification for laws relating to slavery. For instance, the Fugitive Slave Act compelled northerners to help return runaway slaves to the south. Juries could use nullification to declare northerners who violated this act not guilty.

There are countless instances in today’s courts where jury nullification would be appropriate. It just depends on the specific facts and circumstances of each case.

It would be great to get bad laws repealed. But until then, juries have the power to:

1. Prevent the prosecution of victimless crimes:

Victimless crimes are violations of the law that don’t actually hurt anyone. If you can’t point to a victim, it means no one was actually hurt by the criminal actions.

That is why possession of drugs is a victimless crime–having drugs in your pocket doesn’t actually victimize anyone. The same goes for laws criminalizing sex acts between consenting adults, code violations, or failing to get a business license.

2. Prevent corruption in the justice system:

It is better to let guilty people walk free than to send an innocent person to prison.

If the evidence rests solely on inherently fallible witnesses, or if there is any reason to believe the witnesses, prosecution, or court is corrupt, you should consider jury nullification.

Every juror walking into a courtroom should know that they have the power to deliver a not guilty verdict if they disagree with the law that was violated, or suspect corruption from the police, prosecutors, or judges.

That’s why we need to spread the word far and wide.

Tell everyone you know, especially when they get called for jury duty.

And please share this article to spread the word!