It is taken as a fact that Medicaid helps in the fight against opioid addiction.

A recent Senate committee report pointed out that prominent publications like the New York Times say:

Public appreciation for the program [Medicaid] has steadily increased as people come to understand its importance in the health care system, including its central role in combating the opioid epidemic.

This “fact” took a central role in defending Medicaid funding in Obamacare during last year’s attempts to repeal the law.

The only problem is that this fact isn’t true.

The Senate report is entitled: Drugs for Dollars: How Medicaid Helps Fuel the Opioid Epidemic. The Majority Staff of the Committee on Homeland Security and Governmental Affairs released the report on January 17 of this year.

The information adds to the evidence of corruption in the distribution of opioid painkillers as well as opioids prescribed to combat addiction.

Far from helping in recovery, government funds are used by criminals to profit from and exacerbate the epidemic.

We have discussed the role that the drug war had on increasing heroin addiction and deaths. And we have touched on the FDA’s relationship with drugs companies which fuels opioid sales and suppresses alternative recoveries.

But the Senate report shows that government funds are also used directly to fuel the crisis.

Medicaid provides an incentive for doctors to overprescribe, and for patients to overuse prescription opioids. This is based on the pay structure, and nature of “free” pills.

But people on Medicaid are financially strapped. So even if their original intentions for getting pain pills were pure, the cheap drugs present an opportunity that is hard to ignore.

For dangerous opioids such as oxycodone, Medicaid co-pays can run as low as $1 for as many as 240 pills—pills that can be sold for up to $4,000 on the street

Directly, doctors and patients commit fraud to obtain pills that can then be resold.

This report highlights nearly 300 criminal cases involving at least 1,072 defendants in which people have been convicted or charged of abusing Medicaid to obtain or sell opioids…

In one Connecticut case, a ringleader recruited Medicaid beneficiaries to obtain nearly $200,000 of oxycodone from pharmacies through forged prescriptions….  Pharmacists “were very trusting just because it was Medicaid,” said the lieutenant, who added: “Absolutely, Medicaid is what allowed him to make so much money.”

…a Louisiana doctor convicted of overprescribing painkillers in a scheme to bilk Medicaid was caught on tape threatening to kill the federal agents investigating him. “They won’t even be able to have an open casket funeral,” court documents quote him as saying.

While correlation is not causation, the report does note that drug overdose deaths are rising at a faster pace since Medicaid expansion during the Obama years. And more money is spent through Medicaid on opioid-related hospital stays than through private insurers. The difference became even more pronounced after Medicaid expansion. 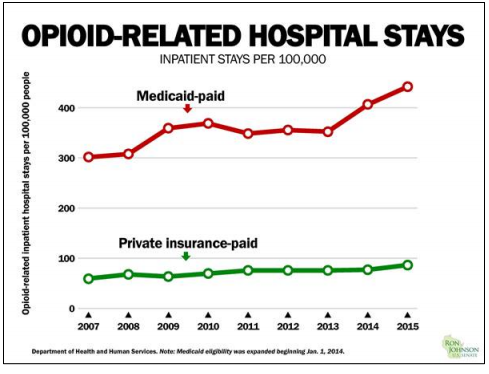 States with the largest expansion of Medicaid also saw the highest increase in opioid overdose deaths.

In 2015, according to CDC figures, the five states with the highest rate of overdose deaths were all expansion states: West Virginia; New Hampshire; Kentucky; Ohio and Rhode Island. As the CDC points out: “Opioids—prescription and illicit—are the main driver of drug overdose deaths.”

In Kentucky, for instance, “the expansion of Medicaid through the Affordable Care Act increased the percentage of Clay County residents with Medicaid and gave more of them access to free prescription drugs, including pain pills.” With about 60 percent of county residents now on Medicaid—up from 35 percent in just three years—use of oxycodone has risen while the waiting list for the local inpatient drug treatment facility has grown more than 50 percent.

And the opioid industry is not done making money once people go into treatment. Opioids are also prescribed to treat opioid addiction!

Suboxone and methadone are opioids which supposedly ween people off of their other opioid addictions. But as we pointed out in a previous article, methadone accounts for thousands of opioid deaths per year. And suboxone has a sketchy history in the U.S. with the government helping to fund FDA approval. The suboxone drug Buprenorphine was developed and distributed by people in and out of the revolving door of politics and pharmaceuticals.

But the money making only trickles down from there. Individual doctors also routinely defraud Medicaid to get in on the action. They run pill distribution operations catering to Medicaid users.

David Russo, a Maryland pharmacist, admitted in federal court that he improperly billed
Medicaid for hundreds of thousands of illicit prescriptions for opioids, defrauding the program out of at least $90,000…

In a relatively short time, Russo became one of “the largest dispensers of [oxycodone and methadone] in the entire State of Maryland” before law enforcement caught on to his scheme.

In court documents, prosecutors accuse Esformes of participating in kickbacks with
corrupt medical professionals that included “high-end escorts” being flown to Orlando
and “chauffeured in limousines for liaisons with Esformes at the Ritz-Carlton Hotel.”

The scheme allegedly fueled an extravagant lifestyle for Esformes, who drove a $1.6
million Ferrari.

The report cites 100 case studies which allege Medicaid fraud with tax dollars funding opioid abuse. The schemes pumped opioids into communities and got doctors and pill pushers rich in the process.

And from there, the profits trickle down to the heroin industry, where addicts turn when prescription opioids become too expensive.

Does one-third of America really have conditions that warrant prescription opioids?

The report claims 97.5 million Americans over the age of twelve use prescription pain relief.

As usual, all the signs point to monied interests in the pharmaceutical industry inflating their profits through government programs. If they can expand Medicaid, they can expand the distribution of their product. Their product just so happens to destroy families and leave mountains of death in its wake.

Do you think that was the plan all along, to fund pharmaceutical companies by expanding Medicaid? Or do you think this is an example of unintended consequences from well meaning politicians?