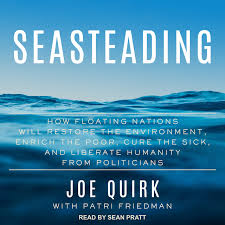 When I first read the title of Joe Quirk’s book, I laughed.

The full title is, Seasteading: How Floating Cities Will Restore The Environment, Enrich the Poor, Cure the Sick, and Liberate Humanity from Politicians.

Don’t get me wrong, I like the idea of seasteading: creating floating city-states free to experiment in governance. But I figured Quirk must have been overselling the prospects a bit with that title. Joe Quirk is a guy who likes to joke around, so I assumed the title was a lighthearted exaggeration. A hyperbolic hook.

By the time I finished the book I was utterly convinced that seasteading will save the world.

The biggest takeaway is how remarkably unimaginative world leaders currently are. Quirk’s book presents countless technologies and businesses which are solving the world’s biggest problems.

Many of these are still in research and experimentation phase. Certainly, not all of them will emerge as viable models.

But I was surprised by how little I had heard about these emerging technologies and promising innovations.

From sustainable ocean farming to providing healthcare to the poorest people on Earth, why aren’t politicians pursuing these things? Why isn’t the media reporting on the fact that private enterprises are cleaning the oceans as a byproduct of their business model, or that city-states like Hong Kong and Singapore are able to subsidize housing without charging high taxes?

The powers that be are not interested in real solutions. They are interested in fake solutions that give them real power. In fact, perhaps if a solution seems too promising, it will be marginalized by those politicians and their media tools.

Why would world leaders want to promote a good thing that they are not a part of?

And what happens when private enterprise solves all the problems government has failed to make a dent in?

The book covers all angles, as the title suggests. This is not about libertarian philosophy, although the benefits of competing governments is certainly a theme. This is about real solutions to pressing problems.

There is so much useful information in this book, that I was wondering the whole time why I had never heard much of it before. Why didn’t I know ocean fish farming can be profitable and actually improve the environment? Why hadn’t I heard about advancements in wave power and ocean current electricity? How has an organization delivering affordable care to the poorest people via floating hospitals not been widely touted?

That is the path you are taken down in Seasteading. Quirk leads you slowly through the stories of why people are trying to seastead. And it is definitely not just libertarians!

Environmentalists and ocean conservationists see seasteading as the best, and possibly only way, to stop the deterioration of the ocean and reverse its death. They understand that seasteading will help remove carbon pollution and provide non-polluting farms with staples of sustainable fish, seaweed, and algae.

You may think these environmentalists are wrong about carbon footprints, and the environmental impact humans have made. And that is what’s great about these solutions: they are private businesses. No one is trying to raise your taxes to pay for carbon credits or make the price of fuel skyrocket. These people are not trying to restrict you in any way, like the politicians’ anti-human stance on climate change. The seasteaders are in fact providing benefits like lower cost fuel and cheaper healthier food.

The defenders of the poor and oppressed see that seasteading can provide opportunities for the poverty-stricken, and safe havens for refugees. Ocean-going medical tourism is the quickest way to solve severe problems in the American healthcare system. The seas are bubbling with energy that could be harnessed for electricity.

One business provides medical care for Westerners at a fraction of the price in their homelands. But the real passion behind the business was giving medical care to the poorest people in India. Rather than run a charity that depends on donations, they created a for-profit business. That’s how you make “charity” sustainable. Rich folks from the west benefit by saving money on important procedures. Poor Indians benefit by having their insurance and procedures subsidized by the rich Westerners.

And yes, seasteading will absolutely improve government, because you can easily exit a bad situation. Quirk provides interesting details about Singapore’s quick prosperity after being expelled from Malaysia. He explores why Hong Kong has been able to remain independent despite the giant at its door. He looks at tiny nations that have historically benefitted from being islands. Would they benefit even more if they could move?

The information in this book is huge. We are on the horizon of seeing governments behave like businesses, which means peace is more profitable than war. War will become a burden for governments and contractors alike, not a way to monopolize resources and funnel wealth from the poor. Energy will become a clean commodity as abundant as salt water. Saltwater, by the way, will become fresh water–well some of it, for drinking and such.

Quirk brings his book to an informative crescendo, where you can almost hear the symbols clashing with every fact he drops. Antiquated oppressive structures of society crumble under the truth, as Atlantis rises from the depths of the ocean.

You obviously should take what I am saying with a grain of salt. I was already super excited about seasteading. I am basically THE target audience for this book. But it won’t just appeal to the likes of me. It has history, science, philosophy, politics, and even a touch of literature.

And of course, you have to take what Joe Quirk says with a grain of salt as well. He works for the Seasteading Institute, and this book is an avenue of promotion. He backs up the facts, but of course, he is going to present the best case scenario for Seasteading.

Still, I can’t recommend this book enough. And no, I was absolutely not incentivized in any way to provide this glowing review. I’m not looking for a job with the Seasteading Institute, and I even paid for the book myself.

(I listened to it on Audible, while building a new pen for my goats. Try Audible and Get Two Free Audiobooks)

So if you want to hear stories about the people not just theorizing and talking about seasteading, but actually doing it, get this book.

It may just convince you that the politicians and media are simply noisemakers, distracting from the immense possibilities of solving the problems they claim are impossible. Don’t believe the hype about overpopulation, environmental destruction, or growing poverty and disease.

Seasteading basically slaps all the doomsday politicians in the face. Here are the solutions. And they empower humanity, not enslave it.