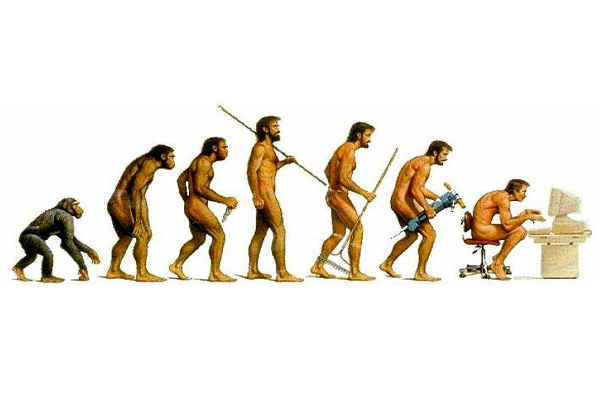 The downfall of freedom and happiness: dependence on institutions out of your control.

Governments start the wars, carry out the genocides, steal from the people. Governments lay the foundation of an unjust society, by creating a hierarchy from the beginning. Some make the laws, and some must live by them.

But the government is only half of the picture.

I always trusted in the power of the free market.

The free market is the true democracy which responds to the people. It is controlled by demand and quelled by consumer pressures. Economic self-interest ensures a proper check on the wealthy from becoming too evil.

But there is no free market on a macro level. There is only the collusion of the government and industry.

They have positioned themselves as the mother and the father of society. How? By destroying the institutions which once stood in their place.

The Marriage of Government and Industry

In his book Sapiens, Yuval Noah Harari describes a human transition. Populations went from farming societies inherently based on the sun and seasons, to industrial societies of assembly lines and time tables.

This caused many upheavals. Warm organic institutions–like family and community–were replaced by cold calculated ones–like factories and welfare. “Most of the traditional functions of families and communities were handed over to states and markets.”

Of course, this meant dependence on government and industry for survival. The roles of family and community had been outsourced. Now the government would take care of you, and industry would sell you fulfillment. All the structures humans evolved with quickly melted away, or became diluted.

Prior to the Industrial Revolution, the daily life of most humans ran its course within three ancient frames: the nuclear family, the extended family and the local intimate community. Most people worked in the family business – the family farm or the family workshop, for example – or they worked in their neighbours’ family businesses. The family was also the welfare system, the health system, the education system, the construction industry, the trade union, the pension fund, the insurance company, the radio, the television, the newspapers, the bank and even the police.

The community offered help on the basis of local traditions and an economy of favours, which often differed greatly from the supply and demand laws of the free market. In an old-fashioned medieval community, when my neighbour was in need, I helped build his hut and guard his sheep, without expecting any payment in return. When I was in need, my neighbour returned the favour. At the same time, the local potentate might have drafted all of us villagers to construct his castle without paying us a penny. In exchange, we counted on him to defend us against brigands and barbarians. Village life involved many transactions but few payments. There were some markets, of course, but their roles were limited. You could buy rare spices, cloth and tools, and hire the services of lawyers and doctors. Yet less than 10 per cent of commonly used products and services were bought in the market. Most human needs were taken care of by the family and the community.

On a small scale level like that, people were held accountable when they leached off the system. Families and communities were also the enforcement structure of this social insurance. Gossip was an important function of accountability. You can bet people talked if someone balked at their duties. The next time they needed something, they might find themselves in a bind.

But in addition to the obvious replacements like police, welfare, and corporate jobs, there was the matter of replacing the emotional aspects family provided. Governments and industry teamed up to give us a solution.

Consumerism and nationalism work extra hours to make us imagine that millions of strangers belong to the same community as ourselves, that we all have a common past, common interests and a common future. This isn’t a lie. It’s imagination. Like money, limited liability companies and human rights, nations and consumer tribes are inter-subjective realities. They exist only in our collective imagination, yet their power is immense. As long as millions of Germans believe in the existence of a German nation, get excited at the sight of German national symbols, retell German national myths, and are willing to sacrifice money, time and limbs for the German nation, Germany will remain one of the strongest powers in the world.

But we can keep what we like about government and markets, and do away with what we don’t. We can form new “tribes” that give us actual mutual aid which communities once gave. We can move to or create villages that match our needs and desires.

That way, we interact with warm institutions. Structures we are a part of and can influence. They are made up of people we know, and have real relationships with.

The government gives us imagined communities in order to control us. Nationalism makes sure we are ready to fight the next war, providing bodies and wealth to fuel political ambitions.

The market gives us imagined communities as a way to sell to us. Apple users are part of an exclusive club that signal they are wealthy and hip. Doesn’t that make you feel fulfilled?

But what about a community of people who are all passionate about farming, making their own products, and trading goods and labor? We can keep our smart phones and internet access, just like 10% of the village economies of the past relied on outside merchants. But when it comes to our water, electricity, food, hygiene products, and even entertainment, it is already quite easy to provide all that on a community level.

Now that the world has been so voluntarily centralized by the internet, we can decentralize in ways that benefit us. We can create little communities without becoming hermits. We will be free to come or go as we please, no forced labor, false choices, or communist utopia. Just voluntary groups who offer warm alternatives to dictatorial and industrial institutions.

I don’t want my barber to remove my appendix when I get appendicitis. But I wouldn’t at all mind my neighbor providing my children’s education, with the help of the countless resources on the internet.

We are now in a position to meld the best of both worlds. We can reach back and choose what was great about pre-modern community governing structures. And we can hold onto the technology and civilization that we like in today’s world.

Society is like a pendulum which swings from one extreme to another. But each sway loses some energy and brings us closer to equilibrium.

The advance of industry gave mankind countless benefits. But at some point, it went too far. We need to learn how to reintegrate warm institutions into our lives, without doing away with the benefits that large scale industry has provided.

In a sense, humanity was once so dependent on small scale warm institutions that we stagnated, and could not advance. People suffocated as the pendulum stopped and reversed.

Once we finally did break free, we lost all touch with warm institutions. Cold institutions replaced the family, and now many feel alienated and depressed.

Can we find an equilibrium? Can we meld markets and governance into family and community life in a way that both frees us from the tyranny of government and corporations, but allows us to remain free individuals?

The Pendulum is Ready to Swing Back

Radical experimentation in governance is required to heal society and correct the trajectory. Stagnation is the best we can hope for with the current model of government and corporate collusion.

We need to restore the community structures of the past. We cannot simply do away with institutions people rely on and expect no turmoil. Rather, a model of a better society needs to be created.

This is why the next movement that will drastically improve civilization will be a period of decentralization of institutions, marked by voluntary association.