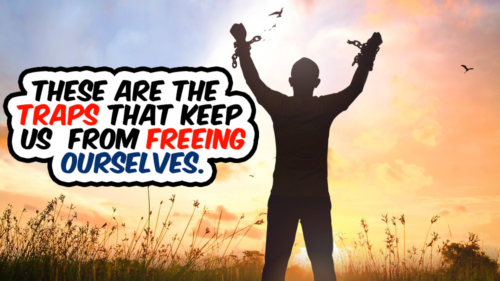 STAFF NEWS & ANALYSIS, Videos
How the Elite Trap You in Their Unfree World
By Joe Jarvis - November 06, 2020

The government is a big trap designed to keep people in its orbit.

You are supposed to work within the context the government provides to live your life, make money, and affect social change.

Or you’re at least supposed to be too afraid of the government to step out of line.

But even rebelling against the government directly is part of the trap. It means you have accepted the importance of the government– that it is capable of controlling you.

Harry Browne identified different “traps” like these that we fall into in his 1973 book, How I Found Freedom in an Unfree World.

His main point was that we each have the power to be remarkably free, but we get tricked into believing our freedom is outside of our own control.

For example, trying to find freedom by working in a group is a trap.

A group as a single united entity does not exist. Only individuals making up the group can act. The will of the group is an illusion. And every accomplishment of a group can be traced back to individual achievement within the group.

When it comes to freedom, effort is wasted on influencing and steering a group that has little chance of achieving the desired outcome. You can accomplish more on your own.

That doesn’t mean groups are never beneficial. Working together is absolutely necessary to live in a modern world. But only by understanding where individual interests overlap, and clearly defining the roles of how various parties can strengthen as a group, is it actually beneficial.

Specialization of labor solves this problem in the free market. But a crucial aspect of making groups work is having the ability to leave the group when it no longer serves your interests.

The government is a type of Group Trap, made worse by the fact that we can’t simply say no thank you for their services, and go your separate ways.

But that doesn’t mean you have to fall into the traps.

Governments have done a tremendous job over the millenia convincing people that no other method of organizing could produce safe and prosperous societies– because governments have such good track records, right?

Assuming that the government can solve a problem which the free market (individuals making their own decisions) could not is falling into the Group Trap. What magical ability does a group of voters, politicians, or bureaucrats have?

“The Government Traps ensnare many people because they never stop to recognize what a government is. It’s an agency of coercion that’s accepted as necessary by most people within its area of influence. It differs from the Mafia only in that the Mafia isn’t usually considered necessary by the people in the communities it “serves.”

Browne’s solution involves recognizing that the government is not all powerful and all knowing– as Hollywood would have you believe.

And the government does have limited resources, despite what the Federal Reserve’s money printer would have you believe.

But they will certainly make examples of people who defy the government openly.

So when it comes to the government, Browne says:

The government is not all powerful and omniscient. You generally don’t need to go out of your way to follow all the laws and regulations. Check first, but generally whatever law you want to break has a very minor punishment.

For example, if you ignore permits and build a shed anyway, first you are hopefully in a place where that won’t be detected, or you won’t be turned into the Gestapo by nosy neighbors.

Your chance of being caught is low, and even if you were caught, you’d basically just have to pay the original license fee, and maybe a penalty.

But the government does make examples of people, which is why you don’t want to confront it.

Rather than emboldening a movement that rallies to your cause, confronting the government makes sure you are noticed, and gives them a target to pursue. Punishing you helps them keep others in line.

And the same principle applies when you organize to confront the government.

Now I’m not entirely sure I completely agree with Browne on his point about not organizing.

For example one thing I would love to accomplish one day is to create a community of people who value the same type of freedoms I value.

When you’re in the business of talking about how to get around the government, as Browne was and I am, we essentially have to follow all the rules.

By constantly criticizing the government, I put a target on my back, which is why I do everything totally legit. All my tax incentives are perfectly legal and IRS compliant.

I’ve made the calculus that to be in my line of work it is worth the cost of being under more scrutiny.

But for most people, flying below the radar is your best bet to achieve whatever freedoms you desire.

Which, by the way, you should be specific about. A general feeling that the government oppresses you is hard to overcome. You have to identify the specific laws, regulations, or obligations that are most stifling to you, and go about solving each one, step by step.

Harry Browne passed away in 2006, and as I said earlier, the book was originally written in the 1970s. But I recommend How I Found Freedom in an Unfree World to anyone interesting in freeing themselves– and not just from government, that is just one small section of the book.

Browne also talks about traps we fall into when it comes to social obligations, believing certain things should make us happy, or that it is a waste to abandon previous investments.

Other interesting “traps” Browne identifies include:

Despair Trap: The belief that you are powerless to resist, that others can control your freedom and happiness, and that there is nothing you can do about it.

Instead, you can create your own utopia– individual action that doesn’t depend on others.

Burning Issue Trap: See my recent video, No, you don’t have to care about any of this. People try to force you to to care about what they care about. There are too many problems to solve them all anyway, so focus on what matters to you.

Certainty Trap: This is basic the failure to ever examine the premises you are working off of, or to blindly trust experts simply because they are experts. But in reality, nothing is certain. That truth should not be paralyzing, but it should be used to inform your course of action.

Browne helped me realize that a lot of the slavery I felt was in my own head. Yes, it was a reaction to real outside forces that I could not control. But what strangled my freedom was giving them free real estate inside my head.

Freeing myself mentally from the government, elite, and society’s rules was the first step I needed to take in order to free myself in more tangible ways that improve the daily quality of my life.

If you want to grab his book How I Found Freedom in an Unfree World, follow this link.