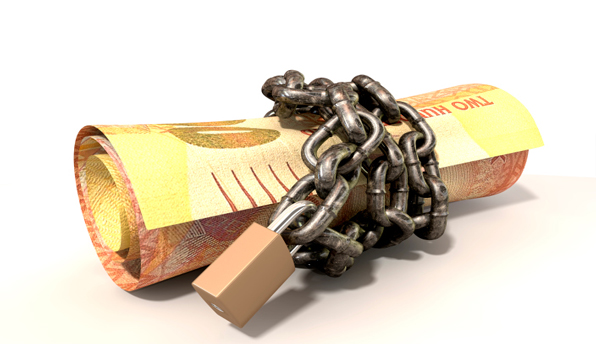 HSBC imposes restrictions on large cash withdrawals … Some HSBC customers have been prevented from withdrawing large amounts of cash because they could not provide evidence of why they wanted it, the BBC has learnt. Listeners have told Radio 4's Money Box they were stopped from withdrawing amounts ranging from £5,000 to £10,000. HSBC admitted it has not informed customers of the change in policy, which was implemented in November. The bank says it has now changed its guidance to staff. New rules … – BBC

Dominant Social Theme: They will protect our financial system at any cost. Thank goodness!

Free-Market Analysis: The government wants you to know that if you try to take out too much cash, there will be trouble.

The larger issue is what may be a deliberate removal of funds from emerging markets. Why? Because that money has to go somewhere. And we figure those who are behind this vast upwards swing of the market intend to continue it for a while longer if they can.

These are MESSAGES and the Internet is good at delivering them.

By this point, many literate, Internet savvy people have a dialogue going on their heads that connects directly to Internet news and information. Today, as never before, the globalist banking clique can broadcast their messages and delicate adjustments via the Internet as they choose.

The HSBC monetary freeze was no accident, from this perspective. It was a MESSAGE. And it would have been far harder to generate this sort of dialogue within the print media. But the Internet provides us with almost instantaneous communication. The message can be delivered in ways that are not immediately connectible to those providing them.

We first noticed this phenomenon with the attacks on Muammar Gaddafi that led to his death. His death and the savagery accompanying it were broadcast around the world. The Anglosphere media is ordinarily shy about broadcasting a single curse word but, as we observed, suddenly vicious videos of Gaddafi's death were everywhere.

And then there was Hillary's famous quote, played over and over again: "We came, we saw, he died."

Was this an accident? Or perhaps this was a message being sent to others in the region – to leaders around the world: The hinge of global governance was being tightened; best not stand in the way.

And what of this recent HSBC development? Another message sent? Here's more from the BBC article:

Stephen Cotton went to his local HSBC branch this month to withdraw £7,000 from his instant access savings account to pay back a loan from his mother. A year before, he had withdrawn a larger sum in cash from HSBC without a problem. But this time it was different, as he told Money Box:

"When we presented them with the withdrawal slip, they declined to give us the money because we could not provide them with a satisfactory explanation for what the money was for. They wanted a letter from the person involved."

… Mr Cotton cannot understand HSBC's attitude: "I've been banking in that bank for 28 years. They all know me in there. You shouldn't have to explain to your bank why you want that money. It's not theirs, it's yours." Peter from Wiltshire, who wanted his surname withheld, had a similar experience.

… Belinda Bell is another customer who was initially denied her cash, in her case to pay her builder. She told Money Box she had to provide the builder's quote. HSBC has said that following customer feedback, it was changing its policy:

"We ask our customers about the purpose of large cash withdrawals when they are unusual and out of keeping with the normal running of their account. Since last November, in some instances we may have also asked these customers to show us evidence of what the cash is required for."

… Eric Leenders, head of retail at the British Bankers Association, said banks were sensible to ask questions of their customers: "I can understand it's frustrating for customers. But if you are making the occasional large cash withdrawal, the bank wants to make sure it's the right way to make the payment."

Message sent. Now people – who are not idiots – are on notice of several things. First came the JP Morgan news that people might not be able to wire large sums of money or even withdraw them. And now comes this HSBC news, which is similar, though even more invasive.

In both cases, the banks in question promptly seemed to reverse their policies when directly confronted. JP Morgan claimed that it was only letting people know that they would have to upgrade to ANOTHER account to gain the privilege of making larger wire transfers.

And HSBC claimed soon after the original BBC report that it had clarified its policies to ensure that people would not have to provide detailed information about withdrawals.

But a reading of the JP Morgan letter that started the fuss reveals that the initial letter never explained that recipients ought to upgrade to another account. If this were a sales letter, surely JP Morgan would have used the letter as a way of urging people to take advantage of more expensive opportunities.

The HSBC "climbdown" included specific language that people would not have to justify large withdrawals, but as we can see from the excerpts of the BBC article, the bank – and banks generally – reserve the right to ask questions.

They all said they reserved the right to ask questions about large cash withdrawals.

The intent here seems obvious to us. A message is being sent. "You do NOT have total control over your money. Watch what you do with it."

In the case of JP Morgan, it was sent through ZeroHedge. But in the case of the HSBC letter, the chosen messenger was the BBC. And the BBC, in our view, is a suspicious messenger indeed.

Put it all together and we come back to our primary premise – our recent one anyway. There are many moves being made to concentrate investor capital in Western markets.

The Wall Street Party is a determined dominant social theme.

One could argue the downdraft in precious metals, the ongoing crashing of emerging markets, the elevation of "doves" to large central banks, the changing of regulations to make stock advertising easier and even the fracking technology that provides a positive story for Western industry … all these are intended to generate a continued stock market boom.

We suggested this in a recent article, "Is China Over?" when we wrote: "Third, it may be that a staggered and staggering China redirects eyes to Western markets. Once again, the West's markets are the cynosure – literally the only game in town."

We received the following feedback from "no republicrat" yesterday:

"Heard on CNBC last night, "sell gold and emerging markets and buy U.S. stocks. Perhaps in the short term they were 2 days late with the advice."

Thanks, "no republicrat"! We see massive forces enrolled to continue the current stock boom. Even within the context of a rolling, global bust, we would not be surprised if the pressure to push up Western markets continues. We will see what this next week brings.

Such messaging – both subtle and brutal – continues to percolate in the mainstream media and on the Internet as well.