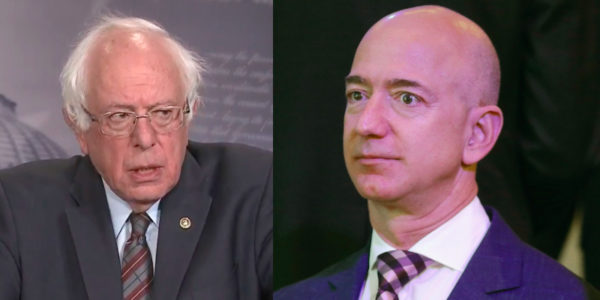 I don’t need to tell you how powerful the United States government is.

So imagine if you saw a piece of legislation with your name on it.

And I’m not talking about that kind of law named after a victim, or in your honor.

I mean opening up the news and seeing that the Stop Joe Jarvis Act was introduced in Congress?

That sounds like the largest government on earth personally threatening an innocent person.

And that is exactly what Senator Bernie Sanders did last week.

He is, of course, referring to Jeff Bezos, the owner of Amazon, and richest man in the world.

And what has Bezos done to draw the ire of the Democratic Socialist from Vermont?

He created jobs for poor people.

“The Stop Bezos Act gives large employers a choice: pay workers a living wage or pay for the public assistance programs low wage workers are forced to rely upon,” the text of the legislation reads.

Don’t you love the choices government gives you?

As usual, it is no choice at all. If this passes, it will raise the cost of hiring employees.

The Stop BEZOS Act forces large companies to cover the costs of any employees on welfare.

If an employee receives federal assistance or any kind, the company will be taxed for the full cost of that assistance. So if a worker gets a total of $6,000 a year in federal welfare like SNAP (food stamps), companies will be taxed an extra $6,000 to cover the cost. Companies will owe the tax for each employee on welfare.

So Bezos must be stopped because he employs people.

He is catching hate for employing people most in need of jobs.

One way to solve this issue is to NOT hire anyone in poverty. Welfare recipients need not apply.

So looks like robots are the next best option. Better invest heavily in automation, since you will be punished for providing jobs to poor people.

Or will employers use other clues to avoid hiring people who might be on welfare? I’m sure it wouldn’t be hard to find an algorithm that could give companies the stats on what observable characteristics in job applicants are most likely to signal poverty.

So even if Bernie had the best intentions, this law would just be yet another barrier to employment for the least skilled workers.

That is the same with a high minimum wage. It causes companies to hire fewer low skilled workers, so people never get the opportunity to train, gain skills, and work their way up to better positions, or better jobs with other companies.

Why hire someone worth $10 an hour if you have to pay $15 an hour? Just get someone whose skills create $15/hour of profit for your company, even if they won’t necessarily be using all those skills for the position.

But even if this bill did produce the desired effect, it is a fascist authoritarian overreach of power.

It says that because Amazon has created over half a million jobs, they now owe those employees more. If Amazon had created 0 jobs, no one would be whining. But because of the enormous positive impact on the economy which Amazon has had, it is being targeted and punished.

Some have sold this as a bid to end corporate welfare to Amazon.

Amazon responded to Bernie Sanders’ criticism in a blog post.

Senator Sanders continues to spread misleading statements about pay and benefits. Amazon is proud to have created over 130,000 new jobs last year alone. In the U.S., the average hourly wage for a full-time associate in our fulfillment centers, including cash, stock, and incentive bonuses, is over $15/hour before overtime…

Amazon provides employees with a comprehensive benefit package including health insurance, disability insurance, retirement savings plans, and company stock. The company also offers up to 20 weeks of paid leave and innovative benefits such as LeaveShare and RampBack, which give new parents flexibility with their growing families. With LeaveShare, employees share their Amazon paid leave with their spouse or domestic partner if their employer does not offer paid leave. RampBack gives new moms additional control over the pace at which they return to work. Just as with Amazon’s health care plan, these benefits are egalitarian – they are the same for fulfillment center and customer service employees as they are for Amazon’s most senior executives…

While Senator Sanders plays politics and makes misleading accusations, we are expending real money and effort upskilling people with our Career Choice program. Career Choice is an innovative benefit that pre-pays 95 percent of tuition, fees and textbooks (up to $12,000) for courses related to in-demand fields, regardless of whether they’re related to skills for jobs at Amazon or not. We have over 16,000 employees who have participated in Career Choice.

It really just boggles the mind. Amazon offers a job in exchange for work. If both sides agree, why should Amazon suddenly be forced to pay more?

They offer at least a market rate to workers. And then they go above and beyond what is required with extra benefits and flexibility.

Amazon cannot control the various other factors that might put someone in poverty.

Most of those factors include government manipulating the economy, just like Bernie Sanders is trying to do with this legislation.

Of course, there are things about Amazon that I don’t like. Here’s the criticism Jeff Bezos actually deserves.