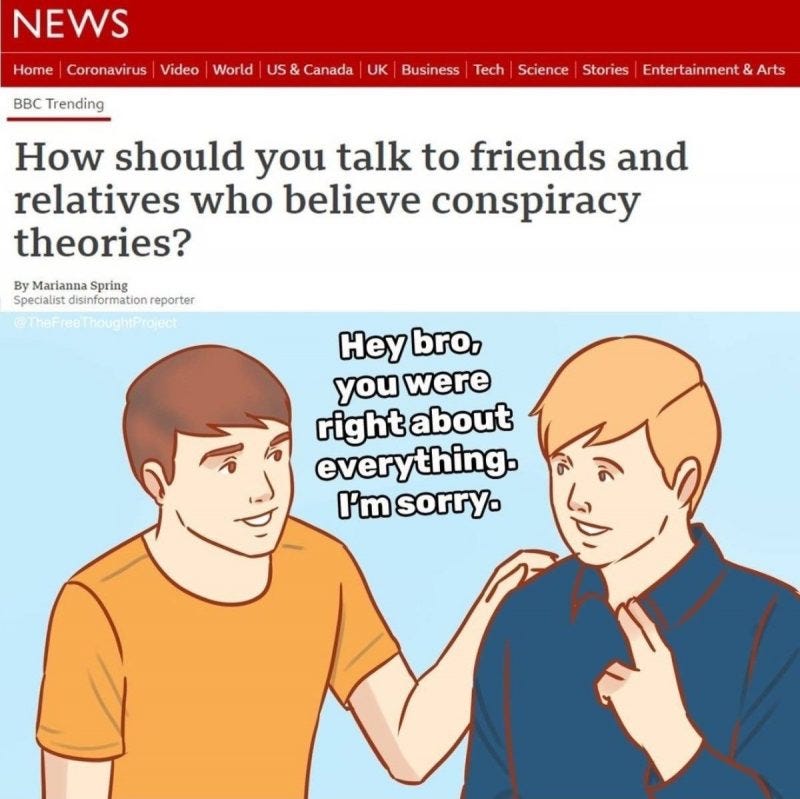 Censorship is running rampantly out of control. We are witnessing the slippery slope into the bowels of totalitarian perma-states being cemented, with a vice-like grip on freedom of speech, freedom of thought, freedom of action, and freedom of behaviour.

The latest drive to weed out and tar the conspiracy realists with the old familiar sting, the conspiracy theorist brush of doom, is being propagated by the Unesco #ThinkBeforeSharing infographic.

Their bottom lips are quivering and their anuses puckered.

Their woven webs of deceit, outright fallacies, lexical definition changes, and truth inversions are all coming home to roost.

The message has been disseminated from way up high that it is time to go for broke, to double and triple down, stamp out any and all dissent; cranking the propaganda machine that is the legacy media all the way up to 11.

Here’s my alternate take on their handy little infographic…

The knowledge that events are openly manipulated behind the scenes with malicious intent.

2. Conspiracy realities have these 6 things in common.

3. Why do they flourish?

They provide an explanation of events or situations which are confusing to understand and bring a truthful sense of what it means to be free and sovereign individuals. This need for truth is heightened during times of engineered global hoaxes, like the COVID-19 pseudo-pandemic.

Conspiracy realities often start as a forewarning based on openly stated inter-governmental policies. They are independently researched to establish who is benefitting from the event or situation, and thus identify the perpetrators. Any evidence is then corroborated with empirical data, facts, and sources, to irrefutably prove the reality.

Once validated, conspiracy realities can be fully realised and further investigated quickly. They are nigh impossible to refute, as any person who tries is seen to be complicit in protecting the narrative, or subscribing to mass formation on a faith-based belief system, devoid of facts and critical thinking.

5. Why do people spread them?

There are numerous reasons. Most come to learn and therefore realise they are true. Others purposefully want to uncover, implicate or identify culpable people for apolitical reasons; simply because it is the morally righteous thing to do.

Beware: The realisation one experiences, once conspiracy theories are validated as conspiracy realities can be extremely disorientating to the individual.

It requires a complete conceptual reframing of their world view. It will subsequently alter the types of media sources they consume, as well as the way in which they interact with friends, family, and coworkers; either superficially, or openly no longer holding their tongue on subjects they have become better informed upon.

*Alas, I had a crack at photoshopping this into my own infographic version using that Unesco garbage jpeg, but I’m not yet proficient enough with the software…bear with me…

What else is coming down the pipe?

Well, I’m glad you asked and that you’ve made it this far down the rabbit hole.

In the UK, the Online Harms Bill is a particularly concerning piece of legislation. Iain Davis has done excellent work on deciphering the true ramifications of this. Here is the opening paragraph of a most informative article:

The Online Safety Bill (OSB) has been presented to the public as an attempt to protect children from online grooming and abuse and to limit the reach of terrorist propaganda.

This, however, does not seem to be its primary focus. The real objective of the proposed Online Safety Act (OSA) appears to be narrative control.

Reclaimthenet.org has been reporting on the further deplatforming of notable dissenters James Lindsay and Mark Changizi being unpersoned from the Twitterati here & here.

Another globalist collaborator / useful idiot / WEF government infiltrator wants a dystopian truth score system for people’s social media profiles to be rolled out in the UK:

Do your own research. Use your own discernment to unpack anything and everything you suspect as propagandised misdirection.

Remember the differences between our new household name lexicon:

“Misinformation” is information that is factually inaccurate but is passed along by a purveyor who is ignorant of the inaccuracy and does not intend to deceive.

“Disinformation,” on the other hand, is information the purveyor knows is false yet deliberatively imparts with the intention of deceiving or misleading.

Mal-information is information that is based on reality, but is problematic and inconvenient for the bad actors, groups, and governmental institutions that it implicates.

*Unesco’s definition plays the victimhood card when there are inconvenient truths:

Nicholas Creed is a Bangkok-based journalistic infidel impervious to propaganda. Follow Creed Speech on Substack here. If you liked this content and wish to support the work, buy him a coffee or consider a crypto donation: