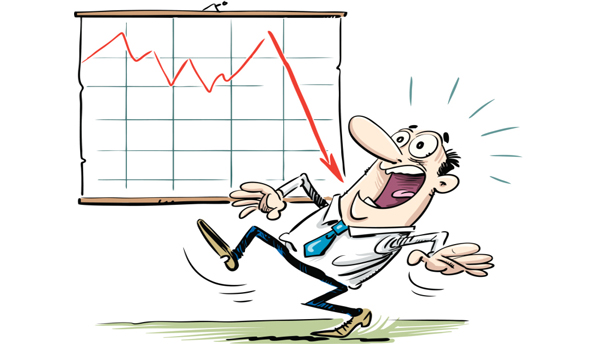 Global watchdogs rattled by lack of fear in the markets … A storm alert … from Simon Derrick at the Bank of New York Mellon. He cites three warnings from leading central bankers, all alarmed by the remarkable disregard for risk in the equity, credit, and currency markets. The Bank of England's Deputy Governor Charles Bean says the lack of volatility is "eerily reminiscent" of the run up to the financial crisis in 2007-2008. Investors are turning a blind eye to a large fact: that central banks are intent on extricating themselves from QE and emergency policies come what may, and this is going to be a painful experience. – UK Telegraph

Dominant Social Theme: Danger! The markets have gone too high …

Free-Market Analysis: In keeping with one of our newer dominant social themes, we present the above excerpt on the possibility of a near-term stock market crash and how investors seem to be ignoring it. We call this meme the "Wall Street Party."

Now ,why would there be a party during the longest postwar economic downturn? Maybe because what is obvious to us is obvious to many in the market or circling around it: Equity markets, especially, have gone from being structured casinos to carefully controlled investment facilities.

In other words, little in stock markets today – certainly US marts – happens by chance.

Between steady monetary inflation, a secretive (but still operative, surely) "plunge-protection team," vast waves of electronic trading and other measures old and new that provide equity markets with an irregular but powerful upwards bias, there is little chance of equities unwinding over a long period of time, at least not currently.

Or so it seems. Here's more from the article:

Italy central bank Governor Ignazio Visco issued a similar warning on Friday: "Volatility on the financial markets in the advanced economies has subsided to well below the historic norm, reaching levels that in the past sometimes preceded rapid changes in the orientation of investors."

In America, Dallas Fed chief Richard Fisher has been warning for several weeks that the decline in the VIX index measuring volatility is an accident waiting to happen. One almost has the impression that he is itching to inflict some "two-risk way" into markets to shatter this complacency.

Mr Derrick says dash for yield is all too like the last stage of the carry trade just before Russia and East Asia blew up in 1998, and again in the summer of 2007 when investors seemed to lose all fear. Both episodes ended with a bang, at first signalled by a surge in the Japanese yen.

Today's warnings feels very like those of the ECB's Jean-Claude Trichet at Davos in January 2007 when he told investors to brace for trouble. He said risk spreads had been compressed to dangerously low levels, though the boom was of course to run on for many more months.

… Ever rising equity prices today are incompatible with ever sliding bond yields. The two markets are each telling a different story about the state of the world … Investors are latching on to one part of the story they like, but ignoring the other part. Split personality in bonds and stocks can happen for short periods. This rarely lasts. One or the other is going to face reality before long.

Yes, of course "one is going to face reality." Let's face it now: The stock market is subject to a one-way orchestrated push. These markets may go down, but not for a lack of trying to make them go up.

We've cited the reasons many times before. The IPO channel is chock-full of faux-green solutions waiting to be validated by a rising market; private investments are eligible finally for advertising campaigns; new central banking heads Janet Yellen and Mark Carney never saw a currency they weren't eager to inflate with excess money printing.

These are just some of the modern forces competing with less recent ones to shove markets higher. Of course, because yields have fallen, journos with stories to file have started writing stories about impending crashes again.

Bonds as a signal of an impending crash are referred to in the Telegraph article above, but also in a recent Wall Street Journal article entitled, "Are Bonds Signaling a Recession, or Warning of a Market Crash?"

When Treasury yields fall, it generally means that investors around the planet are looking for a flight to safety. Or in the extreme cases, it signals that the economy is slowing — and bonds are supposed to offer better cover for investors during that time than stocks.

Some skeptical investors have pondered whether bond yields drifting mysteriously lower is increasing the chance of a recession. For starters, first-quarter GDP went into the red. The reading was down by 1%. And retail sales, a key barometer for future production, have not exactly been barn-burning numbers.

And yet somehow the S&P 500 Index hit a new all-time high of 1,924.03 on Friday. The math just doesn't add up. Should investors be preparing for a stock market crash, or even a new mild recession? The latter seems less likely, but sometimes stock selling comes entirely out of the blue. It can simply be the result of valuations getting too frothy.

… Again, this just isn't normal behavior when we are supposed to have entered a rising-rate environment months ago. Can investors just hope that this is mere allocation and foreign demand driving the interest? Maybe so, but hoping alone is often considered a very poor investment strategy.

No, it's not normal behavior. But nothing about these markets is normal – especially in the face of continued economic weakness. Our working hypothesis is that these markets are being shoved higher for a reason. In fact, the idea behind these nonsensical valuations is to convince investors to buy-buy-buy. Only when enough of them have entered again will markets ready themselves for a crash.

This scenario may play out over the next year or two, but in the meantime, we wouldn't be surprised if the Dow hits the Holy Grail of stock market averages: 20,000.

We've stuck to our predictions of higher equity marts for a number of months now not because there are any underlying factors that justify these valuations – there are not. But our conviction remains that powerful players want a higher market – a sky-high market – because a crash from that elevation may be painful enough to produce a consensus for yet more market globalization.

It can't come as any surprise that globalist elites want a global currency, global central bank, etc. But one doesn't arrive at such momentous facilities merely by talk. A good amount of pain needs to be inflicted – and what better way to inflict pain then to organize a momentous crash?

Is it going to take place?

Let's see how much farther these equity valuations rise.

And try to enjoy the ride.