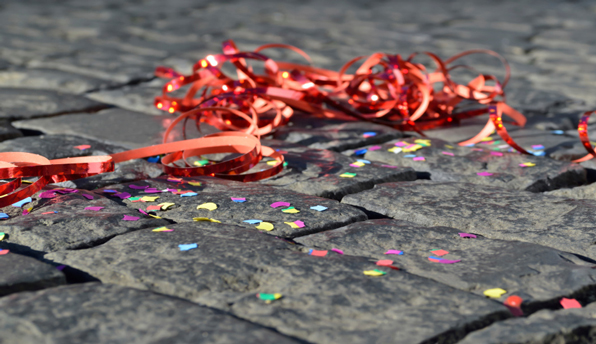 Yes, Stocks Could Drop 50% … After meandering higher for most of the year, the stock market is now sputtering. That's triggering chatter about a minor "correction," which many people believe is long overdue. And maybe that's what we're at the start of, a minor correction. Or maybe this is just a blip, and the brilliant and prudent Jeremy Grantham is right that we're on the cusp of a new bubble that will take the S&P 500 up another 10% to 15% over the next year to 2,250. (As a stockholder, I sure hope so!) Or maybe we'll get both – a minor correction and a new bubble spike. – Business Insider

Dominant Social Theme: Stocks are going down. This is the big one.

Free-Market Analysis: Bail out. The party's over! That's what we're reading in some publications now that markets have taken a tumble. We're not so sure.

Our short-term perspective has been that this faux Wall Street Party can go on at least until the fall – as we've been writing about it for a year now.

Our longer-term perspective is that it can go on for another year or even two and as a result garner headlines such as "Dow 20,000" before generating what Saddam Hussein would call "the mother of all crashes."

As of this writing, markets around the world were still selling off and probably US marts can move down farther on Friday as well, and perhaps into next week. But, you know, it's August, and we're not aware of any great sell-off taking place in August, a time when most market moguls and a lot of other lesser market participants tend to take time off, recharging for fall campaigns.

If this sell-off truly marks the end of the great "Wall Street Party," we'd expect its epitaph to be written in the markets' cruelest months – September, October and November. That's when mutual fund managers begin to "dress up" their funds by selling to declare gains. Other market participants are selling, too, and sometimes this wave of selling turns into a tsunami.

Maybe we're wrong. Maybe we'll see "blood in August" when we're used to seeing the reddest ink in October. We did mention just yesterday that the market might "correct" – but a correction is not a 2009-type sell off. It's certainly not the 50 percent that Business Insider's Henry Blodget is muttering about (see excerpt above).

Here's some more from Blodget:

… Maybe we're just in the middle years of a fantastic bull market. I don't know. (Neither does anyone else, by the way.) I'm also not predicting a crash. One thing I do know, though, is that stocks are extremely expensive on every valid historical measure I know of. In the past, this level of overvaluation has presaged poor long-term returns. So I'm not expecting my retirement account to do well from this level over the next seven to 10 years. The other thing that this level of valuation has also often preceded is something much worse than a "minor correction" — a crash.

And there are other things that are happening now that have also preceded crashes. So I would not be surprised to see stocks fall 50% from this level in the next few years. And, if that happens, you shouldn't be surprised either. A crash of that magnitude wouldn't even make stocks "cheap." It would merely take them back to their long-term average. And to deny the possibility that stocks might someday drop back to their long-term average seems the height of delusion to me.

Yes, maybe it's "different this time." Maybe, this time, stocks really have "reached a permanently high plateau." But I doubt it. And it's not just price that concerns me … Lest you be concerned that I'm just "talking my book," I should be clear about one thing: I own stocks, and I'm not selling them. (For many reasons, including that I'm a long-term investor.) From a personal-finance perspective, I would like nothing more than for the market to keep going up.

I also want to point out one new thing that is worrying me lately: the rise of investor margin debt. Money is cheap right now and the stock market has been going up for five years. As a result, lots of investors are borrowing money to buy stocks. This, in turn, is making stocks go up more, which encourages more investors to borrow more money to buy stocks. And so on …

The problem with margin debt is that the cycle is just as self-reinforcing on the downside. Once stocks drop, investors are forced to sell stocks to meet margin demands. That selling causes stocks to drop more. And so on. Basically, if and when stocks reverse course, conditions are ripe for them to fall a long, long way before anything begins to prop them up.

Blodget is correct about all this, and we've mentioned some of it as well. But our main point throughout this past year of covering the current asset insanity that passes for equity "investing" has been that every major mechanism remains directed at moving markets upwards.

Interest rates are screwed to very low levels, the Fed continues to print and has signaled that it won't necessarily tighten radically even if faced with an obvious asset bubble. Deregulation has opened up IPO and private equity channels and there are plenty of "green solutions" that the globalist crowd still wants to price in the larger marketplace.

Then there's the so-called "plunge protection team" that we assume is still fully functional and probably working overtime at the moment. Powerful central bankers such as Mark Carney and Janet Yellen are "doves" – and have actually been resistant to most tightening measures.

Of course, we're talking about timing when it comes to the current insanity. At some point, something has to give. The question, as always, is when. We've suggested market timing and hedging as strategies that can be employed when faced with sky-high equity valuations.

But we return to our basic premise: the forces that want to see stocks go up – and up some more – likely haven't reversed their priorities. The myth of the great "recovery" has to be sustained and many investors who lost money in 2009 probably haven't fully reinvested even now.

For all the above reasons, there's still a lot of upward pressure when it comes to the markets in the US and abroad, at least from elite sources. Financiers and banking controllers in China, Japan, the BRICS generally and, of course, the Anglosphere are all pulling in the same direction.

We tend to peg the resurgence of the market as beginning in late 2009 or early 2010, which means we've had about a five-year bull run. That's plenty long, but given what we see as the determination of forces arrayed against any significant downturn, we figure there may be at least another year left in the ol' nag.

Of course, as we've cautioned, not only are current equity valuations entirely out of sync with reality, this rally has come in the midst of what we call the "Golden Bull." That is, the larger cycle is commodity oriented and at some point that cycle will reassert itself, just as it did in the 1970s.

Let's see what happens today, this week and then later on … in the fall. Even a sharp sell-off might not derail things. Calling the end of any market is difficult, especially one that is as massaged and promoted as this.

One thing we're fairly sure of: There are plenty of players that will fight hard for a continuance of this massive asset bubble. Indeed, it's all going to come tumbling down – but perhaps better next year than this.