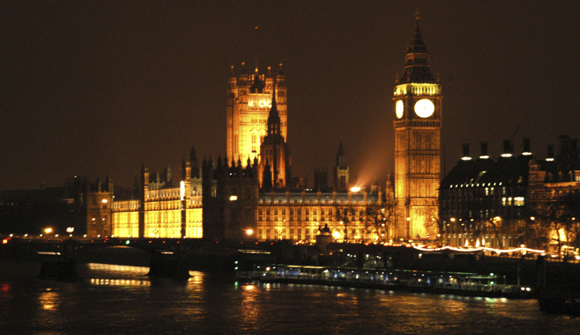 STAFF NEWS & ANALYSIS
Is UKIP the Most Significant Political Movement in the UK?
By Staff News & Analysis - November 25, 2014

It just keeps rollin' … The populist party wins the Rochester and Strood by-election … THE UK Independence Party (UKIP) bandwagon kept on rolling through the pretty Kent streets of Rochester and Strood on November 20th. Its candidate, Mark Reckless (pictured, right), won the by-election he had occasioned by defecting from the Conservatives with 42% of the vote. This gives UKIP its second by-election victory in less than two months, following the "Krakatoa-like" victory by Douglas Carswell in Clacton-on-Sea. Unlike that triumph, in a constituency stacked with the disgruntled and aged white people who are its likeliest supporters, Rochester was only 271st on its list … The victory breaks new ground for the populists, who ran by far their most organised and professional campaign to date in Rochester. – The Economist

Free-Market Analysis: Is UKIP now going to be portrayed as a populist party? The Economist uses the word "populist" (see above) to describe UKIP, and this may provide us with a significant clue.

That would be disappointing because UKIP is in many ways a "libertarian" party that wants to see a reduction in regulation and taxes and a severing of Britain's linkages with the European Union, or at least the euro.

It's also an important issue because UKIP is setting Britain on fire. This much-scoffed-at party may soon be the biggest party in Britain. That's an incredible journey and one that shows that the 21st century may be nothing like the 20th – for politicians, for voters, for bankers, for almost anyone participating in today's society.

But when it comes to politics, pressures are considerable. There are always those who scheme to undermine free-market principles. Populism is one such tool.

Populism is a kind of bastardized version of libertarianism, as is "conservatism," another political philosophy that has arisen in modernity to counteract a formal, political expansion of freedom.

Conservatism adopts economics perspectives of libertarianism in that it rejects the state's role regarding economics. But conservatism, especially the US brand, is often fiercely militaristic and is in favor of what may be called the intel-industrial state. In this way it represents, nonetheless, a statist worldview.

Populism as practiced in the early 20th century elevated the "individual man" but wanted to use the power of the state to ensure that his status remained high. We would argue that these two brands of political theology were in part cultivated by elites to provide a substitute for something more profound and freedom-oriented.

The US in particular has a history of "populism" that political elites have used to help relieve anti-statist pressure. This was especially true in the 1930s, when people throughout the West were significantly disgruntled with the current system.

If one were to define populism of the 1930s, one name probably encapsulates it: Huey Pierce Long Jr. Here's something about him from Wikipedia:

Huey Pierce Long, Jr. (August 30, 1893 – September 10, 1935), nicknamed The Kingfish, was an American politician who served as the 40th Governor of Louisiana from 1928 to 1932 and as a member of the United States Senate from 1932 until his assassination in 1935. A Democrat, he was an outspoken populist who denounced the rich and the banks and called for "Share the Wealth." As the political boss of the state he commanded wide networks of supporters and was willing to take forceful action. He established the political prominence of the Long political family.

Long is best known for his Share Our Wealth program, created in 1934 under the motto "Every Man a King." It proposed new wealth redistribution measures in the form of a net asset tax on corporations and individuals to curb the poverty and homelessness endemic nationwide during the Great Depression. To stimulate the economy, Long advocated federal spending on public works, schools and colleges, and old age pensions. He was an ardent critic of the policies of the Federal Reserve System.

A supporter of Franklin D. Roosevelt in the 1932 presidential election, Long split with Roosevelt in June 1933 to plan his own presidential bid for 1936 in alliance with the influential Catholic priest and radio commentator Charles Coughlin. Long was assassinated in 1935 and his national movement soon faded, but his legacy continued in Louisiana through his wife, Senator Rose McConnell Long, and his son, Senator Russell B. Long.

Under Long's leadership, hospitals and educational institutions were expanded, a system of charity hospitals was set up that provided health care for the poor, massive highway construction and free bridges brought an end to rural isolation, and free textbooks for schoolchildren. He remains a controversial figure in Louisiana history, with critics and supporters debating whether he was a dictator, demagogue or populist.

We can see from this that Long ardently fought for the "common man" but wanted to provide the appropriate privileges to him via state power. In this sense, populism under Long merged to some degree with its more predictable cousin, socialism. Socialism was also successful in the 1930s.

What modern-day politicians and others within the military and intelligence complex surely fear about the continued dysfunction of Western economies is that it is making the libertarian point of view better known and better accepted.

The best way to counteract free-market thinking is to create formal parties and political movements that borrow from laissez faire orientations but contain a good deal of state action as well. The Tea Party began within a libertarian context but soon large swaths of the movement were converted to conservatism, at least within a formal political context.

Will the same thing happen in the UK? UKIP is being increasingly successful and may at some point replace the Tories as a dominant party. But whether it will espouse populist or libertarian views is probably increasingly uncertain.

The Economist certainly seems positive about UKIP. But if UKIP does have significant success, its supporters – especially international ones – would do well to analyze its larger platform. The party's platform is summarized in its own literature as follows:

UKIP is a patriotic party that promotes independence: from the EU, and from government interference. We believe in free trade, lower taxes, personal freedom and responsibility.

Okay, in this sense it remains seemingly free-market oriented. But a closer reading of other parts of the platform offers considerable room for state activism on a variety of fronts. The contentious issue of money and central banking is entirely lacking, from what we can tell.

The Economist, as we have seen, has used the word "populist" to describe UKIP. We hope the movement under the charismatic former broker, Nigel Farage, is not drifting in that direction.

Hopefully, UKIP stays the course and makes a real difference in Britain, which is increasingly authoritarian, in our view. We've been big supporters of UKIP in the past and are rooting for it to reach its stated goals.

Of course, we are aware nonetheless that real change is only generated on an individual level, as it was when millions – individually – decided to journey to the New World without much in the way of funds or even prospects.

Today there is no newly discovered physical destination to go to but the horizons provided by the Internet certainly constitute a metaphorical New World of sorts.

Ultimately the definitive status of UKIP and other parties may not be of as much importance as the individual decisions of those who are coming to a more significant understanding of how they fit into the world around them, especially in the West.

This is probably the most significant political movement of all – the individual one.