What does the United State and ISIS have in common?

Actually… a lot. According to the New York Times, ISIS started a pretty effective government. They now appear to be on their last legs. But for a time, ISIS had all the hallmarks of a typical government.

They monopolized control in a geographical area. They collected taxes and administered government services. They provided internal security, as well as a military (to attempt) to repel invaders. They even educated the youth and provided government assistance to widows.

In June 2014, after it captured Mosul, Iraq’s second-largest city, the Islamic State wanted both legitimacy and revenue. To get that, it used armed militants — and seasoned bureaucrats. There were even forms for suicide bombers to fill out.

ISIS took land from ‘nonbelievers,’ and rented  it to those deemed worthy.

The militants targeted landowners who did not share their strict Sunni faith. Then they rented the land out to farmers like Ghanim Khalaf. He wanted five acres — and he found a property that he believed belonged to a Shia family. Workers then went out to map the property and determine whether its former owner practiced the “wrong” religion.

Sorry ISIS, but Karl Marx came up with that idea about 170 years ago. in The Communist Manifesto, Marx and Engels described the steps needed to form a utopian communist government. One step was the “Confiscation of the property of all emigrants and rebels.”

The U.S. has been confiscating property from rebels and giving it to warriors for years. We call it civil asset forfeiture. In 2014, law enforcement in the United States stole over $5 billion worth of cash, cars, and property from people without convicting them if any crime. Burglars stole less than $4 billion from their victims in that same year.

Property is taken through civil asset forfeiture on suspicion only, no trials needed. Instead, people must prove their innocence to get their confiscated property back. Police departments get to keep a percentage of what they steal. The rest goes to the state’s general revenue.

Sure there are some differences between the U.S. and ISIS. But ISIS at least gets their priorities straight. You may think their best skills involve beheadings and building roads, but their true competence rivals the IRS.

The paper trail shows that the militants taxed everything imaginable. When harvest time neared, farmers who were already paying rent needed yet another government form…

It allowed an ISIS-directed combine driver to harvest the crop. Ten percent of the harvest was taken as a religious tax. To sell the rest, farmers needed a tax receipt…

Hang on a second… ISIS only taxes their citizens at 10%?! Damn ISIS! Somebody has been studying economics.

Within days of taking the city, the militants handed out their City Charter. It spelled out new rules: no smoking, drinking or stealing. Women had to be veiled. Prayer times were to be strictly observed.

Well, that doesn’t sound fun. Actually, it sounds sort of like some of the first governments in New England back in the 1600’s.

Residents soon came to know and fear the religious police, whose vehicles bore official ISIS license plates. The militants had their own D.M.V.

Allah save them! Beheadings are one thing but the D.M.V. is cruel and unusual punishment.

The officers began issuing citations to rule breakers. People who signed the form below agreed to accept any punishment the government saw fit to impose if they broke the rule again: “I, the undersigned, pledge not to cut or trim my beard again. If I do that again, I will be subject to all kinds of punishment that the Hisba Center may take against me.”

And there were many rules to break. One day, a group of 13- and 14-year-old boys were taken into custody. Their offense: “making fun during prayer.”

To be fair, American police would have just shot them if they were inner-city youth. And at least ISIS takes the time to educate the children! Look at one of their textbooks (I especially like the picture of a woman, and that M is for Martyr): 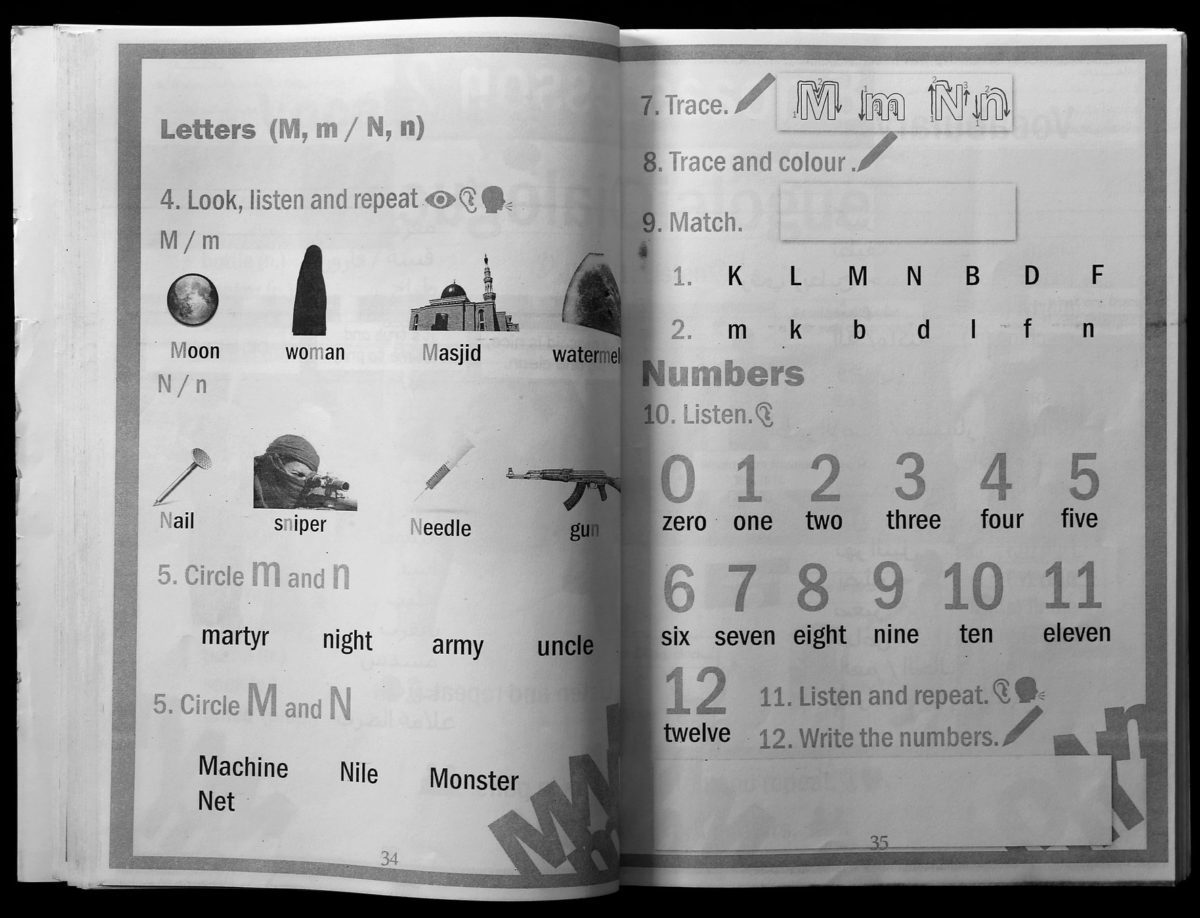 The Islamic State’s authority extended to the cradle. Babies born under the caliphate’s black flag were issued birth certificates on ISIS stationery.

I love how the publications like New York Times writes these articles as if it is something shocking that ISIS is just another crappy government. It is all just a matter of degree.

A few years ago, Reuters published a similar article:

The group famous for its beheadings, crucifixions and mass executions provides electricity and water, pays salaries, controls traffic, and runs nearly everything from bakeries and banks to schools, courts and mosques.

While its merciless battlefield tactics and its imposition of its austere vision of Islamic law have won the group headlines, residents say much of its power lies in its efficient and often deeply pragmatic ability to govern.

Well, the government may be murdering people… but without them who would keep the electricity on, provide water, build the roads, and teach the children? Same goes for ISIS! Zing!

…even activists opposed to the group described how it had built up a structure similar to a modern government in less than a year under its chief, Abu Bakr al-Baghdadi.

Reuters journalists are unable to visit the area for security reasons.

…the group “has restored and restructured all the institutions that are related to services,” including a consumer protection office and the civil judiciary, the resident said.

They made their own Consumer Financial Protection Bureau just two years after the United States. And how might the Islamic State be making sure consumers are protected properly?

Prices are also kept low. Traders who manipulate prices are punished, warned and shut down if they are caught again.

The group has also imposed Islamic taxes on wealthy traders and families. “We are only implementing Islam, zakat is an Islamic tax imposed by God,” said a jihadi in Raqqa.

Well ISIS was certainly not the first government to implement price controls.

And how progressive of them to go after the super wealthy for taxes, in order to get everyone to pay their fair share. Having God demand the taxes is an interesting marketing technique, but that went out of vogue at least a century ago in the United States.

And at least the Islamic State spreads the wealth around and takes care of the poor. Look what they do with the proceeds of their holy taxes:

Fighters receive housing – including in homes confiscated from local non-Sunnis or from government employees who fled the area – as well as about $400 to $600 per month, enough to pay for a basic lifestyle in Syria’s poor northeast.

One fighter said poor families were given money. A widow may receive $100 for herself and for each child she has, he said.

But whatever ISIS does, it is always for the children!

The group has also invested heavily in the next generation by inducting children into their ideology. Primary, secondary and university programs now include more about Islam.

The group also accepts women who want to fight – they are trained about “the real Islam” and the reasons for fighting.

Oh lordy, in America we don’t induct, we simply allow the government to choose what the children will learn and keep them locked up in government institutions for 12 years so that they will fit into society better. But we don’t indoctrinate!

In northern Syria, there may be a civil war, but at least there’s no war on women.

Reflecting Islamic State’s assertion that it is a government – rather than simply a militant group that happens to govern – Baghdadi has also separated military operations from civilian administration, assigning fighters only as police and soldiers.

Don’t get me wrong, I would rather live in the United States than in the Islamic State. The degree to which the government oppresses the people is certainly different, as is the type of oppression.

But the foundation and philosophy of each government is no different. Neither have the “right” to rule us. Both enforce a monopoly of control where individuals must comply or face violence.

And when we allow these people to control our lives, we have little choice whether we end up with ISIS or the US government.