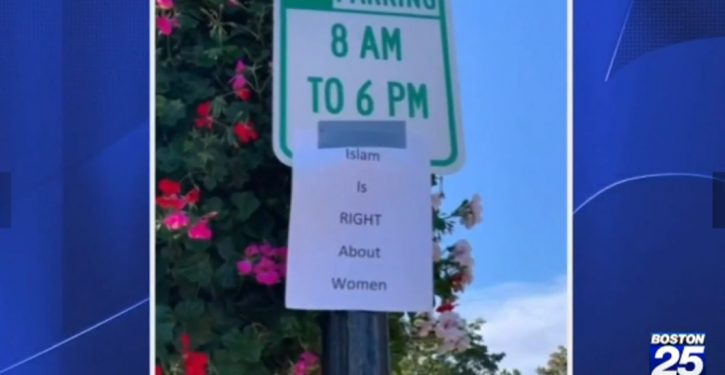 No one knows who put up homemade signs in a Massachusetts town which read, “Islam is right about women.”

One woman, offended by the signs, tore them down, and contacted the police.

She’s all for free speech, she said, but suspected this was hate speech, perhaps against Muslims, maybe towards women… or both?

But when asked to elaborate about why she was offended, the woman couldn’t quite articulate why.

No one who the local news interviewed could say what exactly was offensive about the signs. All they knew, was that it was hateful to put up these signs.

Of course, the real reason these signs offend women is that Shariah law does not treat women as equals to men.

Traditional Islamic gender roles dictate that wives must submit to the will of their husbands, and seek permission to leave the home and work.

But, under the Social Justice Warrior ethos, women are just one of many disenfranchised groups. And Muslims rank above them, apparently, on the oppressed scale.

That’s what they call intersectionality.

So if you’re “woke” you can’t acknowledge anything wrong with Islam, including gender roles.

That’s likely why the signs were put up, to spark this debate.

And it certainly revealed some Orwellian double-think.

Somehow, these people think the signs targetted both women and Muslims.

But why on earth would a devout Muslim think it is offensive for someone to simply state that their religion is correct?