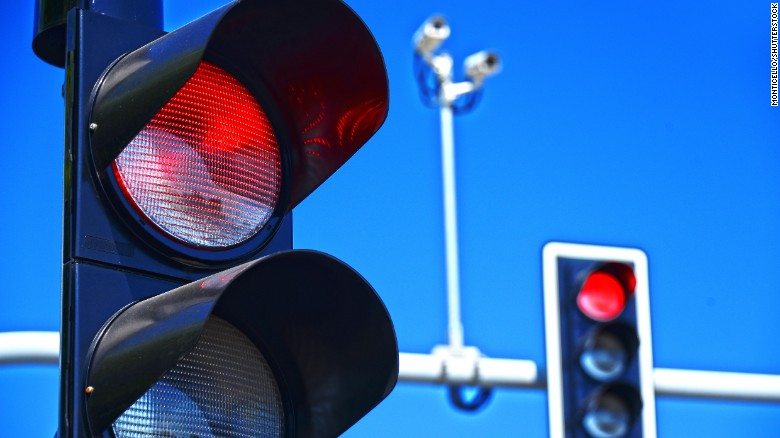 Should free speech cover criticizing the government? That is kind of the whole point, right?

An Oregon man is suing Portland for violating his first amendment right to free speech after he was fined $500 for calculating how long yellow lights stay yellow and then speaking publicly about it.

Free speech? No. The city considers making and disseminating calculations about public works “engineering without a license.”

This is a civil-rights lawsuit to vindicate the right of Plaintiff Mats Järlström to talk and write freely without fear of government punishment. Järlström wants to write and speak publicly about a matter of local, state, and nationwide concern: the safety and fairness of traffic lights and traffic-light cameras. Specifically, Järlström wishes to communicate about the mathematics behind traffic-light timing. If he does so in Oregon, however, he will be exposed to government investigation and punishment for engaging in the unlicensed “practice of engineering.” In fact, between February 2015 and January 2017, Järlström was investigated and fined for “critiquing” the standard formula for calculating traffic-light timing and for sharing his ideas with “members of the public.” Under Oregon’s Professional Engineer Registration Act (Act), Or. Rev. Stat. §§ 672.002 et seq., only state-licensed professional engineers are entitled to speak publicly on these sorts of topics. For everyone else—in the words of the Oregon State Board of Examiners for Engineering and Land Surveying (Board)—sharing “reports, commentary, and testimony” on technical subjects is “clearly not protected speech.”

…But speech like Järlström’s is exactly what the First Amendment’s Speech and Petition Clauses exist to protect.

Obviously, the city is just trying to silence and intimidate him so they can keep making money off of red light cameras. His point was that the yellow lights were too short to properly allow motorists to stop.

By the government’s definition of free speech, you basically are not allowed to criticize or even petition the government at all.

What if this same standard was applied elsewhere in government?

We could easily get to a point where any speech about government actions is not protected unless you are an expert in the field–the government, of course, deciding who qualifies as an expert.

Should accountants be the only ones allowed to publicly advocate a tax policy?  Perhaps only licensed law enforcement could criticize the police. And surely if you are not a legislator, the intricacies of bills and laws are off limits to discuss.

What an open and public dialogue that would promote!

And as for the issue of traffic light cameras issuing tickets, that in itself should never have been permitted. The government takes a picture of a car and accuses the owner of a crime, regardless of who was driving the vehicle. And then, you must either pay the fine or prove yourself innocent! So much for due process. So much for the government having to prove you committed a crime. Innocent until proven guilty? What an inconvenience for a government!

There are various reports online of how to beat a red light camera traffic ticket. Even so, it will take multiple visits to the court, which waste time and money, and even then you might be forced to fork over the cash!

That is why most people just pay the fine, and forget about it. The system is rigged against the recipients of tickets. Everyone knows the time wasted in fighting a traffic ticket will overshadow any money saved if it is dismissed.

Still, if you have the time, and are bothered by the principle of it, it may be worth fighting the ticket to at least make the court work for its theft.

Interestingly, one of the tutorials online about how to fight traffic cameras suggests visiting the site of the infraction:

Time the traffic light as it transitions from yellow-to-red. If the timing is minimal, you might be able to stage an argument in court that there is not enough time to safely bring your vehicle to a stop at the particular intersection.

Would Oregon even allow this evidence in court? Perhaps they would instead slap and extra fine on top of the red light ticket for public engineering. After all, only state licensed engineers are allowed to testify publicly on technical issues.