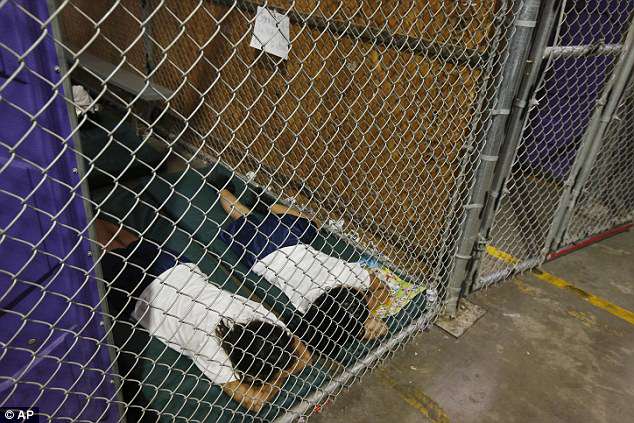 Have you seen the picture floating around of the detained immigrant children in what looks like a dog kennel?

The only problem was that the picture was from 2014 when Obama was President.

But today saw an embarrassing climb down from the outrage of yesterday, as people realized the images actually date from 2014, under the former administration – although it still reveals some of the shocking conditions ICE detainees have been forced to endure by ICE, (Immigration and Customs Enforcement).

Suddenly Obama’s abuses are outrageous… but only when people think Trump did it.

The truth is that freedom has been evaporating in this country for quite some time. But that doesn’t quite fit the trope that things are quickly unraveling in the “land of the free” under Trump.

Am I excited to see people speaking out against abuses of power? Of course! The way that customs treats foreigners is disgusting. The way that ICE treats immigrants, denying them due process, is abominable. But if people think this is a problem only when Republicans are in power, the issues will never be solved.

Bush’s wars and wartime powers continued under Obama. And Obama’s swelling government expenditures and debt keep ballooning under Trump. All three of these Presidents have trampled individual rights and due process.

Yet ironically, as power swings from side to side, each faction only expresses alarm and dismay when the other side is in power. And this virtually guarantees that the system, from the ground up, never gets the blame it deserves.

The Huffington Post Recently ran an article called, This Administration Now Has The Power To Indefinitely Detain Americans Without Charge Or Trial.

The article was about the provisions of the National Defense Authorization Act which allow the President to detain indefinitely anyone suspected of terrorism, but not charged with any crime. Of course, the article readily admits that these powers were first included in the NDAA in 2012 under Obama. But only now should we be worried, according to the Huffington Post, that one man has such immense and unchecked powers.

“An Obama Era unconstitutional power has landed in Trump’s lap. And we should be very, very, very, scared.” That’s the teaser for the article. Like who could have ever predicted that Obama wouldn’t be President forever?

And then the article goes on to give egregious examples of the government abusing the power.

Documents obtained from multiple federal agencies show just how dangerous and confusing these sections can be when interpreted and applied by the government. Congressmen, Air National Guard colonels, and even seven-year olds have been placed on terrorist watch lists after being classified as “reverent of individual liberty”, “suspicious of centralized federal authority”, “supportive of [Presidential candidates] Ron Paul and Bob Barr” or “insisting on paying with cash.”

But again, all those things happened before Trump. The theme of the article is that Obama was a saint who could wield excessive power for good. But now that Trump is in power, all those authorities will surely be abused.

It was a terrible affront to individual liberty in 2012, and it is the same now. The victims of the government abuse might differ, but the abuse remains.

I had hoped that perhaps the progressive left would realize the folly of an immense centralized powerful government when that power fell into “the wrong” hands.

Hell, I thought perhaps the Bernie supporters could become supporters of true liberty when Hillary pulled her shady tricks to win the nomination.

When Romney did the same to Ron Paul in 2012 to secure the Republican nomination, it certainly woke a lot of freedom fighters.

But perhaps there is a fundamental difference in personal philosophies between people who gravitate towards collectivist versus individualist political solutions.

Since progressives don’t like the presumed “ends” that Trump has in mind, they want to limit his means. But when Obama had those means, whatever evil was done could be justified by the alleged positive ends.

But whatever good could be accomplished in the short term with excessive government power would lead to worse outcomes in the future when that power is abused, by the same or a different wielder.

That’s why Gandalf did not accept the Ring when Frodo offered it to him–even a soul as pure as he could not wield it without becoming a tyrant. Sorry for nerding out.

There is no choice when you subscribe to a collectivist philosophy. If you put others in charge of your life, you are at the whims of people you don’t know, who you cannot possibly trust, and whose motives you cannot even begin to decipher.

Eventually, someone will harm you with the power you have granted them. For Obama supporters, their bill came due when Trump got elected. And Trump supporters should be wary of the still expanding Presidential powers, regardless of how entertaining Trump can be.

The only true choice is whether individuals should have control over their destiny, or whether the majority can assert their power over any minority, including the individual.

Whether collectivists realize it or not, they voted to put those kids in cages separated from their families. They voted for Trump to inherit the Obama era powers of indefinite detention, war without congressional approval, and unrestrained federal policing agencies.

But individuals have the ability to vote every day with their actions.