Subsets of the intersectional left would have you believe that a 6″3′ (likely clinically narcissistic) man, packing visible external genitalia while crushing female NCAA competitors, is a modern civil rights hero — on par with Jackie Robinson in his social justice achievements through sport:

“For anyone who cares about the advancement of sports, and women’s sports in particular, [Lia Thomas’] win should be celebrated… Today, athletes like Jackie Robinson are celebrated as ‘breaking the color barrier’ in sports… Many of the athletes who become the ‘first’ encounter resistance, backlash and opposition, especially from those who have historically benefited from the status quo in sports… Part of what makes the ‘first’ stories so compelling is the resilience, determination and love for the sport exhibited by these athletes and their motivation to break down barriers.”

Lia Thomas certainly broke something – the spirits of his female competitors, apparently a full foot shorter than him, not least among them. 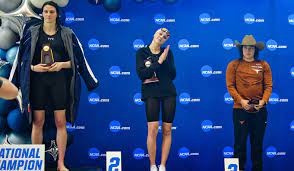 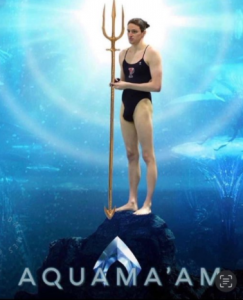 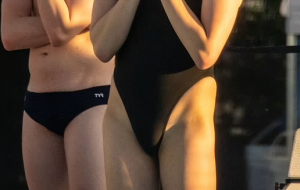 Slay Queen Lia Thomas’ delicate lady parts, his secret superpower, which he wields to terrorize his female teammates in the locker room

What’s most interesting in this gender-dysphoria melodrama are the schisms it reveals between various factions of the SJW coalition as they struggle to maintain their untenable alliance.

NBC News apparently changed its celebratory headline lauding Thomas’ “achievements” after enough shame – not because the original one was patently absurd, but because elevating Lia Thomas to the level of Jackie Robinson caused a racialism-vs-transgenderism rift in the fragile intersectional coalition.

First, they steal opportunities from women.

Then, they tell us we “should be celebrating” this as a victory for women.

A Masterclass in Gaslighting. https://t.co/l3j2psulIF

Conventional feminists like Abigail Shier and JK Rowling – bitter clingers to such outrageous notions as “female humans with vaginas are women” – are easier to dismiss than racial activists. Female feminists who believe in basic biology are now persona non grata (because the tenants of their outdated ideology don’t serve the transhumanist agenda as we’ve written about previously).

That’s why JK Rowling has been relegated to the sidelines, and why white feminist critiques of Lia Thomas’ “victory” for women’s sports lack teeth. The feminist (so-called “trans-exclusionary radical feminist” or “TERF”) objections, which fail to gain traction whenever they challenge leftist gender ideology, were not what triggered NBC’s headline re-write.

However, the oppression of blacks still reigns supreme in social justice circles. It’s the cream of the oppression crop. When BLM-type social justice activists with large platforms voice outrage over such an NBC headline on the grounds that it’s racist, that’s when its editors take note. That’s when headlines get altered overnight, Animal Farm-style.

This white female professor who wrote this article has the gall to compare this farce to collective struggle of BLACK people.
And for @NBCNews and the mega corporation to give this a platform shows how DESPERATE they are attack Black people's interests.https://t.co/TkSYtHrxBq

Given the blasphemous Jackie Robinson-Lia Thomas comparison, alterations were demanded. 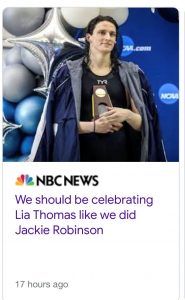 In the oppression hierarchy, BIPOCs (insular jargon for “black and indigenous people of color”) are the Aces in the deck; they always win out. Accordingly, the Lia Thomas-Jackie Robinson comparison was deemed a bridge too far – at least for the time being.

As hard as the LGBTQ+++© proponents push – and they literally have never pushed harder than they are in 2022, most notably in terms of targeting children – they haven’t yet overtaken the more well-entrenched racial justice people at the summit.

For example, daring to ask such a celestial being as Kentaji questions, at a hearing intended for elected representatives of the people to ask hard questions, is racist.

Those are our values, and that’s how democracy works.

Get it, bigot? Asking a nominee for the most powerful government body responsible for interpreting law about her judicial record on sentencing in child sex crimes, or about teaching critical race theory to five-year-olds, isn’t due diligence – it’s a hate crime!

The central point here is that, in Neoliberal Church© canon, individual circumstance factors precisely 0 into the oppression hierarchy calculation. 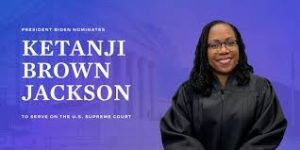 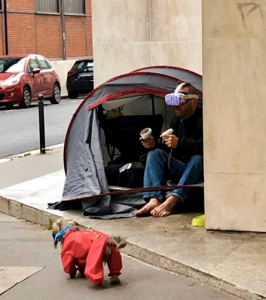 From time to time, proponents of social justice gender ideology frequently test the waters — as exemplified in the Lia Thomas-Jackie Robinson fiasco — to see what they are allowed to get away with rhetorically.

Like members of the communist politburo jockeying for position, they are forever engaged in intra-party power struggles to achieve domination in the oppression hierarchy for their preferred identity group.

Perhaps one day, with enough perseverance, transgenderism will surpass marginalized racial sub-groups like blacks and indigenous to take their rightful place atop the apex. But — as gender studies professor Cheryl Cooky found out — for now, transgender hegemony is merely a dream.

Yet, it’s not all bad news for the transgender cause. Consider this racist question posed to the aforementioned Supreme Court nominee Ketanji Brown Jackson in her confirmation hearing. Note her remarkable inability to answer what a toddler would be capable of answering:

Ketanji Brown Jackson knows well what a woman is – her status as one, in addition to her race, is literally the reason she was sitting in that chair that day. Joe Biden explicitly said so.

But Ketanji also knows that, were she to answer that question truthfully, she’d be skewered by the trans faction of the intersectional feminist coalition, and would perhaps even jeopardize her chances of confirmation to the high court in the process.

They made a high-profile example out of JK Rowling – who was, before her shunning, was a highly celebrated hero of the left – for stating in public what a woman was. Vapid politicians climbing the pyramid took notice, and now understand they are not to publicly challenge transgender dogma.

So, you see, even the most celebrated SJW feminist icons such as Kentaji or (formerly) Rowling aren’t free any longer to violate Liberal Church© gender ideology orthodoxy in public by describing what a woman is.