“It is inaccurate to say that I hate everything. I am strongly in favor of common sense, common honesty, and common decency. This makes me forever ineligible for public office.”
– Sage of Baltimore, H.L. Mencken

Word of her exit was met with a chorus of fawning “thank you for everything” and “good lucks” from her adoring fanbase – the journalists ostensibly tasked with asking her tough questions.

Psaki will take up a new job as a talking head at MSNBC, to cash out millions on her government “service.” To boot, she’ll almost certainly nab a multi-million-dollar, tell-all memoir book deal about her stunning bravery standing up to MAGA terrorists and misogynist trolls. 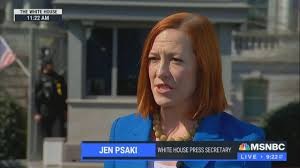 What spectacle of corruption the American people have laid bare before them is a shameless, open-air circle jerk.

There is no longer even the veneer of separation between the state and the media tasked with holding the state to account.

The media, in theory, should function as independent and adversarial to the state as a check on institutional power – the sole justification for its existence.

But what happens when the media is the state?

Psaki’s replacement is a woman of color named Karine Jean-Pierre. Psaki essentially admitted in her hand-off lovefest press conference that Jean-Pierre is a diversity hire:

“So, I just want to take the opportunity to celebrate and congratulate my friend, my colleague, my partner in truth, Karine Jean-Pierre, the next White House Press Secretary…
First, as you all know, she will be the first Black woman, the first out LGBTQ+ person to serve in this role, which is amazing, because representation matters.  And she is going to — she will give a voice to so many.”

Jean-Pierre’s immutable characteristics, which are not accomplishments, are what Psaki led with in her introduction.

To paraphrase: “Your most impressive feature – the singular reason we handpicked you — is on account of your skin color and your genitalia and who you grant access to that genitalia.” 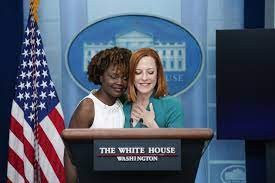 On the LGBTQ4GF150©+++ front, Jean-Pierre is a lesbian. Her partner is CNN talking head Suzanne Malveaux. Chances are, once Jean-Pierre gets done shilling for the Biden administration, she’ll join Malveaux in the CNN studio if MSNBC doesn’t scoop her up first.

They met at the 2012 Democratic National Convention in North Carolina. 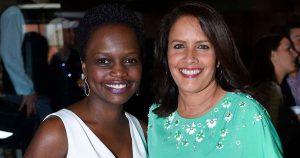 And you thought incest was illegal in the civilized world!

Check out Jean-Pierre’s opining moralizations when asked what her new appointment means — as if climbing the slimy government hierarchy, sacrificing whatever integrity you had to begin with at each step, is some grand exercise in virtue:

“You know, I used to… teach college students… And they would ask me… ‘How did you get to where you got to?’  And I would say to them… Follow your passion.  Follow what you believe in… And, yes, you’ll be knocked down and you’ll have some tough times.  And it won’t be easy all the time, but the rewards are pretty amazing, especially if you stay true to yourself.”

Gag me with a spoon!

The only thing that slithering into the position of chief WH propagandist proves is that one is willing to tell even the most outrageous lie with a straight face. And even beyond just maintaining a straight face, delivering calculated lies with an air of unearned moral superiority.

Jean-Pierre probably could’ve made an honest living selecting any one of thousands of career paths that didn’t require manipulating unsuspecting marks as task #1 in the job description.