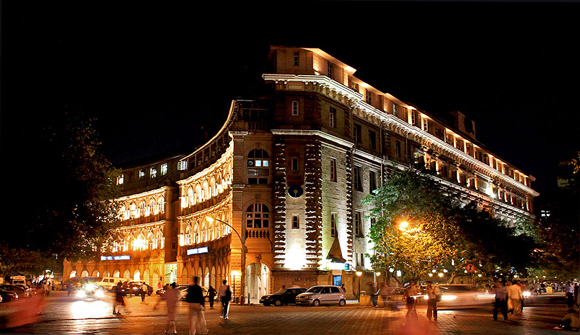 India Banks Are Finally Looking Better, And So Is Their Economy … Moody's raised national banks credit outlooks to stable from negative. Non­performing loans on the books of Indian banks are showing signs of improvement, and so is the nation's economy. Despite some much publicized disses of the Indian investment story, mainly from emerging market commodity guru Jim Rogers, India is still the strongest of the BRICs. Moody's … cautioned that any recovery in asset quality would be gradual given the high debt levels in Indian companies. – Forbes

Free-Market Analysis: We don't mean to pick on Forbes – this is a well-written and well-reasoned article – but we generally have trouble getting excited about India from a business and investment standpoint. Certainly the country has come a long way but it still has troubles given its massive bureaucracy, repressive caste system and seemingly intractable poverty.

The longer view, then, is a somewhat depressing one. But the Forbes article we've excerpted takes a shorter and more cheerful perspective. Moody's upgrade may signal a flood of new investment into India and finally fulfill the promise of Narendra Modi's Prime Ministership. Modi's claim to fame is the way he built up his home state of Gujarat by wooing multinational investments and generally making it known India was open for business.

To its credit, the Forbes article is not relentlessly optimistic. The author points out that India's banks are carrying perhaps $50 billion in non-performing loans. But Moody's believes that India is now in a position to outperform China regarding GDP in percentage terms. More from Forbes:

The article – as we can see from the initial excerpt – does try to defend India from recent criticism received from a famous investor, Jim Rogers, whom we have interviewed numerous times.

Jim Rogers, Forbes writes, "dissed" India in the past few months. We did some searching and found the article in question, written in early September and entitled "Jim Rogers exits India, says one can't invest just on hope" posted at LiveMint.com. Here's an excerpt:

Jim Rogers exits India, says one can't invest just on hope Rogers said he has sold all his India shares as he saw nothing new coming from Prime Minister Narendra Modi. He said he may return to India at some stage if Narendra Modi starts doing things, or if the markets go down a lot.

"I am sure Modi is a smart guy, he enjoys good press, and he makes a lot of friends for India. But I, as an investor, after almost a year-and-a-half, have decided to move on to other places, partly also because stock markets are not going to be particularly good for the next year or two," Rogers said in an interview.

You can't just invest on hope. Even If reforms started coming, it may not be enough to make the markets go higher, because markets have already factored it in. If the reforms are substantial, the markets may go higher. No indication of that.

Rogers cites additional issues that may be holding India back including taxes and regulations. The election of Modi held out hope that changes would begin to come to India sooner rather than later, but – in selling his Indian positions – Rogers showed he wasn't willing to wait any longer.

In an interview with Jay Taylor at the end of last year, Rogers talked about investing in Russia (something, in fact, he had mentioned even prior to that). He said that after more than four decades of avoiding Russia, he recently had begun to change his mind. In the interview, he said Russia seemed to be offering a more business friendly environment.

Is it possible that Rogers might replace his Indian portfolio with a Russian one? We couldn't find anything very recent about Rogers's Russian investments but in his Taylor interview he sounded emphatic about the possibilities and mentioned the Ukraine conflict as well.

Referring to the Ukraine conflict, he pointed out it had significantly damaged the value of the ruble and that "when things are collapsing, you should be looking that way, not running away." Rogers said he'd begun making some exploratory purchases, most prominently an investment in a fertilizer company. He even said he might take a larger position – though perhaps Russia's recent adventures in Syria have discouraged him.

Nonetheless, this is in keeping with another one of Rogers's investment preferences, which is farmland. Rogers has long been on the record as stating his interest in gaining more farmland exposure and perhaps an investment in a fertilizer company is one way to do it.

It's Rogers's position that as prosperity increases around the world, some three billion additional consumers will expand demand for various kinds of agricultural products and spinoffs. He sees this sector as a promising one because it is has little to do directly with the financial industry and is instead being driven by real demand.

Here at The Daily Bell, we share Rogers's interest in farmland and the world's ever-expanding demand for food. We'll continue to report on this promising sector and will provide ongoing coverage via our newswire. You can subscribe below. It's free.