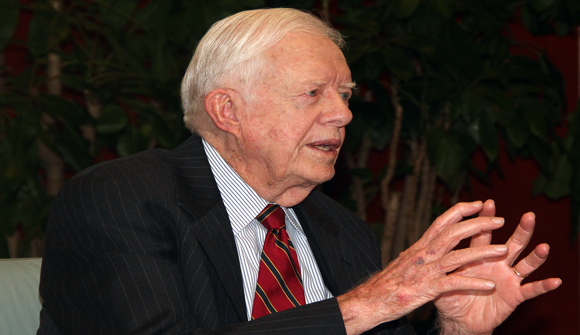 Former President Jimmy Carter spoke with the Thom Hartmann Program earlier this week about "political bribery" in the United States, saying it's created "a complete subversion of our political system as a payoff to major contributors."

Carter was asked about Supreme Court cases like Citizens United, which he said has turned America into an "oligarchy."

"It violates the essence of what made America a great country in its political system. Now it's just an oligarchy, with unlimited political bribery being the essence of getting the nominations for president or to elect the president," Carter said.

Carter said the power of money isn't limited to just the presidency, claiming "the same thing" applies to lawmakers on the state level and in Congress.

"The incumbents, Democrats and Republicans, look upon this unlimited money as a great benefit to themselves," Carter said. "Somebody's who's already in Congress has a lot more to sell to an avid contributor than somebody who's just a challenger." – Huffington Post, July 31, 2015

Americans were ready for a change when Jimmy Carter left office in 1981. No amount of money would have outweighed the damage a weak economy and an Iranian hostage crisis did to his presidency.

Almost 35 years later, Carter is now the longest surviving ex-president in U.S. history. That's a long time to observe and reflect. He has little to lose by being honest, so his comments last week deserve some attention.

Carter blasted both major parties and from state legislatures up to Congress. The U.S., he believes, is an oligarchy built on unlimited political bribery. Those are strong words. We see them on sites like The Daily Bell, but considerably less often from those inside the oligarchy.

We find it interesting that web sites across the political spectrum reported Carter's comments, from Newsmax to Daily Kos. Why do editors of such different views think their readers would find this quote interesting?

The definition of oligarchy is "a small group of people having control of a country." We are not aware of any survey data on this point (though last year's Princeton study comes to mind), but many Americans would agree that "oligarchy" describes the United States in 2015. They disagree on who they believe is in the controlling group.

We are approaching, and perhaps already are at, a point where oligarchy is seen as normal and natural. People don't mind living under oligarchy as long as the "right" people control it. Donald Trump's popularity is a good example. He appeals to certain voters precisely because he would replace the current political oligarchy with a business-friendly oligarchy. They want to switch one oligarchy for another one. They think it would be an improvement.

Are they right? We don't know, but we are saddened to think how few Americans find oligarchy unacceptable on principle, no matter who runs it. Raw power is all that matters. Perhaps it was always so.

We don't think Jimmy Carter was a great president and we would likely disagree with his solution to this problem. We are nevertheless glad he said this. History may show the nation should have paid more attention. Our rule by oligarchy will not end well.