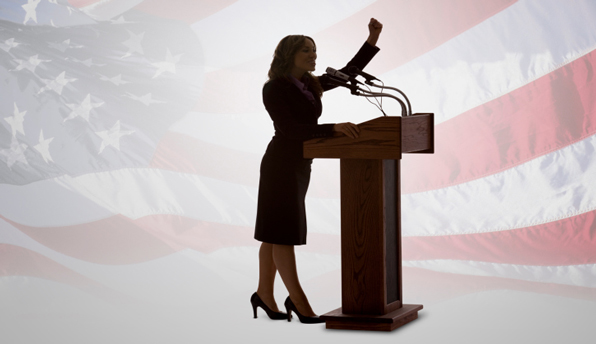 From Austerity to Abundance: Why I Am Running for California Treasurer … Governor Jerry Brown and his staff are exchanging high-fives over balancing California's budget, but the people on whose backs it was balanced are not rejoicing. The state's high-wire act has been called "the ultimate in austerity budgets." … There is another way to balance a state budget, one that leads to prosperity rather than austerity. California can stimulate its economy and the job market, restore low-cost higher education, build 21st-century infrastructure, preserve the environment, and relieve the state's debt burden, by establishing a bank that is owned by the people and returns its profits to the people. – EllenBrown.com

Dominant Social Theme: If "the people" run central banking everything will be swell.

Free-Market Analysis: If we can do one thing in this life, it would be to expose the economic gobbledygook behind the resurgence of "public banking" economics once and for all.

Ellen Brown is seemingly a kind person – an engaging individual, erudite and obviously well meaning in many ways. But her economics are a disaster. She is now running on the Green ticket and thus probably won't win, but she will surely elevate awareness of her platform and therefore will bring public banking/anti-usury economics further into the "mainstream."

She is not alone in her effort. Bill Still and a cadre of others – along with the US Intel community, in our view – are trying desperately to recreate the populism of the 1800s and, more pertinently, of the 1930s.

The private/public Federal Reserve model is failing and thus powerful banking factions and the Intel agencies they interact with are trying to set up the next model, which is public banking. The idea is that by misleading people about what public banking is and does, people will be drawn into supporting this meme.

The problem is the "monopoly" franchise delivered to the central bank by the state. Modern central banks effectively have a stranglehold on money creation. From five central banks at the beginning of the century, some 150 have been created now, mostly coordinated by the Bank for International Settlements.

Those who wish to confuse the issue will often point out that commercial banks "create" most of the money in circulation, but it is the central bank that sets the initial volume and price of money and is responsible for the balance sheets of commercial banks. Without central banking, the entire system of modern finance would founder. That's why central bankers journey to the BIS every month in Switzerland to "coordinate" policy rather than a gaggle of commercial bankers.

The other pillar of the modern state is corporate personhood, another state-mandated facility. Monopoly central banking and corporate personhood are both buttressed by state force. Without these two elements, modern societies would look a lot different – more like the locally-based agrarian/republican communities that Thomas Jefferson envisioned.

Ellen Brown is going in the other direction, however. She and her supporters have decided the antidote to big government is MORE big government – just a different kind. Here's more from Ms. Brown's article:

In the 1960s, the governor of California was Jerry Brown's father Pat Brown, a New Deal visionary who believed that investment in education, infrastructure and local business was an investment in the future. Our goal is to revive that optimistic vision in 2014.

The bank uses its copious capital and deposit pool to generate credit for local purposes. The BND is a major money-maker for the state, returning a sizable dividend annually to the treasury. Every year since the 2008 banking crisis, it has reported a return on investment of between 17 percent and 26 percent.

The BND also provides what is essentially interest-free credit for state projects, since the state owns the bank and gets the interest back. The BND partners with local banks rather than competing with them, strengthening their capital and deposit bases and allowing them to keep loans on their books rather than having to sell them off to investors.

This practice allowed North Dakota to avoid the subprime crisis that destroyed the housing market in other states. Consider the awesome potential for California, with its massive capital and deposit bases … What could California do with $155 billion in interest-free credit?

… As voters become increasingly disillusioned with big-corporate-money candidates, the third party option is gaining traction. According to a recent Gallup poll, in 2013 42% of Americans identified themselves as political independents, significantly outpacing Democrats at 31% and Republicans at 25%.

We can see that Ellen Brown is actually a believer in the New Deal and the coercion of the state. She is comfortable with the idea that the state should print money – preferably interest free at various levels – and hand it out. Instead of a bunch of little giveaways, the state should condense giveaways into one big program.

This sort of technocratic thinking has been increasingly endorsed at the top levels of elite finance. That's one of the reasons we consider it to be a dominant social theme – you can see these ideas being promoted over time.

In fact, these ideas in some detail go back to the 1930s and the crackpottery of Silvio Gesell who wanted government to depreciate money every month – and stamp it – in order to increase its velocity and thus, he believed, prosperity.

Gesell's partner in crackpottery, Major Douglas, wanted to mathematically determine how much money "industry" made each year and then give the excess back to the "worker." He called Gesell's ideas a horrible tax.

The ideas of these populists, along with various anti-usury ideas, were picked up as part of the expansion of fascism in the 1930s. Adolf Hitler was attracted both to a "people's" central bank and anti-usury programs.

Of course, Hitler – being economically illiterate – didn't understand that normal interest lending was merely an expression of the time-value preference of money.

It was the idea of German fascists of the time that if only Leviathan were controlled by "the people" instead of a cabal of Jewish bankers, then all would be well with the world. We would have, in the words of Ellen Brown, above, "prosperity rather than austerity."

Ellen Brown is now engaged in a similar type of campaign. She is no Hitler, of course; instead she is a self-confessed neo/New Dealer. But essentially what she wishes to create is a monopoly central bank writ small. She is perfectly satisfied with many of the essential elements of Leviathan. She simply wants to redirect the largesse.

At one point, Ms. Brown had kind words for both India's central bank and China's – if we recall correctly – because both of these banks were supposedly "controlled by the people," via the state.

This was part of a distinction she made – along with others – that modern central banks are "private" and that by making them "public," abuses would be mitigated. The lamentable achievements of the central banks of India and China eventually weaned her from these arguments. But now she is making the same arguments about state banks.

It is really too bad. Leviathan cannot become a positive force simply by reconfiguring its operations. Bigness is inevitably corrosive and corrupting. Ms. Brown has the wrong idea.

The solution is a simple one, however. People need to educate themselves, take responsibility for their actions and also take "human action" to support themselves, their families and their communities in ways that provide self-sufficiency.

What will change society for the better is self-education and the willingness to wean oneself from the larger dynamic of Leviathan. One can take advantage of modern paradigm – including various investment strategies – but one should never be seduced into believing that modern state can change if the correct technocratic maneuvers are implemented.

On the one hand, we have Ms. Brown, preaching that Leviathan can be sustained and expanded if "usury" is diminished and central banking is controlled by "the people."

On the other hand, we have the Austrian economic paradigm that preaches laissez faire, freedom and the eventual reduction of Leviathan until it is finally of no consequence and cannot further damage culture and society.

The way to deal with the ever-enlarging state is not to try to take it over – as that cannot be done – but to try to diminish it by pursuing self-efficiency and self-education. Withdrawing from the modern Leviathan is a good deal more practical and feasible than trying to change it.