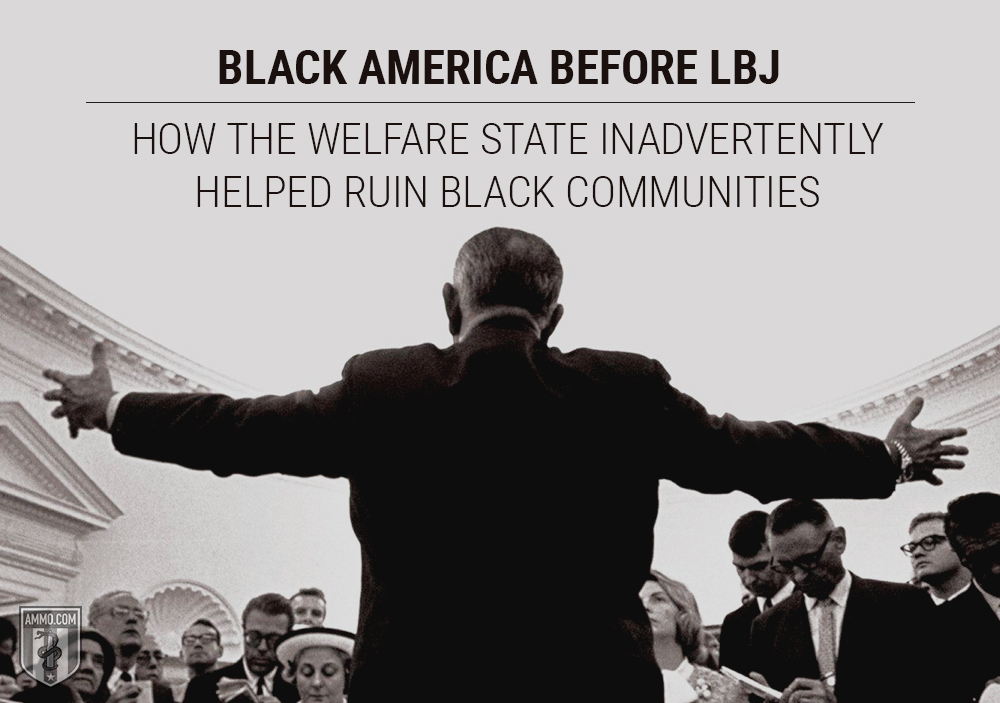 “We waged a war on poverty and poverty won.”

The dust has settled and the evidence is in: The 1960s Great Society and War on Poverty programs of President Lyndon Baines Johnson (LBJ) have been a colossal and giant failure. One might make the argument that social welfare programs are the moral path for a modern government. They cannot, however, make the argument that these are in any way effective at alleviating poverty.

In fact, there is evidence that such aggressive programs might make generational poverty worse. While the notion of a “culture of dependence” is a bit of a cliché in conservative circles, there is evidence that this is indeed the case – that, consciously or not, the welfare state creates a culture where people receive benefits rather than seeking gainful employment or business ownership.

This is not a moral or even a value judgment against the people engaged in such a culture. Again, the claim is not that people “choose to be on welfare,” but simply that social welfare programs incentivize poverty, which has an impact on communities that has nothing to do with individual intent.

We are now over 50 years into the development of the Great Society and the War on Poverty. It is time to take stock in these programs from an objective and evidence-based perspective. When one does that, it is not only clear that the programs have been a failure, but also that they have disproportionately impacted the black community in the United States. The current state of dysfunction in the black community (astronomically high crime rates, very low rates of home ownership and single motherhood as the norm) are not the natural state of the black community in the United States, but closely tied to the role that social welfare programs play. Or as Dr. Thomas Sowell stated:

Here’s a peek into how black America has been a victim of LBJ’s Great Society and War on Poverty.

Defining Terms: What Is the Great Society and the War on Poverty?

Before going further, we must define the terms “Great Society” and “War on Poverty.” These are two overlapping, but somewhat distinct terms that are, in any event, not the same as “welfare” as a whole.

The “War on Poverty” refers to one part of the Great Society, namely the part focused specifically on poverty. When the War on Poverty was started in 1964, the poverty rate in America was 19 percent. Seeing an opportunity to recreate the same New Deal magic that had propelled President Franklin Delano Roosevelt to the White House in four successive elections 30 years earlier, Johnson pushed his War on Poverty.

It’s worth noting that the New Deal has some success to boast in terms of lifting some extremely poor communities, particularly those in the rural South, out of grinding forms of poverty. This was through, for example, mass electrification and other similar campaigns, which radically redefined the experience of the poor in the United States. One can argue about the ethics of redistributive wealth programs, but one cannot argue about whether or not, for example, the electrification of the Tennessee Valley elevated people out of crushing and abject poverty – it did.

There are four primary initiatives of the War on Poverty:

The Economic Opportunity Act, in particular, was insidious in that it gave broad leeway to create programs without Congressional approval or oversight. An example of this is the Head Start program, which is shown to have only extremely limited and short-term effects on the ability of children to succeed in public schools.

The Great Society refers to a far broader set of programs, some of which still exist today, others of which were casualties of both the massive budget for the Vietnam War, LBJ’s other pet project, as well as the passage of time and subsequent Republican administrations. It’s difficult to summarize the Great Society as a whole, precisely because its scope was so broad. Education, health, welfare, culture (the Corporation for Public Broadcasting, for example, is a product of the Great Society), transportation, the environment, housing, labor and rural development were all areas where the Great Society had some hand.

Whereas the New Deal has demonstrably impacted communities with crushing and severe forms of poverty, the Great Society has demonstrably not only not “worked” by any available metric, it has also created a negative impact, most severely felt in the black community in the United States.

This article will make the case that the Great Society is the greatest disaster to befall America’s black community since slavery.

What Were the Goals of the Great Society?

Some discussion of the goals of the Great Society and its historical context are in order. The Great Society was seen by LBJ as nothing less than the completion of the New Deal as pioneered by his predecessor and mentor, Franklin Delano Roosevelt. 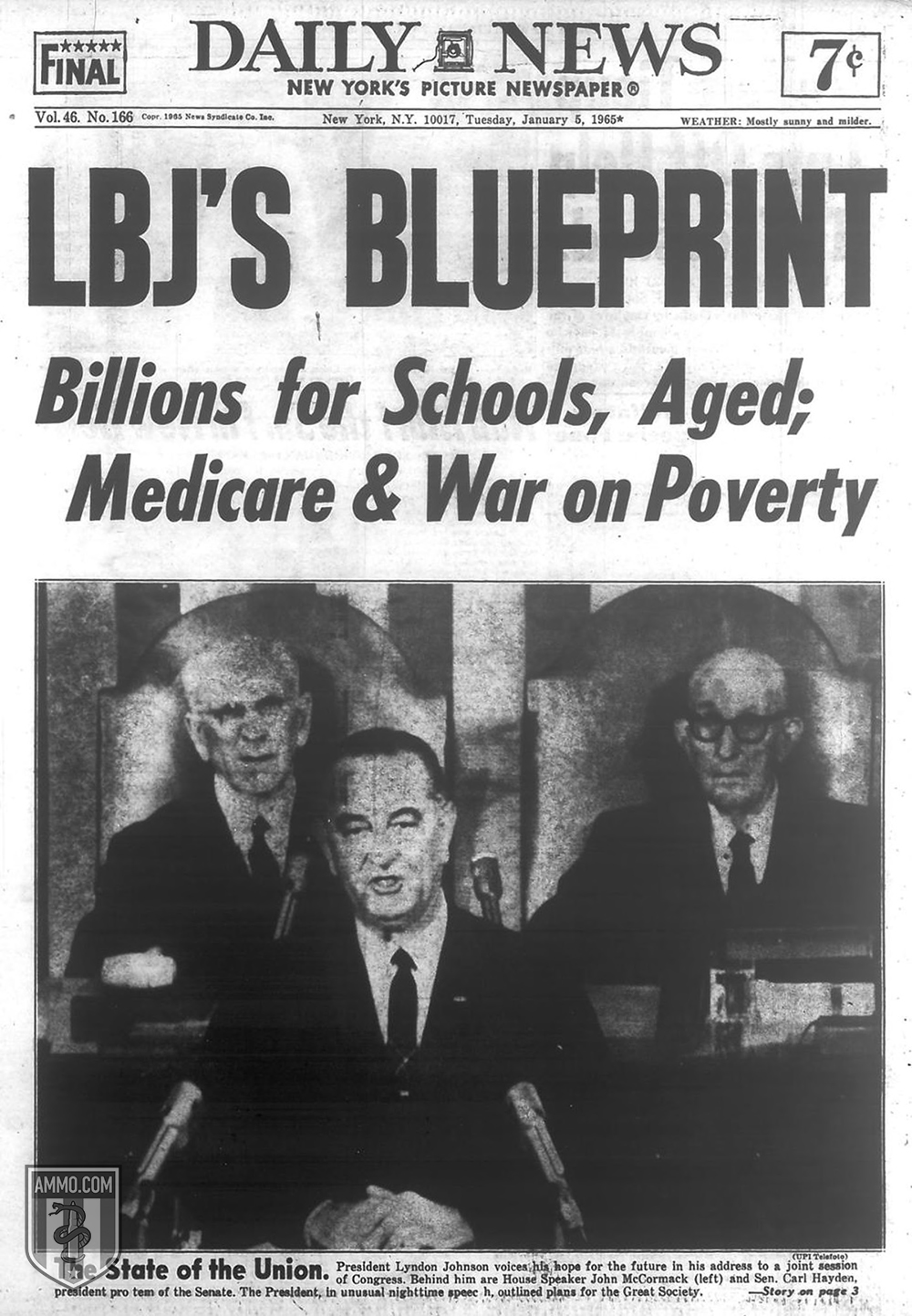 The thinking was basically this: The New Deal proved that government intervention could have some impact on poverty. As we stated above, there is some truth to this, albeit in a limited sense. The New Deal was able to lift incredibly poor people out of what were effectively Third World conditions in the United States. Because Johnson had at his disposal “the best and the brightest,” he believed that all he needed to do was apply their technocratic acumen to the problem of poverty and it would be solved.

One of the glaring and immediate differences between the New Deal (where it was successful) and the Great Society was the definition of poverty. Poverty, the kind the New Deal was effective at reducing, was largely an objective condition. For example, people without electricity or running water in their homes. For the Great Society programs, however, poverty was largely defined in subjective, albeit quantifiable, terms like educational attainment and income level.

Here’s the problem with defining poverty in those terms: We now live in a world where the overwhelming majority of people who wish to get one can obtain a college degree. All this has done is devalue the college degree and saddle people with both unmarketable skill sets and a high level of nondischargeable debt. A college degree simply doesn’t mean much anymore because anyone who wants one can have one.

Similarly, consider income in real terms – the ability to buy things. The poorest people in America now have access to more computing power in their pocket than NASA used to go to the moon. Cheap consumer goods are plentiful, even for people with very low incomes – part-time minimum wage jobs, for example.

Poverty, defined as “making much less than rich people” or even “struggling to get by” simply means one is at the bottom of the economic ladder. The bottom of the economic ladder will always exist as long as there is one. Grinding, Third-World-style poverty – in the vast overwhelming majority of cases – is a thing of the past. The United Nations puts the percentage of Americans with access to electricity at 100.

In the absence of significant poverty conditions to attack, the “War on Poverty” was largely about hitting a moving target subjectively defined as “having less than some other people.”

Despite the best intentions (to which, it should be noted, “the road to hell is paved with”), the Great Society was bound to fail simply because there were no clear targets. In this sense, the War on Poverty prefigured other government wars on abstract concepts, such as the War on Drugs and the War on Terror.

The failure, of course, is seen by big government advocates as a sign that not enough has been done. Since the War on Poverty began, $15 trillion has been spent, with negligible impact on lifting people out of poverty. For context, the Apollo program cost $25.4 billion, $146.1 billion in 2019 dollars. Put simply, for the cost of the War on Poverty, America could have funded almost seven Apollo programs.

Unlike the War on Poverty, the Apollo program was a resounding and verifiable success.