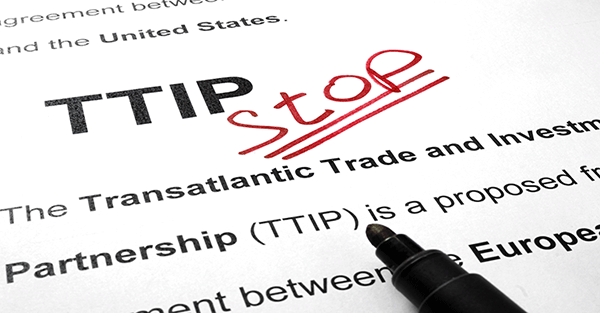 Leaked papers show ‘unsurprising’ TTIP disagreements: Dutch trade minister BusinessEurope May 2, 2016    The lack of agreement between the US and Europe on a controversial trade agreement is unsurprising, Dutch trade minister Lilian Ploumen said on Monday. The minister was commenting on the leak of confidential negotiating documents relating to the Transatlantic Trade and Investment Partnership which have been published by environmental group Greenpeace. – Dutch News

TTIP and its sister agreement TPP are not “business as usual,” as the Dutch trade minister implies (see above).

Born in secrecy, marinated in furtiveness, the trade treaties are obviously being developed for purposes other than “free trade.”

In fact, it is oxymoronic to speak of negotiated treaties of any sort as “free.”

Treaties that are negotiated over a long period of time often have adjectives like “free” attached to them. But this is only to try to make what is finalized more palatable.

In the modern era, such treaties typically advance globalism and concentrate more power in the hands of a few.

When it comes to TTIP, leaks of documents made available by Greenpeace Netherlands seem to show  TTIP could  have a negative impact on “public health, people’s rights, internet privacy and the environment.”

That’s according to RT, which posted an extensive article on TTIP several days ago.

The article is one of only a few by larger media outlets. Not surprisingly, Western media seems to have avoided writing about the leaked documents.

Here is more from RT:

The 248 pages of classified negotiation papers on The Transatlantic Trade and Investment Partnership (TTIP) were released by Greenpeace Netherlands on Monday.

“This treaty is threatening to have far-reaching implications for the environment and the lives of more than 800 million citizens in the EU and US,” a Greenpeace statement says.

The TTIP is “about a huge transfer of power from people to big business,” according to the group.

The RT article goes into some depth. For instance, Washington is pressuring the EU to make certain concessions. DC is alleged to be “blocking European car exports into the US “to force the EU to buy more environmentally risky US farm produce.”

Greenpeace has been worried that the negotiation papers do not mention General Exceptions rules, which would allow nations to regulate trade “to protect human, animal and plant life or health” or for “the conservation of exhaustible natural resources.”

“The omission of this regulation suggests both sides are creating a regime that places profit ahead of human, animal and plant life and health,” Greenpeace says.

The media outlet Sputnik makes other points regarding the leaked papers.

[They] show that the US was blocking an EU demand that arbitration panels to handle corporate lawsuits be public not private as sought by Washington.

The documents further reveal the fact that the US has blocked the urgent European call to replace the controversial private arbitration tribunals, responsible for corporative lawsuits, with a public State model.

We’ve suggested in previous articles that these treaties are even more significant than they are being portrayed.

They are not merely an elaboration of issues regarding exports and imports, they are actually the foundation of an entirely new kind of governance.

The Gutenberg press undermined the social structure of the day. Once Bibles had been printed in non-Latin formats, people could see for themselves that the Roman Catholic Church was misrepresenting the Word of God.

The Church lost credibility and then it lost power. So did titled nobility. Once the Church was seen as institutionally corrupt, the concept of the Divinity of Kings was brought into question.

Out of the wreckage emerged the “democracy” as an alternative way of organizing social structures. The elites of the day still controlled society but did so behind the scenes.

Now in the 21st century, we grapple with information revolution that has discredited democracy as an organizing force.

Within this context, one can argue that TTIP and TPP are a good deal more ambitious than they have been portrayed.

What seems to be emerging is a social structure built around multinational corporations and an expansive and powerful mercantilism. The structures created by TTIP and TPP are intended to replace current sociopolitical configurations just as democracy “replaced” monarchial rule.

This would explain the tremendous effort being expended on these treaties and the notable secrecy as well.

These treaties promote a kind of authoritarian corporatism. It is not a pleasant thought, but increasingly seems to be reality.

It could be that the agreements are considerably watered down. But the forces behind them will then begin the process of strengthening them over time.

Conclusion: Recognizing what is occurring, people should make every attempt to further enhance their privacy and independence. It is important to take action as we are living through a historical “crux” time. Decisions made now will have considerable personal and familial resonance.