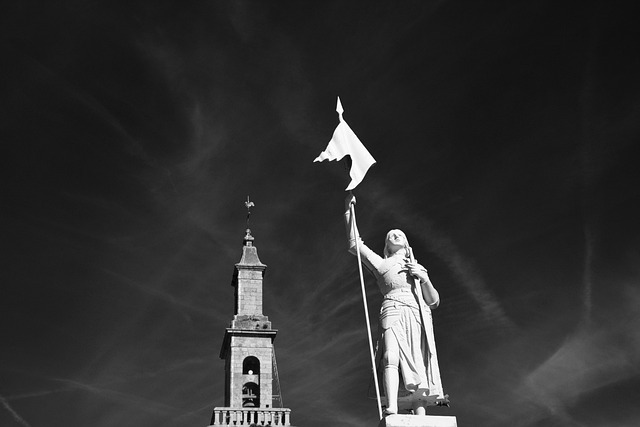 The Social Justice© left will not relent until it’s sacrificed every single sacred cow in Western civilization at the altar of Diversity©. In the end, of course, the movement will collapse and cannibalize itself – but not before it’s possibly inflicted fatal damage to the West.

If you’ve got a favorite book with a heteronormative main character that you like the way he/she is, best bury it now before some ambitious women-and-gender-studies-scholar-turned-playwright gets to it: 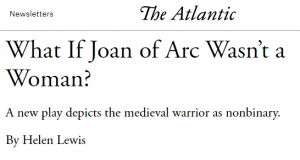 “Does it matter if Joan of Arc was not a woman? ‘Our new play I, Joan shows Joan as a legendary leader who uses the pronouns they/them,’ announced Shakespeare’s Globe theater in London.”

The activists who bathe in this brand of revisionist history alternate between a.) claiming creative license (dismissing criticism on the grounds that they are producing innovative fiction) and b.) insisting that their deranged fantasies are, in fact, objectively true.

Their position shifts depending on which argument best advances their interest at any given time.

For instance, LGBTQ+++© propaganda rag Pink News produced this little ditty – titled “Joan of Arc didn’t call herself non-binary but gendering her isn’t that straightforward” — to fashion fiction into reality:

“Art is interpretative. But so is history*… Joan is a particularly elusive and complicated historical figure. We cannot possibly access Joan’s understanding of her own gender, or how she related to the gender roles of her day. We can only look at the available source material and interpret how she expressed herself.”

(*This is the postmodern ethos; there is no such thing as historical fact; there is only interpretation. Ideological victory depends on more aggressively advancing your own interpretative narrative than your opponent’s.)

There is delicious irony in transgender ideologues turning Joan of Arc into a genderqueer eunuch. The LGBTQ+++© movement that third-wave feminists birthed now bites the hand that feeds, erasing the femininity of one of the most iconic women in history.

One could argue that all this is normal revisionism. But what if the shoe was on the other foot – for instance, a play that turned Rosa Parks into a Proud Boy? How would that go over with the Twitter blue checks, or the Washington Post editorial staff?

Of course, such a production would be reflexively castigated as cultural appropriation or erasure or whatever – the diseased gasping last breaths of the ubiquitous White Supremacy spectre that won’t die, which pervades everything all at once.

Racism and sexism and the other “isms” are the lenses through which these people see literally everything. Even while they shrug off their revisionism as mere art, they view the realm of pop culture not as a venue for creative exploration but as a battlefield.

Social Justice© ideologues are incapable of producing cultural artifacts with no agenda. Nuance is not their modus operandi. None of it is discreet or subtle. Every Hollywood production of the modern era slaps you in the face with its messaging.

Here are some pieces of artwork that the corporate media would never celebrate, or even allow to exist, under any circumstances: Mohammed Does Dubai: Arabian Nights in the Homosexual Underground or Ghandi Gets Alt-Right Curious: The Aryan Nation Years.

Everyone knows intuitively that those would get banned on Amazon and YouTube toot suite. Their creators would be excoriated and removed from PayPal. They don’t even require censorship to suppress because no one who doesn’t want to become a social pariah would ever produce them in the first place.

Non-Western cultural mythologies not only get a pass from the revisionist social engineers – they are awarded special legal protections. The Social Justice© left reserves its self-flagellating, self-loathing vitriol for the West out of deference to “diversity.” They’re also afraid to toy with non-Western cultures in the same manner because those don’t have the same tolerance for countercultural speech (which includes taking artistic liberties with sacrosanct historical icons).

Thus, via asymmetric warfare, the Social Justice© hive mind is permitted to run a cultural coup under the guise of creating avant-garde art.