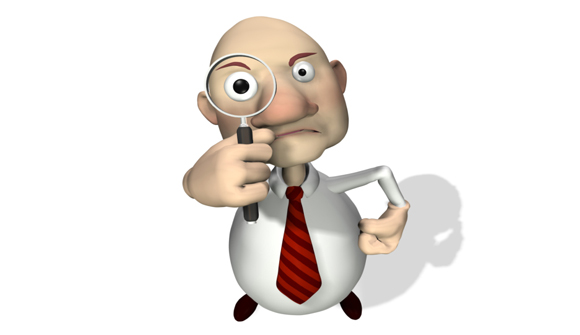 Go Ahead, Bash the Fed …"Bash" is a useful word for journalists looking to stack the deck. We criticize; the people we disagree with "bash." The bashing may take the form of criticism, but the choice of words has primed readers to regard the criticism as stupid and vulgar. – Bloomberg

Dominant Social Theme: The Fed needs to be criticized so it can work better.

Free-Market Analysis: This is another one of a series of articles in Bloomberg that seem to comprise a "limited-hangout" campaign supporting the Fed.

This one makes a feint toward supporting a rules-based Fed program but then seems to settle for a more generic potential solution: "Tighten … the statutory mandates on the Fed and require … evaluations of its performance."

This sort of solution can only be arrived at if Fed critics are facilitated and a frank discussion of the Fed's shortcomings is provided. The article makes the point at length that Fed "bashers" are mostly bashing from the standpoint of Fed supporters. One man's basher is another man's concerned critic. The article is supportive of criticism to make the Fed better and more responsive.

What's going on is important. The consistent generation of articles like this one shows how such a campaign is constructed by an important and influential media group.

The last article we analyzed was a lot like this one. It pointed out that criticism was good and necessary as it would provide the Fed with salutary insights. It would make the Fed work better, in other words.

This article, as you can tell, is along the same track. Various members of the Bloomberg editorial community seem to be creating these editorials on a regular basis. Every few days another such editorial shows up with another byline. It seems as if the editorials are spontaneous … and yet, perhaps not.

Bloomberg represents the interests of Wall Street and the banking community. The Fed is important to this community because it is a facility that prints money from nothing. If you have the right connections or the right political clout, the Fed will print money for you free of charge.

The Fed might provide you the currency as a short-term loan but in the modern day the Fed is famous for forgiving – or at least not collecting on – those loans. So it might as well be a gift.

Imagine the power wielded by such an establishment. The dollar is the world's reserve currency and those clustered around the Fed have access to dollars without charge, or with little charge. Of course, in other countries, certain individuals have the same sorts of privileges.

Central banking is thus a polarizing force and one that provides society with a natural hierarchy. Those closest to the money spigot and those who control the money spigot constitute the top-level elite. After that, one's metaphorical rank is determined by the intimacy that one can acquire with the top players.

In the 21st century, central banking's monopoly money privileges have come under furious attack, much as they did in the 1930s, the last time the US and the West were gripped by an intractable financial crisis.

At such times, it becomes evident and obvious that the system is basically a way of inflating assets and what is labeled as "normal" or a "recovery" is actually serial asset inflation.

Every part of the Fed's operation distorts the market and makes it impossible for the economy to function as it would if money were generated in the private sector rather than a public one.

As this hard truth sinks in, people begin to examine the "matrix" in which they live more closely. At this point a number of realizations occur and such individuals may well conclude that they would be better off without central banking and its "price-fixing" (for that is what it is) of the value and volume of money.

Of course, the Internet itself is integral to these insights – and it may well be that a larger percentage of people today understand the ruination of monopoly money production than did even in the 1930s.

This must surely be worrisome to those who have profited from the Fed's vast power and ability to print money from nothing. The mounting public pressure on the Fed has now led to several bills circulating on the Hill, including one famous bill to "audit" the Fed and another to strip it of decision-making power and create a rule that would impel the Fed to arrive at decisions more mechanically or even provide more decision-making power to Congress.

Both pieces of legislation are raising the alarm among Fed supporters but there is obviously confusion over what to do about them.

That the central bank generally works well is now conventional wisdom in much of the press corps. But the Fed doesn't deserve all the praise it gets. Three monetary economists recently looked at its historical record and reached more dour conclusions:

Early in its career, it presided over both the most severe inflation and the most severe (demand-induced) deflations in post-Civil War U.S. history. Since then, it has tended to err on the side of inflation, allowing the purchasing power of the U.S. dollar to deteriorate considerably. That deterioration has not been compensated for, to any substantial degree, by enhanced stability of real output. Although some early studies suggested otherwise, recent work suggests that there has been no substantial overall improvement in the volatility of real output since the end of World War II compared to before World War I.

Nor should its more recent record be lauded. … The Fed's monetary policy in 2008 kept credit much too tight. Even after Lehman Brothers collapsed in September 2008, the Fed refused to cut interest rates and expressed concern about the rate of inflation (which has stayed low ever since).

We can see here how such an editorial can go wrong. To begin with, the editorial has never addressed the fundamental point of the Fed, that it is a price-fixing facility. This allows the editorial to accept the basic wisdom that the Fed is a necessary institution that does good work but that can be improved.

The article then begins to explain ways that the Fed could have done better. As we can see above, in the article excerpt, the Fed is being criticized for being contractionary in 2008, though the previous paragraph has made the point – probably correctly – that the Fed has tended to "err on the side of inflation."

The thing to keep in mind here is that in the past 50 years or so, half of the Fed's existence, the bank has never really sustained a policy of tight money except for a short time during the early 1980s.

The article then provides us with the idea that "many possible rules would have performed better. If the Fed had targeted nominal gross domestic product, for example, monetary policy would have been more restrictive before the financial crisis and more expansionary from 2008 onward."

Strange, eh? The article's argument for a rules-based system is that it would have forced the Fed to be even more expansionary after 2008!

How would this have been a good thing? Central banks have poured some US$50 trillion in the larger economy in the past six years. Stock markets are going wild. High-end assets like apartments, boats and luxury cars are selling for the multi-millions, even tens of millions. Apple may soon be the first company to be capitalized at US$1 trillion.

All the Fed has done – along with other central banks presumably under the watchful eye of the Swiss BIS – is create another asset bubble.

The article begins by granting the Fed utility even though it is a monopoly money producer and thus inevitably distortive of the economy. It ends by making the argument that the Fed's main flaw is that it hasn't been printing enough money and that a rules-based system might have alleviated the Fed's reticence.

How grown men can make these arguments after the past century of Fed-related booms and busts is beyond us. But then again, what Bloomberg is providing here is a promotional campaign, one aimed at preserving the Fed – albeit with changes or upgrades.

This is presumably the best hope they have. The Fed cannot go on as it is, but if it is changed – not too much but enough – then the public will be satisfied and the franchise can continue.

The trouble with this perspective, as we have pointed out innumerable times, is that the Internet – driving much public dissatisfaction – is a process not an episode. The limited hangout strategy that worked so well in the 20th century is far less certain in the 21st.

That's because each hangout, once dissected on the 'Net, becomes fodder for yet more controversy. It is a closed loop in which each attempt at amelioration only expands the discussion.

This is a grave problem for modern-day controllers and it has only been faced previously with the advent of the Gutenberg Press, which basically blew up the Catholic Church and the idea of the Divinity of Kings.

The Gutenberg press convulsed the elite of its day for there will not simple answers to the spread of information and dawning realizations that peopled gained about their world. The Internet is a good deal more powerful than the press, and its impact has only begun to be felt.

It is questionable as to whether the elites of today can do any better with this information revolution than past elites did with theirs. The current Bloomberg promotion is logically flawed and its "limited hangout" strategy if generally adopted may only generate further controversy.

Real information revolutions can generate significant upheaval and can prove quite difficult to deal with, no matter the "hangout."