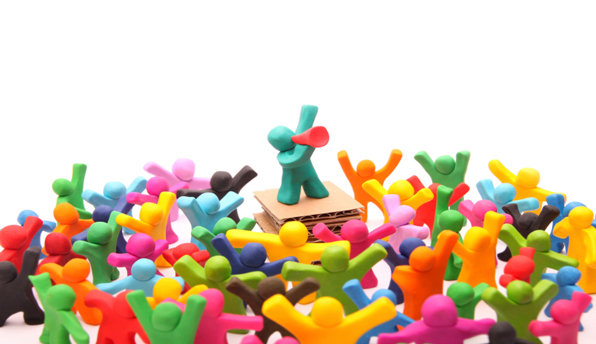 The intimacy of crowds … Crowds aren't really crazed – they are made of highly co-operative individuals driven to shared interests and goals … The 19th-century French criminologist Gabriel Tarde likened even the most civilised of crowds to 'a monstrous worm whose sensibility is diffuse and who still acts with disordered movements according to the dictates of its head'. … This is still the prevailing view of mob behaviour, but it turns out to be wrong. In recent years, social psychologists have found that, rather than surrendering rationality and self-awareness, people in crowds define themselves according to who they are with at the time; their social identity determines how they behave. – Aeon

Dominant Social Theme: The madness of crowds is one reason we need governments to protect us.

Free-Market Analysis: It is common knowledge we need modern regulatory justice because of an inherent tension between the rights of individuals to be left alone and the rights of others not to suffer from the acts of a few.

This is most famously summarized by a statement in Oliver Wendell Holmes, Jr.'s opinion regarding a Supreme Court case, Schenck v. United States, in 1919. The decision held that the defendant's speech voiced against the draft during World War I was not protected under the First Amendment of the United States Constitution.

Holmes wrote such activities as handing out flyers to protest against the draft during World War I were a violation of the Espionage Act of 1917, among other acts. He claimed that the government could forbid this because it was a "clear and present danger" to war efforts.

He wrote: "The most stringent protection of free speech would not protect a man falsely shouting fire in a theater and causing a panic. […] The question in every case is whether the words used are used in such circumstances and are of such a nature as to create a clear and present danger that they will bring about the substantive evils that Congress has a right to prevent."

But what if Holmes's assumption regarding "panics" and speech were – like so many modern court decisions – mostly designed to give Leviathan the ideological firepower it seeks?

Here's more from this fascinating article:

Stephen Reicher, a social psychologist at the University of St Andrews, says this model of crowd behaviour fits every case of public disorder in the past three decades where data have been collected. It also squares with the most thorough investigation of urban unrest ever conducted: the Kerner Commission report into the urban race riots in Los Angeles, Chicago, Newark, and other US cities between 1965 and 1967.

Perhaps the most serious of these took place in Detroit in July 1967 after police raided an unlicensed bar and hundreds of patrons and local residents gathered in the street to protest. After more than four days of violence between the crowd and law enforcement, there were 43 people dead, 1,189 people injured, and more than 2,000 buildings destroyed.

The Kerner report concluded that the key factor behind the unrest – the worst in US history since the Civil War – was widespread deprivation within black communities. It noted that black people were twice as likely as whites to be unemployed, and almost four times as likely to be living in poverty.

The report also pointed out that the typical rioter was better educated than the average person in their communities, more socially integrated and less likely to have a previous criminal record. 'What the rioters appeared to be seeking was fuller participation in the social order and the material benefits enjoyed by the majority of American citizens,' it concluded. 'Rather than rejecting the American system, they were anxious to obtain a place for themselves in it.'

This sits neatly with Reicher's theory, which holds that people in crowds behave not with mindlessness or madness, but by co-operating with those around them. They do not lose their heads but instead act with full rational intent. In London, many (though not all) of the rioters were motivated by a shared sense of grievance at how their communities had been treated by police in the preceding months and years, in particular the frequency with which young black men were being stopped and searched by police in the street for no good reason.

When the riot started, many individuals felt that, as members of a dissatisfied group, they had a legitimate cause to join in. Surprisingly, the model also explains why crowds in emergency situations are disinclined to panic, putting them at higher risk.

When the hijacked planes hit the World Trade Center towers in New York on 11 September 2001, most of those inside procrastinated rather than heading for the nearest exit. Even those who managed to escape waited an average of six minutes before moving to the stairs.

Some hung around for half an hour, awaiting more information, collecting things to take with them, going to the bathroom, finishing emails, or making phone calls. Likewise, say researchers, passengers have died in accidents because they just didn't try to get out.

… Contrary to popular belief that crowds always panic in emergencies, large groups mill around longer than small groups since it takes them more time to come up with a plan. The new understanding of crowd dynamics has helped authorities in Europe rewrite the rules on crowd management.

If crowd behaviour stems from the social norms of the majority rather than the actions of the criminal few, then sending in the riot squad is likely to make things worse, because it treats everyone as aggressors. Presumed aggressors will probably respond in kind, and violence can spiral out.

At the University of Sussex, researchers led by the social psychologist John Drury have coined the term 'collective resilience', an attitude of mutual helping and unity in the midst of danger, to describe how crowds under duress often behave.

There are many documented examples of this … In each case, most of Drury's interviewees recalled feeling a strong sense of togetherness during the crisis, and an inclination to help strangers. Without such co-operation, the casualty rates could have been far higher, says Drury, who refers to crowds as 'the fourth emergency service' – an attitude not often shared by police.

…. The idea that in crowds we might give the best versions of ourselves runs counter to the common view that has prevailed since the French Revolution. Yet it has science on its side: from the cohesion of football crowds to the altruism of disaster victims and the solidarity of revolutionaries, the evidence for the sanity and intimacy of crowds has become overwhelming.

Holmes's decision has often been held up as an extraordinarily wise one, but given this recent research, it might be seen as wrongheaded. The eminent justice was also, most likely, drawing on the Extraordinary Popular Delusions and the Madness of Crowds, a famous book that can be seen as laying the groundwork for Holmes's decision and other such approaches.

The book was written by Scottish journalist Charles Mackay and published in 1841. Mackay is most scornful of people who get together in groups and then, according to him, inevitably perform in a deluded fashion. Mackay uses numerous historical examples to illustrate the idiocy of people in groups, but his examples of crowd mania gone wrong include the Railway Mania of the 1840s and the South Sea Bubble.

In fact, it has been fairly well proven that most of the large-scale manias of previous history were created by government monopolies. In such cases, there WERE manias, as well there might be given that such monopolies can often be exceptionally lucrative events, at least in the short term.

Government has a habit of creating monopolies that can gather an extraordinary amount of assets in a short time. One might think this habit is not so evident in the 21st century but that is not true.

The Wall Street Party we've reported on is certainly one more such bubble in a history of bubbles. It is yet one more example of a profit-making opportunity that will eventually burst and leave a legacy of further evidence for those like Mackay who believe that people are prone to fallacious manias.

We will see if the kind of perspective enunciated in this Aeon article gradually makes its way into the mainstream. We doubt it will be much commented on in the short term because it damages yet another underpinning of the regnant state: If people are not apt to lose their minds in large groups, if mobs are neither inchoate nor unreasonable (but logical reactions to official authoritarianism) then much of modern government's civil and military law-enforcement stance certainly becomes more questionable.

Modern governments seek rationales to enforce "law and order." But if the madness of crowds is merely another dominant social theme, designed to provoke fear while supporting authoritarian solutions, then surely the research in this Aeon article provides ammunition to debunk it.

Is the real "madness" believing Leviathan is necessary in the first place?