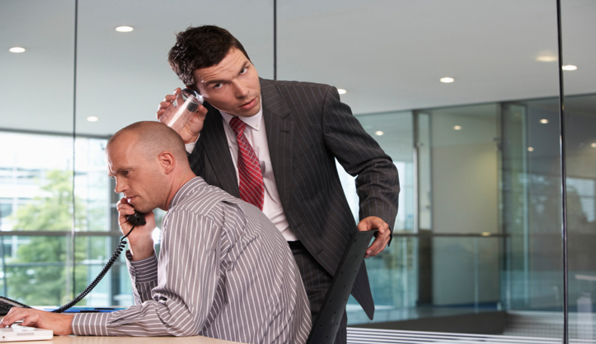 And minder makes three: For White House interviews, it's never just one-on-one … When NBC News White House reporter Chuck Todd conducts background interviews with government officials these days, he and his source usually aren't the only ones in the room or on the call. Typically, there's a third party: A representative of the White House's press staff monitors the conversation. Sometimes, the press monitor interjects to clarify a point the official makes. Other times, he or she remains silent. Each time, however, "it feels like having a third wheel on a date," Todd says. "It's like having a chaperon." He adds, "There's so much precaution now in the way people in power interact with the press." – Washington Post

Dominant Social Theme: Without minders, the mainstream media would get the inside scoop!

Free-Market Analysis: This article supports the meme that the mainstream media in the West is engaged in a meaningful news exercise. It is not, but pretending it is sustains the larger media fiction.

It is amazing how intricate journalism has gotten in the past century. Unfortunately, the more ethics, complexity and education available to the average journo, the less effective he or she seems to be.

The professionalization of the news media has changed it for the worse. We base this on the degenerating coverage of significant events now taking place in the West and especially in the US.

To a good degree, the craft of journalism – such as it is – emerged as political commentary. This was especially true in the US. Then, as now, those covering current events were concerned with eroding or expanding personal and community freedoms. The difference is that in the current era, what can be written about and commented on seems to be shrinking. The emergence of minders is merely part of a larger trend.

The press-minder phenomenon isn't limited to the White House. Reporters who cover other parts of official Washington, such as Capitol Hill, can usually count on encountering an official escort, turning a one-on-one interview into a one-on-two. The same thing happens irregularly to journalists who interview sports, entertainment and business figures. But the White House – perhaps the single most intensely covered institution in the United States – may be the most diligent user of the chaperoned interview.

… Even lesser officials are subject to the policy; one reporter says a press attendant sat in when she interviewed Sam Kass, the chef who advises first lady Michelle Obama on her "Let's Move!" health and nutrition program. This week, White House press secretary Josh Earnest complained that The Washington Post had relied too heavily on anonymous sources in a story about how officials had ignored warnings of a budding immigration crisis.

Implicit in Earnest's comment: If every interview was attended by a White House press monitor, there would be no anonymous sources. Journalists tend to view minders with suspicion, if not outright alarm. A third party can alter any interaction in unforeseen ways.

One White House reporter notes with irritation that minders have sometimes cut off contentious questioning or otherwise interrupted the flow of conversation. More broadly, journalists see it as part of a larger official effort to shape their coverage, similar to demands to approve quotes before they're published or to keep even the most mundane information off the record.

"If you have a minder there, it sits in [a source's] brain that they're supposed to stay on message," said Peter Baker, who covers the White House for the New York Times. "They're less likely to share something other than the talking points." Having minders around, Baker says, "is obviously intended to control the message. Let's put it this way: It's not intended to increase candor."

Veteran reporters such as Baker recall a time when the middlemen stayed out of the picture. During the Clinton administration, Baker says, he would call Gene Sperling, then a young economic adviser, and chat freely with him. But as director of the National Economic Council under President Obama, Sperling referred Baker's calls to the press office, following protocols discouraging unauthorized contacts with the news media.

"He [was] operating within the system," Baker says. "He doesn't want to violate it." Baker acknowledges that there isn't much journalists can do about it. With dozens of reporters clamoring for interviews each day, the White House can dictate its terms of engagement. And often the terms include a minder. One reporter says she beats the minder system by calling officials at home or on their cellphones on weekends.

This is the crux of the matter. Why is the media "clamoring:" for interviews with senior White House officials? What on Earth are these individuals going to say that sheds light on the underlying reality of a given issue?

It's not quite clear when this kind of reporting got enshrined. Probably it began after the Civil War and then came into its own in the 20th century. U.S. Congressman Oscar Callaway reportedly had this placed into the Congressional Record in 1917:

"In March, 1915, the J.P. Morgan interests, the steel, shipbuilding, and powder interest, and their subsidiary organizations, got together 12 men high up in the newspaper world and employed them to select the most influential newspapers in the United States and sufficient number of them to control generally the policy of the daily press….They found it was only necessary to purchase the control of 25 of the greatest papers.

"An agreement was reached; the policy of the papers was bought, to be paid for by the month; an editor was furnished for each paper to properly supervise and edit information regarding the questions of preparedness, militarism, financial policies, and other things of national and international nature considered vital to the interests of the purchasers."

It would seem then that organized control of the news came to the US early in the 20th century. Today the most mindless kind of coverage involves questioning important politicians and corporate business people about socio-economic or military policy.

The responses usually add nothing enlightening, nor are they supposed to. It is like kabuki theatre where ritual substitutes for content.

And yet … gathering news is not actually a difficult activity. If one is assigned a "beat," all one need do is spend some weeks investigating who is apt to speak on background and cultivate him or her. The source must be credible and motivated and the best sources are the ones that "prove out" over time. Often, one or two highly placed sources are all that's needed.

In the past few decades, a movement to discredit anonymous sources has taken root in the mainstream news media. Not content with controlling content from on high, those who run the biggest media conglomerates and have considerable influence over journalism schools have made anonymous source reporting vaguely disreputable.

In fact, anonymous source reporting is usually the only way a good reporter is going to get an original story. Very few people are going to go on the record with anything approaching sensitive or secret information.

This minder phenomenon is surely reinforcing everything that is wrong with modern journalism. Not only is the reporter seeking "new" information from an official tasked with avoiding it, now the designated interviewee has another set of eyes and ears monitoring what's being said to ensure that any accidentally meaningful statement is quickly disavowed.

This article also provides us with the sense that reporters – free of minders – would be able to return to the business of generating news scoops. But this is simply not so. Almost nothing of substance is derived from "official" interviews.

This "minder" issue is a red herring. What is needed is the aggressive pursuit and recruitment of highly-placed anonymous sources within any hierarchy – private or public.