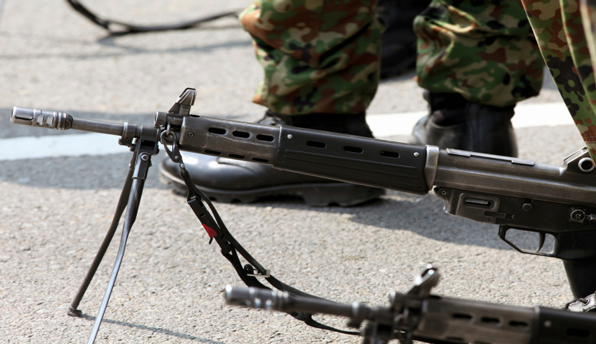 In Australia, Shinzo Abe Astutely Handles History … Abe showed that he understands how the past must be handled in order to further important strategic goals. Like the NATO leaders at Normandy, Abe followed the playbook for reconciliation." Japan's premier Shinzo Abe has a reputation for policies and gestures that are offensive to World War II victims, but his recent speech to the Australian parliament was anything but. – The National Interest

Dominant Social Theme: In the 21st century, countries like Japan must rearm. Military tensions demand it.

But there seems to be another side to Abe. Apparently, he can be politically astute and considerate when he wishes to be. At least that's what we read in The National Interest, which posted an article (see excerpt above) about his visit to Australia.

With his sensitive and gracious handling of the two countries' troubled past, he showed a promising awareness of how history must be handled in service of his diplomatic agenda in East Asia. A government's remembrance of the past is strongly driven by its political agenda in the present. Countries with clashing political goals mobilize their people, economies, and soldiers using divisive memories of past violence.

… When editorial pages and op-ed writers discuss Japanese leader Shinzo Abe's handling of history, they generally emphasize his divisiveness. Indeed, Abe has on many occasions outraged Japan's wartime victims with the ways that he has dealt with the past. His visit to Yasukuni shrine—a shrine to Japan's war dead that is associated with Japanese emperor-worship, imperialism, and war crimes—alienated and offended neighbors and the United States.

Gaffes and insensitive statements about Japan's past by some of Abe's appointees further create suspicions that he would prefer to obscure the darker events of Japan's twentieth-century history. In particular, Abe is widely criticized for his handling of the memory of the sexual slaves of the Imperial Army.

… In his recent speech in Australia, however, Abe showed that he understands how the past must be handled in order to further important strategic goals. Like the NATO leaders at Normandy, Abe followed the playbook for reconciliation.

What is one to make of this? Here's an update from a Reuters article posted at the beginning of July, entitled, "Japan Ends 60 Years of Pacifism."

Japan took a historic step away from its post-war pacifism on Tuesday by ending a ban that has kept the military from fighting abroad since 1945, a victory for Prime Minister Shinzo Abe but a move that has riled China and worries many Japanese voters

The change, the most dramatic shift in policy since Japan set up its post-war armed forces 60 years ago, will widen Japan's military options by ending the ban on exercising "collective self-defence", or aiding a friendly country under attack.

… The new policy has angered an increasingly assertive China, whose ties with Japan have frayed due to a maritime row, mistrust and the legacy of Japan's past military aggression. "China opposes the Japanese fabricating the China threat to promote its domestic political agenda," Chinese Foreign Ministry spokesman Hong Lei told a news conference in Beijing.

"We demand that Japan respect the reasonable security concerns of its Asian neighbors and prudently handle the relevant matter." South Korea, like Japan allied with the United States, but still aggrieved about Tokyo's 20th century colonisation of the Korean peninsula, said it would not accept any change in policy affecting its security unless it gave its agreement.

Notice, Chinese officials accuse Abe of "fabricating" a China threat. As a result, Abe is again calling for a dialogue with China, as we learn in this article from BusinessSpectator:

Abe calls for talks with China … China Japanese Prime Minister Shinzo Abe has called for talks with Chinese President Xi Jinping during the APEC meeting in Beijing in November, the latest call from Tokyo for a face-to-face meeting amid testy diplomatic relations.

Abe pointed to the neighbours' huge trading and business ties, saying they were "inextricably" linked, despite a row over islands in the East China Sea and historical grievances largely tied to Tokyo's militarism in the first half of the 20th century.

"I want to hold summit talks (with Xi) during the APEC meeting in Beijing," he said, referring to the Asia-Pacific Economic Co-operation economic forum later this year. "My door is always open for dialogue and I hope the Chinese side adopts the same stance," Abe added.

Of course, that doesn't really seem to be the case, given that Abe has not met with his Chinese counterpart for 18 months – or ever since the two men took power.

Has Abe been inflaming tensions on purpose, just as the Chinese have accused him of doing? Perhaps Abe's real goal as regards his military posturing involved ratcheting up military tensions and using those tensions to pry Japan loose from its aversion to a more aggressive military stance.

Is Abe Washington's man in Tokyo? Abe has applied a classical Keynesian stimulus package to Japan – of the kind that has been proven not to work in the past. And now Abe has picked a fight with the Chinese in order to justify rearmament.

You know, we are not surprised by Japan's sudden militarism. We're fairly sure that it's part of a larger, globalist meme. The 21st century is to be the epoch of an ever-expanding "war on terror" and Japan is not to be left out.

Abe's job, apparently, is to ensure it.