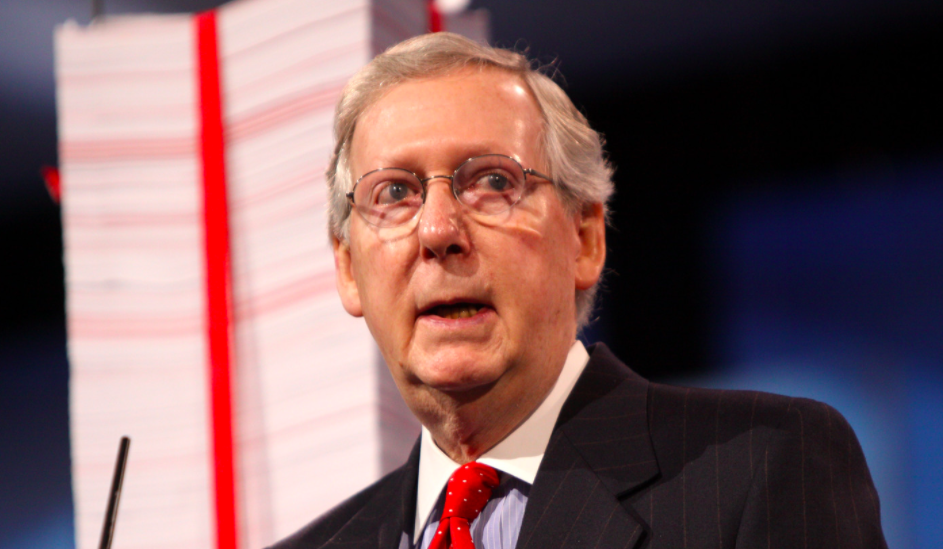 Mitch McConnell is the swampiest swamp creature that ever dragged his carcass through the bowels of DC.

Aside from being wholly, irredeemably, jaw-droppingly corrupt, McConnell is also the furthest thing from a conservative to wade through the Washington muck. Several national-level democrats, by any sane metric, in fact, are markedly more conservative than McConnell.

The pseudo-conservative, experimental human-turtle hybrid Mitch McConnell posing with a flag to convince voters that he is not what he actually is — a tool of multinational corporate hegemony.

How could a thoroughly un-conservative “conservative” ascend to the top of the GOP pyramid? Because the most successful politicians lie professionally, and because the GOP’s machinations are by no means guided by ideology.

The GOP’s ideological sprinklings — purely cosmetic and substance-free — are tossed to the base as red meat every election cycle. Once Republican lawmakers have duped enough of the electorate into actually believing their lying campaign ads, it’s back to DC and business as usual.

Far from its pretense as the paragon of “free market capitalism,” the GOP is the party of the oligarchs; not the party of business (whatever that means).

When a congressman like McConnell mentions that he is “pro-business,” what he means is that he is a willing corporate tool for further consolidation of economic power into the hands of a tiny elite. He does not mean that he supports your neighbor’s landscaping business.

When a congressman like McConnell says he is for fiscal responsibility, he means that he supports cutting the few “social safety net” programs theoretically intended to support the workingman – i.e., Medicaid, Medicare, and social security. What he does not mean by “small government” is eliminating obscene, multi-billion-dollar subsidies to corporations that are already the most profitable on the planet. He firmly supports those.

Exxon Mobil, corporate welfare queen extraordinaire, receives as much as $1 billion in government giveaways each year.

Is it a coincidence that, in the 2016 election cycle, congressional GOP candidates received in excess of $1 million in direct campaign donations and went on to greenlight further billions in subsidies to that very corporation? That figure does not even factor in dark money – a far more sinister and lucrative avenue of cash generation for green-eyed politicians.

501(c)4 organizations – ultra-shady tax-exempt “nonprofit” rackets granted a special carve-out by the IRS – are a favorite tool of McConnell and his underlings. While the IRS ludicrously categorizes these groups as “social welfare organizations,” they actually function as a pipeline to funnel campaign cash into politicians’ pockets out of the prying eyes of the public.

Imagine the average minimum wage-slave working at Arby’s. A customer walks in, promises to slip the wage-slave a fiver in exchange for a ten-dollar Arby’s meal. The wage-slave agrees, pockets the cash, the customer takes his food and departs. Everybody wins except the company – this one was “on the house.”

Now imagine that the wage-slave’s boss demands to know what happened to the company’s property (the food) that slipped away in the customer’s bag. The wage-slave refuses, citing privacy concerns.

What would happen in that scenario? The wage-slave would obviously be fired and likely prosecuted to the fullest extent of the law for the petty crime that netted him $5.

Laws, however, as evidenced day after day in media reports, are for the peasantry. The depraved managers of American Empire like Mitch McConnell are above the law.

Although the Arby’s analogy is slightly imperfect, such is the essence of the dynamic at play in Washington D.C. – it’s all a shell game that involves playing hide-the-ball with “‘public” resources for private gain.

What is “small government” about the bloated American Empire military budget that exceeds the next ten biggest-spending countries combined? Pledged principles, it turns out, don’t hold a candle to the allure of lucrative campaign donations from war profiteers like Lockheed Martin and Boeing.

McConnell serves as a reminder of just how far the GOP has fallen from grace. Gone are the days of Teddy Roosevelt; there is not a modicum of moral courage in the entirety of the party’s national leadership.

As the ranking member of the party theoretically in control of the most powerful chamber of the most powerful branch of federal government, McConnell could exert enormous influence to plug the holes in the sinking American economic ship; he won’t lift a finger to help the average American, though, because that would entail standing up to his corporate overlords.

In civics classes, propagandized schoolchildren learn that American “democracy” functions by gathering the top elected minds to go to work together in good faith on behalf of the People. In this fantasyland conceptualization of American governance, legislators carefully weigh the considerations of their constituents to arrive at the ideal solutions that benefit the maximum possible numbers of citizens.

Such patriotic ideations are pure, utter nonsense. The US empirically functions as an oligarchy; this is not a matter of dispute to serious-minded, honest academics.

Mitch McConnell is a pure, unadulterated product of the Swamp. He epitomizes decadent Washington culture through and through – no North Star, no spine, no empathy, and no remorse.

National leaders are handpicked to perform their roles as managers of American Empire precisely because they are sociopaths. The primary job requirement, far from being about personal excellence or exceptional moral character, is the capacity to take orders from power with a grin and carry out assigned tasks as dutiful technocrats and stenographers to power.

McConnell is up for re-election to the Senate in 2020 – the chance that comes once every six years to put the old corporate warhorse out to pasture. Granted, his DNC rival Amy McGrath is imminently corrupt herself (climbing to the top of the pyramid without compromising personal integrity is nearly impossible). She is by no means conservative, but beating McConnell as his own corruption game is a tall order indeed. If ever there was one, this is a legitimate “lesser-than-two-evils” scenario – even for dyed-in-the-wool conservatives.