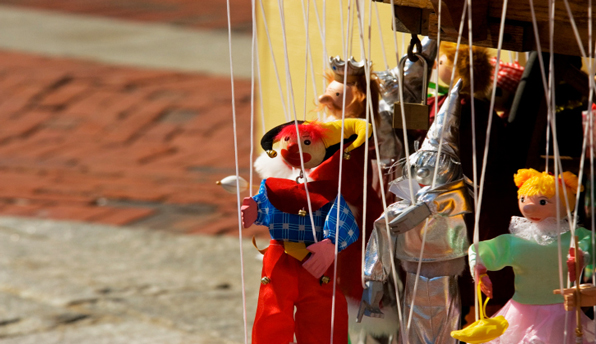 US financial showdown with Russia is more dangerous than it looks, for both sides … The United States has constructed a financial neutron bomb. For the past 12 years an elite cell at the US Treasury has been sharpening the tools of economic warfare, designing ways to bring almost any country to its knees without firing a shot. The strategy relies on hegemonic control over the global banking system, buttressed by a network of allies and the reluctant acquiescence of neutral states. Let us call this the Manhattan Project of the early 21st century. – UK Telegraph

Dominant Social Theme: How fortunate that the US can place sanctions anywhere in the world. What foresight.

Free-Market Analysis: Gradually and continually (we humbly observe) our theses are confirmed by others. The Anglo-American axis indeed controls the world – China, too.

We find this startling admission in a recent article posted at the UK Telegraph.

And, yes, we've reported on it in our own way, proposing that the top elites in any society have more in common with each other than the vast majority of citizens they keep (a distant) company with.

Thus it is not surprising that the US has a great deal of clout around the world. The article also makes the point that the power the US has accumulated makes its exercise dangerous, at least when it comes to Russia.

The Bear is a big and powerful country on its own, and any misjudgment on the part of US officials may cause a kind of destabilization that could lead to direct military conflict between Russia and the US.

Nonetheless, leaving aside the obvious danger, the article's point about the power that the West – and the US – has accumulated is significant.

"It is a new kind of war, like a creeping financial insurgency, intended to constrict our enemies' financial lifeblood, unprecedented in its reach and effectiveness," says Juan Zarate, the Treasury and White House official who helped spearhead policy after 9/11.

"The new geo-economic game may be more efficient and subtle than past geopolitical competitions, but it is no less ruthless and destructive," he writes in his book Treasury's War: the Unleashing of a New Era of Financial Warfare.

Bear this in mind as Washington tightens the noose on Vladimir Putin's Russia, slowly shutting off market access for Russian banks, companies and state bodies with $714bn of dollar debt (Sberbank data).

… The stealth weapon is a "scarlet letter", devised under Section 311 of the US Patriot Act. Once a bank is tainted in this way – accused of money-laundering or underwriting terrorist activities, a suitably loose offence – it becomes radioactive, caught in the "boa constrictor's lethal embrace", as Mr Zarate puts it.

This can be a death sentence even if the lender has no operations in the US. European banks do not dare to defy US regulators. They sever all dealings with the victim. So do the Chinese, as became clear in 2005 when the US hit Banco Delta Asia (BDA) in Macao for serving as a conduit for North Korean commercial piracy.

Mr Zarate told me that the US can "go it alone" with sanctions if necessary. It therefore hardly matters whether or not the EU drags its feet over Ukraine, opting for the lowest common denominator to keep Bulgaria, Cyprus, Hungary and Luxembourg on board. Washington has the power to dictate the pace for them.

This last point is especially noteworthy: Not only is the US effective at placing sanctions on countries around the world, it can also push most countries into complying with these sanctions. If US officials are unhappy, they can threaten credibly to destabilize a country causing such unhappiness.

Of course, it is not just the "US." Those who stand behind the enormous power of America are globalist bankers located in various independent city-states around the world.

Those wielding sanctions are a power elite that has created a complex tapestry of rules, regulations and relationships that are subordinate to Western interests.

The British Empire dominated in the world in the 1800s, and this domination included China, India and Brazil. The British also had a sizeable influence in Russia during the post-war Russian Revolution, along with Wall Street, as G. Edward Griffin has pointed out in The Creature from Jekyll Island.

Of course, there are those who continue to insist that these observations are crazy conspiracy theories. But as the Internet continues to inform people about the Way the World Really Works, it becomes more and more apparent that a tiny power elite does have considerable – even overwhelming – clout.

This state of affairs will surely not last forever. But one ought to keep it in mind when analyzing various moves that seem to sideline the dollar or otherwise damage Western influences.

The waning of Western influence may be a good deal less significant than advertised. This is important to keep in mind when trying to figure out globalist trends and how they are likely to evolve.

Check and recheck your premises. Here at High Alert we certainly do so. In many cases when it comes to investments, one of the most significant drivers of success may be whether the Anglo-American elite has decided to back an individual opportunity.

When High Alert decided to participate in a marijuana venture, one of the positive factors was the obvious evolution of marijuana legalization into a kind of elite dominant social theme. In Chicago they say, "The trend is your friend." If one can discern elite sympathies when it comes to certain opportunities, then that becomes part of investment calculus.

While what we call the Internet Reformation may eventually diminish the power and breadth of elite influences, they are currently most significant. One disregards them – certainly from an investment standpoint – at one's peril.