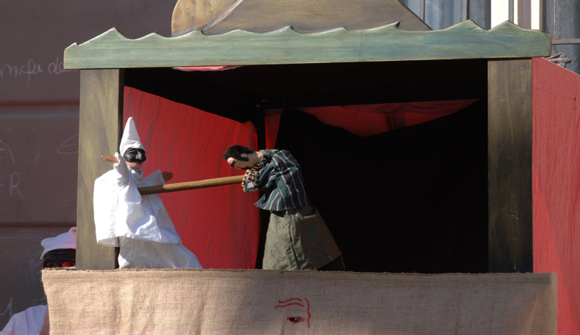 'Plunge protection' behind market's sudden recovery … Mysterious forces were trying their best, but they couldn't keep the stock market from swooning Wednesday. They failed in the morning, despite massive purchases of stock index futures contracts. Within minutes of the market's opening, the Dow Jones industrial average was down 350 points. Later in the day – after a lot of shocking ebb and flow – the Dow bottomed out with a decline of 460 points. It was only in the last hour of trading that the market saviors managed to trim the Dow loss to just 173 points. And they succeeded only after Janet Yellen's private, upbeat remarks about the economy were leaked. Welcome to a new kind of stock market – one that the average investor should refuse to be invested in. – New York Post, John Crudele

Free-Market Analysis: Veteran financial reporter John Crudele has blown up the myth of the market-driven stock exchange with this astonishing article in the New York Post.

We were attracted to it not only because it tells the truth, in our view, but because we have been making the same points regularly for years. The market is managed. Its managers want it to rise. Central banks and governments are now buying markets directly.

The modern market is not in any sense reflective of the larger economy. And Crudele has let loose with both barrels in the New York Post, a loadstar of mainstream media.

This is, of course, an important meme Crudele is debunking because it carries with it the suggestion that the average Joe can grow rich by applying perseverance and common sense to the art of "investing."

This is also an encumbered meme trailing behind it numerous subdominant social themes such as "value investing," "long-term investing," etc. The idea always is to paint the market as rational in the sense that it values successful companies over unsuccessful ones and offers you the opportunity of potentially picking those companies in advance.

Just for the record, I've been telling you for years that the stock market was in a bubble and that you should enjoy it while it lasts because bubbles always pop.

Of course, if you could time the end of the bubble, you'd be doing quite well. Miss the end and you are back to where you started. Or worse off in terms of confidence and finances. Welcome to a new kind of stock market — one that the average investor should refuse to be invested in.

… Let me explain about the unknown forces in the market these days. Call it by a nickname — the Plunge Protection Team. Or call it the President's Working Group on Financial Markets, the official name given to the group when it was formed by President Ronald Reagan after the market turbulence of 1989.

These forces may be working from a script in the "Doomsday Book," which the US government recently fought to keep secret when it was brought up last week during the AIG trial in Washington.

Here's the bottom line: Someone tried to rescue the market last Wednesday. And it's becoming a regular occurrence.

The details of last Wednesday morning are these: At the same time the Dow was off 350 points, the S&P index was down 43.80 points, That was an enormous decline in just 11 minutes of trading and it was an indication that Wall Street was not having a good day.

Then, someone (or something) started buying S&P futures contracts en masse. Twenty-one minutes later, the S&P index had regained 30 of those lost points and was back at 1,861.

Maybe you'll believe that there was some manipulation going on if you knew that a guy named Robert Heller, who was a member of the Federal Reserve's Board of Governors until 1989, proposed just such a rigging as soon as he left the Fed. Look it up. Oct. 27, 1989, Wall Street Journal. Headline: "Have Fed Support Stock Market, Too." By Robert Heller, who had just left the Fed to head up the credit card company Visa.

"It would be inappropriate for the government or the central bank to buy or sell IBM or General Motors shares," Heller wrote. "Instead, the Fed could buy the broad market composites in the futures market."

In case you don't know the lingo, Heller is proposing that the Fed or government purchase stock futures contracts that track — and can influence — the major indices.

These contracts are cheap and a government could turn the whole stock market around quickly — but probably not permanently. Wow! Doesn't that seem a lot like what happened Wednesday at 9:41 a.m., when S&P futures contracts were suddenly and mysteriously scooped up?

The above has been presented at length because it is a clear and simple primer about how government manipulations are implemented. What is more difficult to understand than the manipulations themselves is the lack of outrage shown by the general public.

The stock market is not just a barometer of wealth but also a mechanism for gaining and losing tremendous amounts of money. Every time official forces manipulate the market they cost investors funds that they shouldn't be losing; then they bestow wealth on others who would not receive it absent the manipulation.

This is the reason, at root, that we´ve continued to discuss the Wall Street Party. Our perception was that stocks were more highly manipulated than ever and that the bias was all to the up side … which made the market potentially promising for those who understood the manipulation.

We've also predicted that if the markets make it through this most dangerous trading season, the bubble will be primed to expand next year as well.

The article concludes with a quote from Robert Heller who says: "The Fed's stock-market role ought not to be very ambitious. It should seek only to maintain the functioning of the markets — not to prop the Dow Jones or the New York Stock Exchange averages at a particular level."

But as Crudele notes, "times change."

And that's obviously what's going on. What's even more disturbing is that if market averages are continually boosted through the new year and beyond, the eventual crash is going to be a ruinous one indeed.

We've suggested that this may be part of this manipulation … as the same players involved with the current market priming seek a more fully global marketplace. A serious market event might make it easier to push through further economic and monetary internationalism.

This may sound far-fetched, but who would have thought even several decades ago, that markets would be so obviously manipulated and that officials would not be bashful about admitting to it?

How one acts as an investor – keeping in mind what we've learned – is a personal decision, obviously. But this is certainly "a brave, new world."