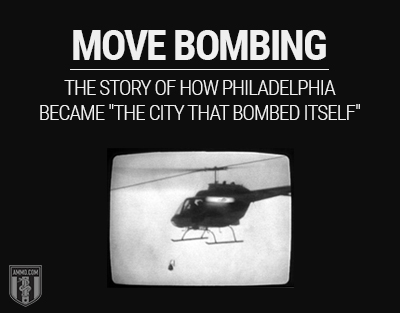 STAFF NEWS & ANALYSIS
MOVE Bombing: The Story of How Philadelphia Became “The City That Bombed Itself”
By Sam Jacobs - August 07, 2020

If we told you that the Philadelphia Police Department literally dropped a bomb on a house in the city in the 1980s, you’d probably think that we had lost our minds. But, in fact, this happened on May 13, 1985, at the MOVE townhouse at 6221 Osage Avenue. The whole event was captured on camera and can easily be watched on YouTube for anyone who doubts that this happened.

The case of MOVE is an unusual one, because they cannot simply be shoe-horned into the usual “they were just minding their own business and then the cops came in with overwhelming force” narrative that more or less applies at Ruby Ridge or at Waco. This is not to imply that the actions taken by the Philadelphia Police Department were appropriate – there were children inside the MOVE townhouse. However, it is important to note that MOVE had a history of violence.

If nothing else, the bombing of the MOVE house in Philadelphia is an excellent example of a complicated situation with no easy answer. This is precisely what makes it worth close examination by those interested in government overreach and Second Amendment rights.

First, we should point out that MOVE is not an acronym. It doesn’t stand for anything. Founder John Africa (born Vincent Leaphart) stated that it was simply a statement of intent for the organization. “Everything that’s alive moves. If it didn’t, it would be stagnant, dead.” A standard greeting for members of the group was “On the MOVE.”

Founded in 1972, the original name of the group was Christian Movement for Life. John Africa was a functional illiterate and transmitted his beliefs to University of Pennsylvania social worker Donald Glassey. Known as “The Guidelines,” these became the basis of communal living, which would later guide the group that would become MOVE. Glassey was later arrested on weapons charges and snitched on the group.

Africa was a Philadelphia native whose mother died when she was in her 40s, something that he blamed on the hospital where she died. He dropped out of school at 16, and was later drafted into military service during the Korean War.

While MOVE is generally thought of as a black nationalist group, this is, strictly speaking, not true. The organization had white members from the start. Its politics included a racial analysis that might be termed “black liberation,” however, it was much more focused on “green” issues than racial ones. They advocated returning to paleolithic hunter-gatherer societies and stood in opposition to science, medicine and virtually all forms of post-paleolithic technology. They believed that “justice” meant “just for all living creatures” and held radical pro-life and vegan stances. All members changed their surnames to “Africa” to indicate that they considered Africa to be the wellspring of all life on earth.

The group quickly became known throughout Philadelphia for their bullhorn-driven, profanity-laden protests against everything from puppy mills and zoos to police brutality and industrial pollution. These actions, of course, caught the attention of Philly’s finest, especially when it was under the rule of Frank Rizzo, the long-time mayor of the city who was a former police commissioner with little tolerance for activist groups.

In the introduction, we mentioned that the case of MOVE is complicated because they were not simply a group of strange people with strange beliefs leading a strange lifestyle. The first significant example of this is the 1978 MOVE shootout.

As often happens when unusual people begin living communally, the neighbors were not a fan of the MOVE townhouse. A series of complaints were made to the Philly PD about the original MOVE house at 311 N 33rd Street. This led to the police department obtaining a court order requiring the inhabitants to vacate the premises. MOVE members agreed to both vacate the building and surrender their weapons to the police if their demand to release MOVE prisoners held in city jails was met. The city fulfilled their end of the deal, but MOVE refused to relinquish their weapons.

The police waited almost a full year before making any kind of move to clear the building, but eventually did as members defied the court order. Police entered the house and were met with gunfire. Officer James J. Ramp was shot in the back of the neck and killed. MOVE claimed that he was killed by friendly fire, a statement corroborated by some of the witnesses, including a journalist. Sims Africa and eight other MOVE members were charged with Officer Ramp’s murder. A cache of weapons was retrieved from the house. The District Attorney charged three officers in the beating of Delbert Africa.

The full standoff lasted an hour, with MOVE members eventually surrendering to the police.

Convicted police murderer Mumia Abu-Jamal was a supporter of MOVE and reported on their trial, but it is unclear if he ever became a member.

The gunfight between the Philadelphia Police Department and MOVE can largely be seen as a prelude to the bombing of the MOVE house in 1985.

The Bombing of the MOVE House

MOVE relocated to their new house at 6221 Osage Avenue in Cobbs Creek, West Philadelphia, in 1981. They almost immediately began bothering their neighbors with trash, confrontations and often obscene bullhorn announcements. It was common for MOVE to respond to complaints from neighbors by taking a loudspeaker and taunting them. Indeed, city officials were surprised when they learned, at a community meeting, that most of the complaints were coming from black residents of the neighborhood rather than whites.

In 1985, the city obtained warrants for four members of MOVE for the following charges: parole violations, contempt of court, illegal possession of firearms and making terrorist threats. Residents were evacuated from their homes for a 24-hour period in advance of the police serving the warrants on the house.

The Philadelphia Police Department did not use half measures to serve the warrants against MOVE. They sent almost 500 police officers to the house. City Manager Leo Brooks arrived as part of the detachment. Water and power to the house were cut. The police commissioner read a lengthy speech addressed to the members of MOVE that began with “Attention MOVE: This is America. You have to abide by the laws of the United States.”

MOVE members responded by threatening to kill the officers and making thinly-veiled rape threats about the officers’ wives.

Continue reading MOVE Bombing: The Story of How Philadelphia Became “The City That Bombed Itself” at Ammo.com.