The best kind of looter is the kind that you can shoot.

Especially in emergency situations, those coming onto your property and stealing from you are a serious threat to your life. You must have the ability and means to protect yourself and loved ones.

What other kinds of looters are there, you may ask? In many places, you can protect yourself and your property without fear of prosecution.

But sometimes the gang of looters gets too big to defend yourself against. Like when it is the United States National Guard.

The Caribbean has some serious weather going on right now. The government of the U.S. Virgin Islands has therefore declared its commitment to helping everyone get through this tough time. They did this by authorizing the Virgin Islands National Guard to steal anything they need from anyone living on the Islands. 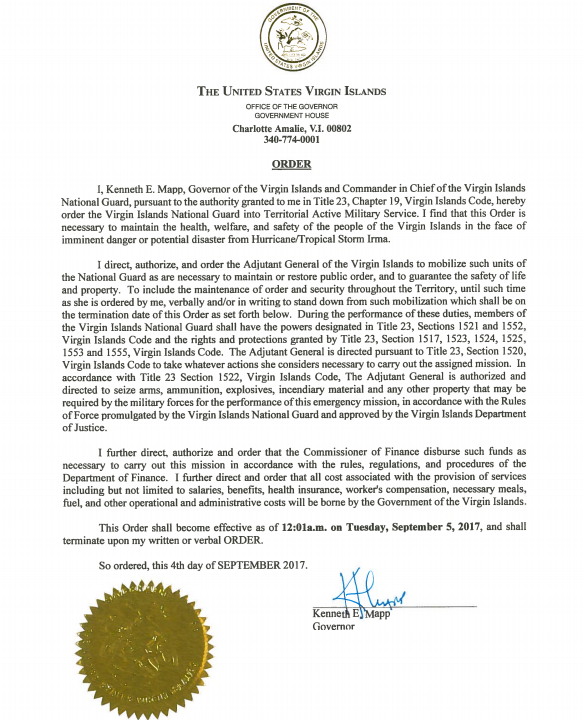 If the right to be secure in your person and property can be taken away with the stroke of a pen, you really never had the rights at all. This is the problem with entrusting the government to protect rights. They claim that they can only do so by trampling on them.

Guns were also confiscated from citizens of New Orleans after Hurricane Katrina. The Mayor declared that only law enforcement could have guns in the aftermath of the disaster. It left civilians open to theft and assault from looters who came after the government sponsored criminals that robbed them of their means of protection.

Last year, the Governor of the U.S. Virgin Islands Kenneth Mapp started a government program to track all the firearms brought onto the islands.

In recapping some local efforts that have been made, Mr. Mapp spoke of Bill No. 31-0383 that he approved on July 30 [2016], pertaining to the registry of firearms, which requires gun owners to declare firearms at local ports immediately upon entry. “There is no more waiting period,” Mr. Mapp said.

The bill provides a necessary means for the government to track firearms and guns entering the territory. Any person wishing to bypass this requirement can be apprehended for criminal violation of our laws.

The government knows where the guns are. Mapp must be excited; he won’t let this crisis go to waste.

Of course the order also authorizes the National Guard to pillage anything else they want besides guns.

Even though price gouging benefits those stuck in a disaster, perhaps supplies will instead be taken by the government and redistributed.

This means that people who are most prepared will be robbed of their supplies. They may be called “hoarders” or “preppers,” but natural disasters prove why it is rational to prepare in the case of emergency.

And government actions like these reveal that it is not simply paranoia which fuels distrust of government. When people are their most vulnerable, government forces take advantage.

So if you are a prepper who hoards supplies, better to keep it on the down low. Don’t go advertising your loot. And maybe the government response to these disasters is a hint that it is time to get out of American controlled territory.

Is this order simply a misguided attempt to help? Or is it a typical government overreach fueled by elitism and opportunity?

Worst yet, is this a testing ground to see what the U.S. National Guard can get away with?

Tell us what you think in the comments.