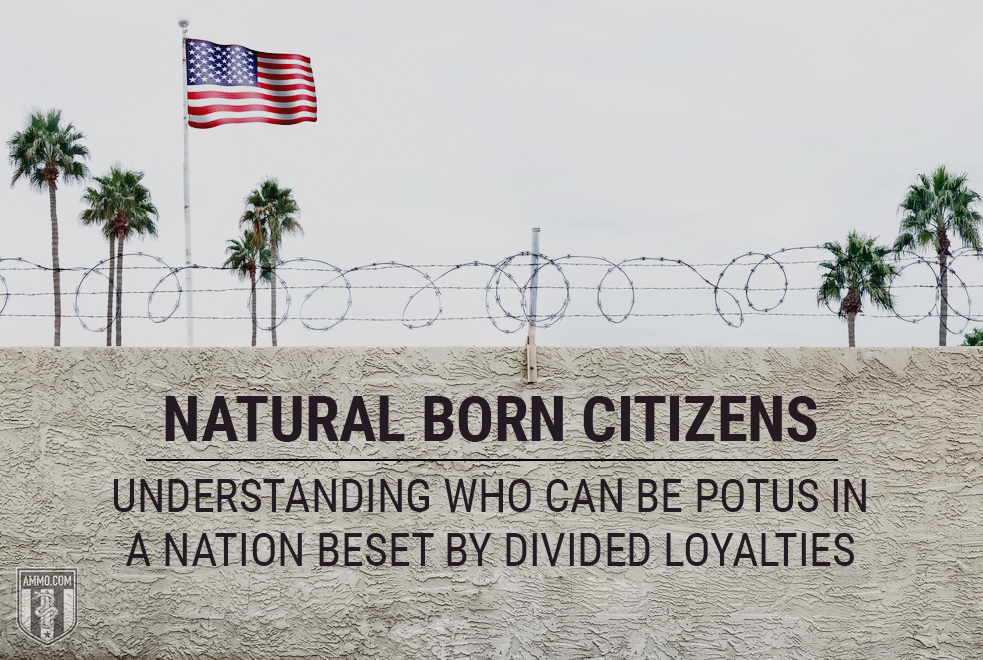 STAFF NEWS & ANALYSIS
Natural Born Citizens: Understanding Who Can Be POTUS in a Nation Beset By Divided Loyalties
By Sam Jacobs - July 16, 2020

Every four years, we are reminded that the president of the United States must be a “natural born citizen.” But what does this even mean? Does it apply to everyone born in America, and is there a difference between a “native born” (one naturalized at birth by statute) and a “natural born” (one who does not require any naturalization) citizen?

While the concept of a “natural born citizen,” which goes all the way back to England, is often discussed in terms of who can and cannot be the president, it alludes to bigger issues: Of illegal vs. legal immigration as well as assimilation, because its goal is to protect against electing someone with divided loyalties. The concept itself has roots in the Old World, but it also presents pressing questions for the United States today that go far beyond presidential politics and to the very core of the character of our nation.

There was a massive immigration to the United States between the end of the Civil War and the beginning of the Great Depression. However, those who are so quick to remind us of this historical truth neglect another: There was also an almost total moratorium on immigration between the Great Depression and when Ted Kennedy and his paymasters opened the borders in 1965. Further, those such as Pat Buchanan and Ann Coulter have explored the role that mass immigration played in dramatically expanding the scope and size of the federal government in the late 19th and early 20th centuries.

Birthright citizenship was for freed slaves. So why is it being used to allow the children of illegal aliens to vote in our elections and enjoy other benefits of citizenship? More to the point, why are we allowing one faction of American politics to import an unlimited number of reliable voters, and how is this undermining our representative republic?

The Roots of Natural Born Citizenship

The concept of “natural born citizens” goes back to at least 1608, with Calvin’s Case. This court case attempted to determine whether or not a child born in Scotland after the Union of the Crowns could be considered an English subject, receiving the rights and privileges thereof. While this might sound far away, this case has been explicitly cited in the United States (not just the colonies) as the bedrock of the natural born citizen question under the law.

The case in question was to determine whether or not a child born in Scotland could inherit estates and own land in England. This was not a theoretical question at the time due to the rights, privileges and duties that came with holding land during this era. It was taken as a given by most medieval legal systems that one could not hold land in two different kingdoms, as this would mean fealty to two possibly antagonistic monarchs.

However, in this case, there were no two antagonistic monarchs: King James VI of Scotland had become King James I of England. While the two were governed as separate countries, they were now in personal union under King James. The British courts ultimately found that those born after his ascension to the English throne were natural born citizens, but those born before it were not.

Practical considerations were likely in play here: Naturalizing all Scots would have meant a much bigger appetite for authoritarian rule and the Divine Right of Kings. The court case was later used by Patriot colonists to argue that Americans had the Rights of Englishmen.

From there, the concept is used throughout English and later British nationality law, but always in a similar manner to the United States. “Natural born” is used, but never defined. The general consensus is that this means that citizenship is transmitted by land (jus soli), not blood (jus sanguinis). However, even this has a number of dangling questions and unresolved contradictions, as we will find out.

What Does the Constitution Say About Natural Born Citizens?

This has been challenged a number of times, most notably by Abdul Karim Hassan, who filed challenges to the rule on the grounds that it violated the Fourth, Fifth and Fourteenth Amendments to the Constitution. In fact, over a period of years from 2011 to 2013, Hassan, a Guyanan-born naturalized citizen of the United States, filed no fewer than six lawsuits to overturn the prohibition against naturalized citizens becoming president of the United States. He lost every one.

There have also been attempted Constitutional Amendments introduced, but none have passed. Each time, these were attempts at making a single naturalized citizen eligible for the presidency: First, there was a Constitutional Amendment proposed in 1974, by Representative Jonathan Bingham, with an eye toward making Secretary of State Henry Kissinger eligible. Kissinger had no interest that we know of in running for the highest office in the land. Rather, the attempt to rewrite the Constitution was more about making him fourth in line for presidential succession.

The second attempt at amending the Constitution in this manner was then-Senator Orrin Hatch’s Equal Opportunity to Govern Amendment in 2003. This was designed to allow California Governor Arnold Schwarzenegger the chance to run for president. Schwarzenegger has long been a critic of the natural born citizen clause of the Constitution and has reportedly considered challenging the law himself at times.

Scholars mostly agree that the purpose of this clause was to prevent undue foreign influence in American government.

Natural Born Citizenship in America Throughout the Years

As with most aspects of American law, there have been some fluctuations in the interpretation of natural born citizenship throughout the years. The Naturalization Act of 1790 clarified that the children of U.S. citizens born abroad would be considered as natural born citizens of the United States. This distinction was repealed by the Naturalization Act of 1795. Both acts required that the father had resided at some point in the United States.

There was an instant debate in the early United States over what constitutes a natural born citizen and how this differed from a “native born” citizen. Lynch v. Clarke in 1844, was the first court case to hint at birthright citizenship, that is citizenship stemming from being born on American soil rather than having it come from one’s parents. The case revolved around a New York State law that restricted inheritance of real estate to U.S. citizens, a common provision at the time. An 1884 court case, In re Look Tin Sing, found that Chinese born in America were citizens regardless of their parental citizenship and how much time they had spent in China since their birth. In 1898, United States v. Wong Kim Ark affirmed that parental citizenship was not a requirement to be a natural born citizen.

But an earlier case, Minor v. Happersett in 1875, found that the citizenship of those born in America of foreign parentage was dubious.

The 1939 decision Perkins v. Elg found once again that those born in the United States were natural born citizens, no matter how much time they spent outside of the country and for the first time specified that they were eligible for the office of president of the United States. Montana v. Kennedy, a 1961 Supreme Court decision, found that a man born of an American woman by Italian paternity was not a citizen because the laws of the time he was born excluded him. At that time (1906), your father needed to be American for you to qualify. The distinction was only granted to both parents some 28 years later in 1934.

Puerto Ricans were made United States citizens by statute by the 1917 Jones–Shafroth Act.

Continue reading Natural Born Citizens: Understanding Who Can Be POTUS in a Nation Beset By Divided Loyalties at Ammo.com.