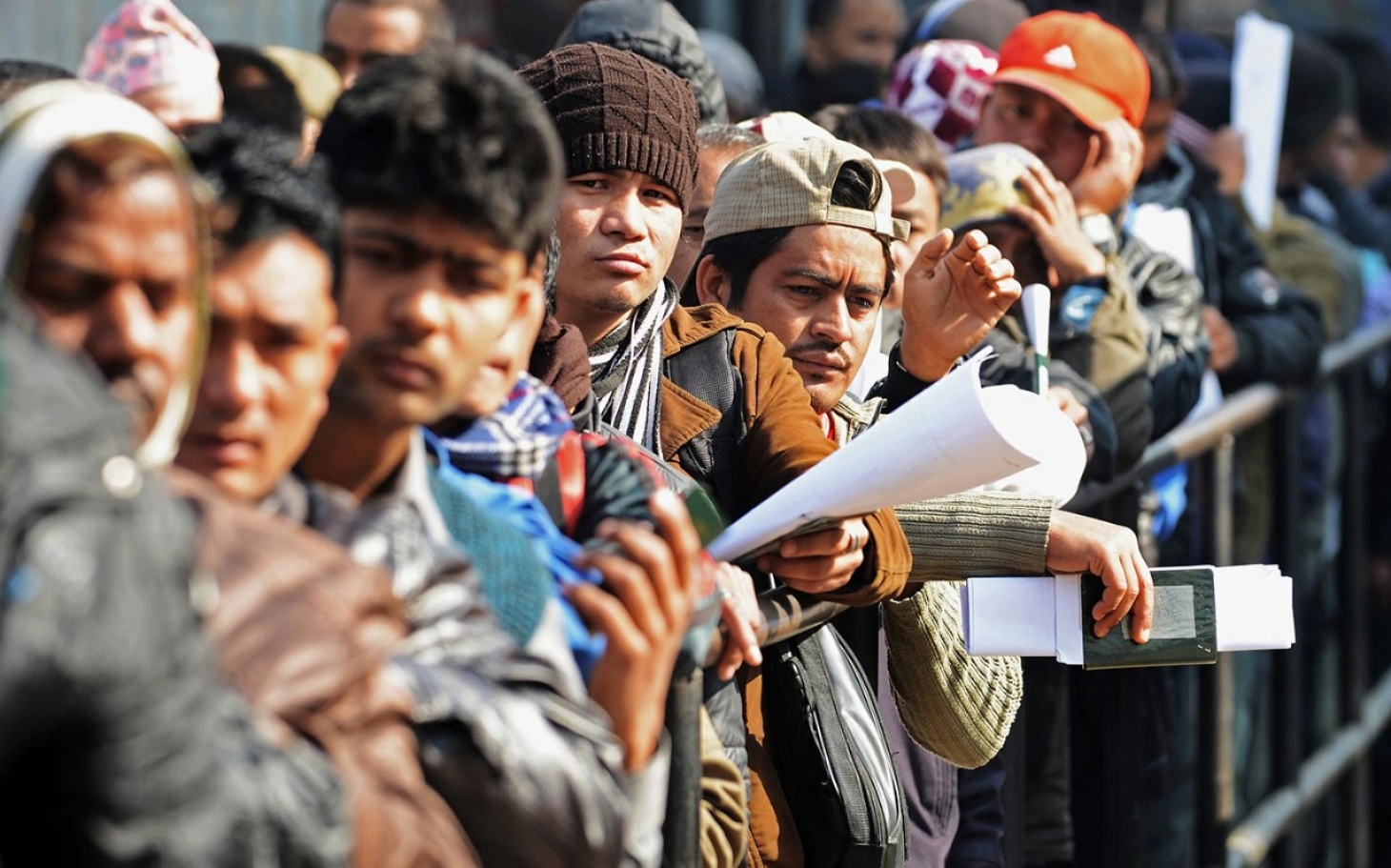 To strive in the face of adversity is the mantle of Nepali tradition. The country has a historically tumultuous government that has dissolved and transformed many times, either due to in-fighting, public pressure, or most infamously, the massacre of its royal family by its own prince.

The current state of government affairs cannot be described without highlighting corruption, especially bribery. Combine this with recent devastating earthquakes, seasonally torrential weather that damages infrastructure, and a radically varied geography, and one has an idea of the issues that face this developing nation. It is no wonder why so many laborers have decided to work overseas despite dangerous conditions.

Families across the nation are working towards their own personal reconstruction effort since the 2015 earthquakes. The government provides subsidies for home construction made with the proper reinforcements to mitigate structural damage. However, large portions of raw materials and manpower have to be provided by the homeowner.

But the subsidy is inaccessible to beneficiaries most in need. According to the Kathmandu Post, “Financially stable people aren’t keen to collect Rs300,000 going through bureaucratic hassles. Those financially deprived are clueless how to seek additional funds for rebuilding homes.”

The National Reconstruction Agency (NRA) has had sluggish performance. Originally created to help expedite reconstruction efforts, this agency has only mobilized approximately 60% of its allocated budget for the current fiscal year. Its housing grant distribution initiative had a similar performance. There is a prospect for change, as recently elected local officials in the Gorkha district have petitioned the NRA to receive more authority over the distribution of funds. Increased involvement from this district could be a bellwether as to whether or not local authorities can alleviate federal inefficiencies.

Investing in education is also a national priority, especially since approximately 5,000 schools were destroyed in the earthquake. The Ministry of Education in turn granted over 150 NGOs and INGOs permission to construct more than 1,000 schools in 2016. Unfortunately, the NRA’s dismal performance only made use of 10% of its budget towards municipal facilities, which includes schools. Yet again, it is clear that foreign aid, like the government aid, cannot solely alleviate the financial stress of a nation’s population. Individual households shoulder their own destiny.

It is the long-standing plight of many Nepali men to work abroad and send money home due to a stagnant domestic job market. In itself, this is a missed opportunity, as the government could put laborers to work towards reconstruction efforts. Thanks to anemic results, workers seek employment in other countries.

Radical growth in Gulf Countries has accounted for a large portion of remittances, which constituted over 30% of the Nepal’s GPD in 2015. Malaysia, Qatar, Saudi Arabia and the UAE are by far the most popular destinations for laborers. In just Qatar alone, over 10,000 Nepalese acquired work permits just at the start of the New Year.

For many households, reconstruction and education are dual initiatives. Citizens naturally want their children to have better prospects in the domestic workforce so they are not exposed to the same dangers of migrant life.

According to a review by the International Labor Organization, there have been over 4,300 deaths among labor migrants who have worked abroad since 2008, the majority of which are due to cardiac arrest. This journey for a better life is marred with exploitation, scams, unsanitary and crowded living conditions, and delayed, reduced, or even canceled payment. Some employers have even negligently denied exit visas to migrants, leaving them in a state of limbo, where they can neither go home nor earn money.

Available data shows a disheartening trend of increased migration, dependence on remittances, poor work conditions, and more frequent death abroad. However, the risks of these hardships are readily endured for the promise of a better life for future generations.

Kami is a married 45-year-old electrician with two daughters and a son in their late teens/early 20s. He acquired his trade by working in his village, and eventually honed his skills by traveling to Kathmandu to work in the city. After years of practice, Kami became a reputable electrician. Kami and I spoke over the phone through a translator the night before his flight to Dubai.

“Because of the earthquake, I have no money. I took a loan to rebuild my house and to pay for my two daughters’ education. One of them is currently a teacher. The other wants to study engineering.”

Kami had once worked in Saudi Arabia. “I worked there for 20 months, but it felt like 20 years. The work was very hard on me. Work in Saudi provided no leisure time.” Despite the difficulty of working in Saudi Arabia, Kami was able to learn Arabic, which looked quite well on his recent application to a contracting agency in Dubai. Three hundred people applied for the job. Only eighty-five were hired.

After paying for his own medical examination and for his plane ticket, Kami is finally set to work in Dubai. He can look forward to working six days a week with the possibility of overtime each day. He will be sharing a room with eight to ten people for the next two years.

“At first, I didn’t want to go abroad, but it helps me save money. I can focus on my work. In Nepal, there are many festivals and holidays, and it’s easy for me to get distracted. In Gulf countries, there is prohibition, which also helps.”

Kami can hope to save about $300USD/month– the type of money he cannot earn at home. His son is also traveling with him to work alongside his father, despite the dangerous conditions.

“I encouraged him to study, but he says that he can go abroad and earn a better life, and he’s not convinced that there is a good job here in Nepal.”

Nepalese culture is represented by the individual’s dedication and loyalty despite hazardous conditions. The Sherpa ethnic community has lived in the Himalayas for centuries and is a world-class group of mountain climbers. They have guided western expeditions to many Himalayan peaks, most notably Mount Everest. While the climbers themselves have a long, exhaustive climb ahead of them, the Sherpas are the ones who climb ahead. They prepare camp, carry supplies and meals, guide their clients all the way to the summit, and pack down camp when the expedition is over.

Death by altitude sickness, exposure, high falls, exhaustion, and avalanche are occupational hazards that are all very real possibilities. In fact, according to a study from Outside, it was more dangerous to be a Sherpa between 2004-2014 than it was to be a US soldier in Iraq from 2003-2007. Like the migrant workers, they too risk their lives because the financial reward is far greater than any they could otherwise receive.

Similarly, Gurkha warriors of ancient lore were and are known for their bravery despite facing certain death. The British East India Company suffered heavy losses as it tried to invade Nepal during the Anglo-Nepalese War in the early 19th century. As a result, a peace treaty was signed, which would later allow the British to enlist Gurkha soldiers. More than 200,000 fought in the two world wars.

In order to be accepted into the British military, a prospective soldier must complete numerous physical tests, including running uphill for 40 minutes with 70lbs of rocks strapped to his back. After a minimum 15-year service, Gurkhas are allowed to retire with a UK pension. More than 3,000 Nepalese have worked in Afghanistan as security guards.

Kami’s dilemma is an authentic snapshot of contemporary Nepali life. On the one hand, he puts himself at risk each time he leaves for work, so his children do not have to. In this way, his daughters can invest their time in a higher education, and improve Nepal through providing services in education and civil construction. On the other hand, opportunities are currently so limited that he cannot dissuade, or even disagree with his son, who is convinced that life as a migrant worker is one of his best options for financial freedom. It is with this quandary that the Nepalese take part in their national tradition, and their personal future.

It’s no surprise that the recent Nepali pop song Saili went viral when it launched in January 2017, as it captures the ethos of this circumstance. The song is a poignant love story about a newly married couple, who forsake their youth in search of a decent life. In good health and physical form, the husband departs to labor and toil under harsh conditions in a foreign land. Meanwhile, his wife longingly waits for his safe return.

Migrant workers are usually pushed into an early retirement around the age of 40, as their bodies wear down from the arduous physical work. So the young husband assures his wife that she has no need to worry; he’ll see her when he’s 41.