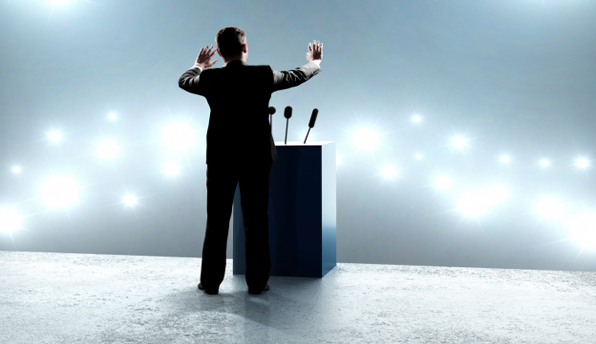 Is this Obama's 'malaise' moment? … President Barack Obama's situation is getting perilously close to President Jimmy Carter's in 1979. Americans see little evidence of an economic recovery, more and more workers are giving up hope of ever finding a job, the burden of student loan debt — now larger than credit-card debt — is crushing the hopes of young people, the president's signature achievement, healthcare reform, is broadly unpopular, our borders are overrun by migrant children, Iraq is falling apart, Syria and Ukraine are in turmoil and the president seems hapless and ineffectual. – Reuters

Dominant Social Theme: History repeats itself. When the president goes bad, so does the country.

Free-Market Analysis: So we learn once more that the US president stands as a proxy for the entire country.

If the president, you see, isn't doing his job, then the entire country of some 300 million people can sink into a "malaise."

When the president is vibrant, so are you.

When the president isn't doing what he needs to do, you feel lethargic and hopeless.

Reuters puts it as bluntly as possible: "Americans become deeply disturbed if they see events spinning out of control and their elected leaders incapable of managing them."

Is that so, dear reader? Do you look first to President Barack Obama to solve your problems? Is your first instinct when happening upon an unexpected challenge to ponder ways that you can depose your president? It seems, well … patronizing to state so bluntly that US citizens, members of a once-proud republic, can only ponder a solution based on political change when faced with personal or societal vicissitudes.

"Malaise" was the term used in 1979 to describe the deep pessimism Americans felt about the way things were going in the country. That year, inflation was soaring, unemployment was rising, the United States faced a debilitating energy crisis, a tax revolt had broken out, Americans were waiting in long gas lines, and Iran had a revolution, further roiling the Middle East. Carter seemed hapless and ineffectual.

… In 1979, Gallup reported deteriorating public confidence in the presidency, Congress, the U.S. Supreme Court, public schools, newspapers, banks, big business, organized labor, even the military and organized religion. The average percentage of Americans expressing "a great deal" or "quite a lot" of confidence in these institutions in 1979? Forty-eight. And what is it now? Thirty.

Americans become deeply disturbed if they see events spinning out of control and their elected leaders incapable of managing them. That was the perception that doomed Carter. It is now becoming a problem for Obama.

The American public actually agrees with most of Obama's policies, particularly his caution in making foreign-policy commitments. They are also terrified of what Republicans would do if they ever took over. But the public doesn't see any results. Congress does nothing, and whatever Obama is doing — on the economy, on immigration, in Iraq, in Ukraine — is not making a lot of difference.

… Obama is getting 78 percent support from Democrats and just 9 percent from Republicans — a whopping 69 point difference … Obama's problems probably doom his vice president, Joe Biden, as well. If Biden were the Democratic nominee in 2016, voters would see it as a third term for Obama.

Is there anyone out there who looks like a strong leader? Right now, people don't know too much about the potential Republican contenders. But they know a great deal about Hillary Clinton. And what they see is a sharp contrast with Obama.

On every one of nine issues tested in a CNN poll this month, the public thinks Clinton would do a better job than Obama … Gallup recently asked Americans to rate the five living presidents. Obama was rated the worst. Carter and George W. Bush were only slightly higher. Which living president do people consider the best? Fellow named Bill Clinton. Another Clinton? That doesn't sound too bad.

Is this a serious analysis? We have trouble believing the columnist was actually paid to write an article concluding that Hillary Clinton would be a "strong leader" that would unite the country.

In fact, Ms. Clinton is not a uniter but a compulsive divider. She is instinctively a polarizing person, a cynic of great political tenure who believes it "takes a village" to raise a child. In other words, she believes the state must provide the solution to the woes of the human condition.

This Reuters article – which is surely in line with the larger Reuters philosophy – takes the same view. If people are to live happily and prosperously, they must do so under a strong "leader." Most of what Reuters writes or reports is underpinned by this sort of perspective.

Of course it is unclear what makes a leader "strong," just as it is unclear what there was about Barack Obama that indicated to voters that he would be a "good" president capable of leading the United States in the direction of renewed greatness.

Oh, and by the way … really, there is no United States. There are only people living in a given region, united by culture but confused to a degree about how societies and economies work.

Many people, too many unfortunately, believe strong leadership – even an authoritarian approach – is necessary for a cohesive and prosperous society. But free-market analysis helps provide clarity: It is individual human action that creates the best results.

This approach was codified by FA Hayek as "spontaneous order" – a situation in which people elaborate on the economic and industrial culture around them without prompting or top-down organization. We can see this most clearly of late as regards the Internet. Here is a facility that hundreds of thousands have contributed to without coercion or even coordination. People simply decided to contribute, learned how to do so on their own and did so.

What is sad, and inevitable, is that like any other great human advance, once the Internet is sufficiently evolved, the balance begins to tip and people begin to see more advantage in taking it over than leaving it alone.

It is mostly an organized group of internationalists that see the advantages of controlling the Internet and the alternative media that has done so much to expose the "directed history" of the modern era.

There are monied elements that will apparently stop at nothing to create an ever-closer world hierarchy and these are the same individuals and groups that promote the idea of "strong leadership." But it is individual human action, not "strong leaders" running the modern age's vast, regulatory democracies, that build healthy societies.

History shows us this is so. There is much about the world that is freer today than yesterday, thanks in large part to the Internet and the information it has provided. But there is much that is less free, too.

A globalist group has seen their plans exposed and their biases presented; they are moving as quickly as possible it seems to take further control of the West's and world's economy via such programs as CAFTA and GAFTA and other internationalist treaties and facilities. These provide elements of financial control that will make economic – and therefore personal – freedom more difficult.

Recall, too, that the world is in the grip of an unprecedented inflation, and that this central banking phenomenon is entirely purposeful and is aimed at creating a continued "Wall Street Party" to further raise equity valuations.

In fact, given this program, there is much opportunity amidst the current challenges, including investment opportunities. But in the longer term, we believe much of what seems attractive today will come crashing down tomorrow as asset bubbles collapse once more.

It may be fashionable to analyze the "malaise" of a given nation-state and how a national leader is inducing it, but this is a kind of fantasy, a combining of various dominant social themes to arrive at a conclusion that has no more veracity than the promotional methodologies themselves.

There are many challenges ahead, but one must look as much as possible to one's own resources – familial and communal – to solve them. Political "leadership" will not.