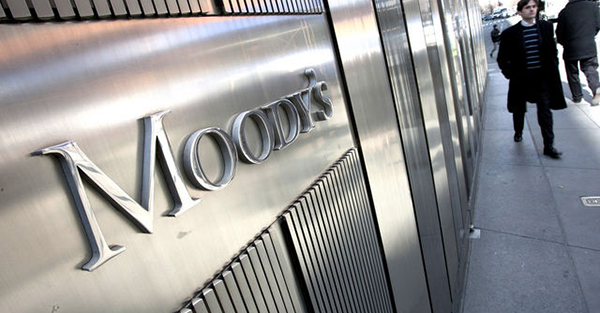 In the middle of a heated battle against my jetlag yesterday, I finally decided to exercise the nuclear option and turn on CNBC in order to stay awake.

I figured someone would say something completely ridiculous, and it would get my blood boiling enough to power through the next couple of hours.

Within minutes I saw a top economist for Moody’s (one of the largest rating agencies in the world) saying that there are absolutely zero signs of recession.

Boom. I was suddenly so wide-awake it was like that adrenaline scene from Pulp Fiction.

I couldn’t believe what I had just heard. Moody’s. No recession. Seriously?

In addition to being criminally complicit in committing widespread fraud that fueled the housing bubble ten years ago, Moody’s takes advantage of every opportunity to show the world that they don’t have a clue when it comes to economic forecasts.

It’s like what Churchill said about democracy– it’s the worst form of government, except for all the others.

Well, Moody’s is the worst rating agency and economic forecaster… except for all the others.

These are the same guys (along with their colleagues at S&P, Fitch, etc.) who totally missed the boat on the housing market and slapped pristine credit ratings on subprime mortgage bonds.

They also missed the boat on the subsequent banking crisis, giving strong ratings to Lehman Brothers and AIG right up through September 2008.

Lehman, of course, went bust that month. And AIG had to be bailed out by the taxpayer.

Moody’s and the gang also missed the rest of the global financial crisis, the collapse of Iceland, Greece’s bankruptcy, and just about every other significant financial event since… forever.

These guys are so drunk on their own Kool-Aid that in October 2007, Moody’s announced that “the economy is not going to slide away into recession.”

In December 2007, they called the bottom in the housing market, suggesting that prices would not fall any further.

Of course, the following year, the entire world was engulfed in the biggest financial crisis since the Great Depression.

Everyone assumed that the good times would last forever.

So when the agency that consistently fails to predict recession predicts that there will be no recession, you can pretty much guess what’s going to happen next.

This is what virtually assures negative interest rates in America.

And over the last seven recessions in the Land of the Free, the Federal Reserve has cut interest rates an average of 5.68%.

Think about it– rates right now are just 0.25%. So even with a tiny cut the Fed is almost guaranteed to take interest rates into negative territory in the next recession.

We can see the effects of this in Europe and Japan where negative interest rates already exist.

Bank balance sheets become riskier, and people start trying to withdraw their money as a result.

In Japan (which just recently made interest rates negative), one of the fastest selling items is home safes, which people are buying in order to hold physical cash.

In Europe (where negative interest rates have existed for a while longer), bank controls have already been put in place to prevent people from withdrawing too much of their own money out of the banking system.

This is a form of capital controls– a tool that desperate governments use to trap your savings within a failed system and steal your prosperity.

Wherever you see negative interest rates you are bound to see capital controls close behind.

In light of this data there are fundamentally two courses of action.

1) Hope. Pretend that everything is going to be OK until the end of time.

2) Action. Take sensible steps BEFORE any of the metaphor hits the fan.

One of the easiest things you can do is withdraw some physical cash out of the banking system.

Buy a safe and hold 50s and 20s (they might ban the Benjamins, so avoid $100 bills). And don’t take out more than a few thousand dollars at a time.

It’s hard to imagine you’re worse off for keeping a safe full of cash.

Even if nothing bad ever happens in the banking system, you can still use the cash. And all you’re missing out on is 0.01% interest in your checking account. Big deal.

But if the trend continues and capital controls arise, the value of cash (and gold for that matter) will go through the roof. And you’ll wish you had acquired some while you still had the chance.