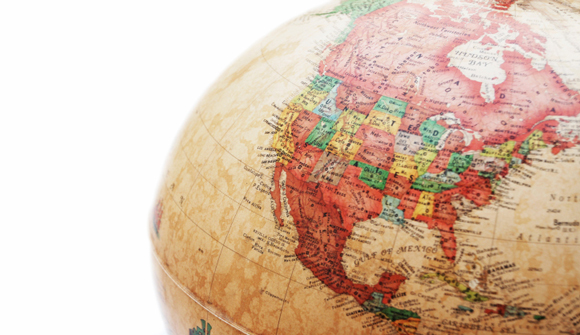 Rebooting the agreement tops the agenda at the meeting of the leaders of the three countries scheduled to take place in Mexico this February. "There's a joint willingness among all three countries to relaunch the idea of North America, not just in terms of manufacturing, but in innovation and design," says Sergio Alcocer, under-secretary for North America in Mexico's foreign ministry. – The Economist

Dominant Social Theme: There is no North American Union planned. But it is true that all three countries could be merged simply because the trends point that way …

Free-Market Analysis: Let us begin this analysis with a fragment of one of our favorite poems by Percy Bysshe Shelley:

On the pedestal these words appear:

"My name is Ozymandias, king of kings:

Look on my works, ye Mighty, and despair!"

Nothing beside remains. Round the decay

Of that colossal wreck, boundless and bare

The lone and level sands stretch far away.

Hope you don't mind, dear reader, but this poem always reminds us of the directed history we cover regularly.

In fact, we've been writing about this a lot lately because it's obvious. Now that Obamacare has been implemented, next on the agenda is "immigration reform," which is another step toward full "North American" integration.

The mainstream media is useless in this regard. Not a single major outlet that we can tell stayed on the story of Mexico's legislative creation of a single-payer health system. Maybe it was major news in Mexico, but not in the US.

So many secrets; and we are supposed to learn only a little: Those who promote internationalism and have the clout are inexorably building one trans-regional union after another. There are African unions, Asian unions and Mercosur in South America.

Want to merge a region? Merge the industrial interests and the sociopolitical structure will follow.

Thank goodness for the Internet, which lets us understand finally how all this works. But in the short term, knowledge doesn't slow the momentum.

The Economist article explains it …

In May 2013 Barack Obama—who in 2007, on the campaign trail, called NAFTA a "mistake"—trumpeted cross-border trade on a visit to Mexico, noting that the United States exports more to Mexico than to the BRIC countries—Brazil, Russia, India and China—combined. On a visit in September his vice-president, Joe Biden, dwelt on NAFTA's untapped potential.

… The case for optimism about NAFTA is not limited to opinion polls and political summitry. Nor is it simply a response to the doldrums that the agreement has been in over most of the past decade, with its infrastructure badly in need of an upgrade and regulatory structures left behind by the pace of technological change.

The fundamentals also favour a resurgence in North American trade. Mr Alcocer talks of a "rejuvenated" region benefiting from cheap and abundant energy, a young workforce, and costs that are increasingly competitive with those in China.

The aim, though quietly stated, is to develop a "Factory North America" to rival "Factory Asia".

In the longer term, two further things favour North America; demography and energy. Two-fifths of Mexicans are under 20. Between 2000 and 2030, BCG expects Mexico's labour force to grow by 58% and the United States' by 18%, as China's shrinks by 3%.

And Mr Alcocer says the shale-gas revolution, the development of Canada's oil sands, and a constitutional change in December allowing private firms to invest in Mexican energy, could give the industries employing those people secure supplies of low-cost energy for the foreseeable future.

… A more seamless North America should help reduce the differences between living standards around the region, which would benefit all three countries—not least because a richer Mexico would mean fewer problems of illegal immigration, violence and corruption in the neighbourhood.

Can it be any clearer than this? The whole article is merely a pumping-up of the benefits to be had from "closer" (and closer still) industrial relations.

And notice this line:

And Mr Alcocer says the shale-gas revolution, the development of Canada's oil sands, and a constitutional change in December allowing private firms to invest in Mexican energy, could give the industries employing those people secure supplies of low-cost energy for the foreseeable future.

Just as we've been predicting, fracking is now being cited as part of the mix of an exciting industrial future. Fracking technology has been around for a number of decades but it's suddenly begun to make radical progress. Coincidence or yet more directed history?

And don't forget, please, that NAFTA is managed trade. Real free trade is simple. Businesses do it all the time and cross-border, too. If a businessman wants to trade with another businessman, what should stop him?

But this is nothing like commercial freedom. It begins, in fact, with corporatism, the idea that larger – and larger – corporations are driving this massive trade agreement.

And yet … lacking Supreme Court decisions, corporations would not exist. So now we have two artificial externalities: a trade agreement put together by politicians and technocrats and corporations created by judicial fiat.

We are not supposed to notice this, of course. We are supposed to surrender numbly to the idea that free trade is what we are told it is. But it is not.

America's trade with Mexico increased by 506% between 1993 and 2012, compared with 279% with non-NAFTA countries. In 2011 America traded as much with Canada and Mexico as it did with the BRIC countries (Brazil, Russia, India, China), Japan and South Korea combined.

The "giant sucking sound" that Ross Perot, a presidential candidate, predicted would be heard as Mexico hoovered up American jobs never materialised; if jobs have moved anywhere in the past two decades, they have gone to China, not Mexico. Industries from aerospace to cars have woven supply chains back and forth across North America's borders.

Factory North America, eh? Notice the text seems positively euphoric about the growth of cross-border trade but that's what NAFTA was supposed to do.

NAFTA was a document of more than a thousand pages. No doubt it enunciated in detail the various mechanisms that have now expanded this spurt of trade. In other words, NAFTA was supposed to bring about just the kind of industrial evolution that The Economist is now trumpeting.

Directed history – that's the phrase that comes to mind. Create a treaty to force trade in a certain direction and then use the results to make the argument for a "closer union."

Presumably the same people who are campaigning for "immigration reform," which is merely shorthand for free passage of US and Mexican citizens from one country to the other.

Here at The Daily Bell we have no problems with people of Mexican descent crossing over into the US and vice-versa. In fact, we don't believe there ought to be a passport and visa system at all. The world worked quite well without one until after World War Two.

But the point is that this entire "closer union" is being MANAGED. It is not being left up to individuals affected. It is being produced, as so much of history is these days, as a great dramatic event. Treaties force-feed industry to certain places; corporations carry out the will of their internationalist owners; politicians obediently fall in line (sooner or later) to pass laws that increase cross-border traffic.

And soon, perhaps, President Barack Obama will have another great "triumph" to tout. The "comeback kid" will ram immigration reform through Congress as he did his landmark health care legislation.

But these triumphs are actually markers of an authoritarian combine at work behind the scenes. The globalists are busy spinning their webs and no one really wins when these surreptitious legislative mandates are passed.

Obama won't win in the long run, not from history's standpoint, nor will his allies. And above all, those behind these gambits won't win, either.

History's cold and clinical eye surely shows us. And poets, too.