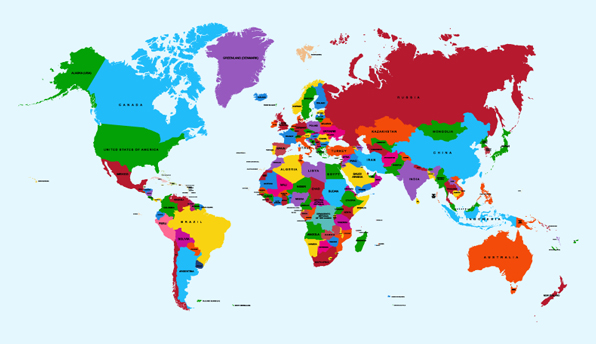 Ukraine may have to go nuclear, says Kiev lawmaker … Ukraine may have to arm itself with nuclear weapons if the United States and other world powers refuse to enforce a security pact that obligates them to reverse the Moscow-backed takeover of Crimea, a member of the Ukraine parliament told USA TODAY. The United States, Great Britain and Russia agreed in a pact "to assure Ukraine's territorial integrity" in return for Ukraine giving up a nuclear arsenal it inherited from the Soviet Union after declaring independence in 1991, said Pavlo Rizanenko, a member of the Ukrainian parliament. – USA Today

Free-Market Analysis: One of the biggest dominant social themes of the power elite has to do with endowing lines on a map with personhood.

That is, when a crisis needs to be whipped up, reporting immediately begins to refer to such nonexistent entities as nation-states. It's "Russia this" … and "America that."

And nowadays, politicians and journalists don't have to refer to all those funny little European countries anymore. They can simply but grandiloquently stand to cite in ringing tones, "Europe won't stand for it!" or "Europe must insist on her rights!"

This sort of rhetorical device has been a surefire way of inciting violence among we naked apes probably for, well … eons.

And it's happening again in Ukraine and Crimea. Here's more from the USA Today article:

"We gave up nuclear weapons because of this agreement," said Rizanenko, a member of the Udar Party headed by Vitali Klitschko, a candidate for president. "Now there's a strong sentiment in Ukraine that we made a big mistake."

His statements come as Russia raised the possibility it may send its troops beyond the Crimean peninsula on the Black Sea into the eastern half of Ukraine. The Russian Foreign Ministry said lawlessness "now rules in eastern regions of Ukraine as a result of the actions of fighters of the so-called 'right sector' with the full connivance" of Ukraine's authorities.

… To reassure the Ukrainians, the United States and leaders of the United Kingdom and Russia signed in 1994 the "Budapest Memorandum on Security Assurances" in which the signatories promised that none of them would threaten or use force to alter the territorial integrity or political independence of Ukraine.

They specifically pledged not to militarily occupy Ukraine. Although the pact was made binding according to international law, it said nothing that requires a nation to act against another that invades Ukraine. The memorandum requires only that the signatories would "consult in the event a situation arises which raises a question concerning these commitments."

Ukraine gave up thousands of nuclear warheads in return for the promise. There is little doubt that Russia has in fact placed its military forces in Ukraine's province of Crimea. Russia's foreign minister has said its troops are there to protect Russian lives and interests.

The provocations launched at the Ukraine were not the product of lines on a map. They were planned by flesh-and-blood operatives of Foggy Bottom and the CIA – and likely other Intel agencies in the US.

Maybe those planning these sorts of things knew quite well how Vladimir Putin would respond. Maybe he's supposed to respond that way. Maybe in a time of economic crisis those responsible for the current mess seek the distraction of heightened global tension.

We know US officials were involved because the State Department's Victoria Nuland's conversations were tapped and made public. Here, from Information Clearing House:

What is it about America's women diplomats? They seem so hard and cloned – bereft of any humanity or intelligence. Presumably, these women are supposed to represent social advance for the female gender. But, far from displaying female independence, they are just a pathetic copy of the worst traits in American male politicians – aggressive, arrogant and completely arrant in their views.

Take Victoria Nuland – the US Assistant Secretary of State – who was caught using obscene language in a phone call about the European Union and the political affairs of Ukraine. In her previous posting as a spokeswoman for the US State Department, Nuland had the demeanor of a robotic matron with a swivel eye.

Now in her new role of covertly rallying anti-government protesters in Ukraine, Nuland has emerged to sound like a bubblegum-chewing Mafia doll. In her leaked private conversation with the US ambassador to Kiev, the American female diplomat is heard laying down in imperious tones how a new government in Ukraine should be constituted. Nuland talks about "gluing together" a sovereign country as if it is a mere plaything, and she stipulates which members of the US-backed street rabble in Kiev should or should not be included in any Washington-approved new government in the former Soviet republic.

We don't know who actually tapped and leaked Nuland's private call to the US ambassador in Kiev, Geoffrey Pyatt. It could have been the Ukrainian or Russian secret services, but, regardless, it was an inspired move to reveal it. For the disclosure, which has been posted on the internet, lays bare the subversive meddling agenda of Washington in Ukrainian internal affairs. Up to now, the Americans have been piously pretending that their involvement is one of a bystander supporting democracy from afar.]

But, thanks to the Nuland's foul-mouthed indiscretion, the truth is out …

The use of placeholders to substitute for flesh-and-blood people is most disturbing, but is an age-old strategy of the West's bought-and-paid-for media. Such utilizations create a linguistic trick of inevitability. Because no people are involved in these massive confrontations, they seem more likely than ever to end in collision. After all, how does "Russia" change its mind?

Does Russia even have a mind? The people who run "Russia" certainly do. As do the people who run the geographical area known as the United States. And the use of these placeholders to substitute for people like Nuland – who are actually making decisions – is intended, quite cold-bloodedly in our view, to exacerbate the crisis and turn strategy into certainty.

It's very instructive to see such memes in play and to observe their escalation. It reminds us that nothing is as it seems and that there is a small group of powerful globalists intent on generating continual violence around the world in order to benefit from the Hegelian dialectic it triggers.

Thesis … antithesis … synthesis. And so directed history marches on in the direction those wielding it wish it to go. At least that's how it worked in the 20th century. Let's see if the utilization of such memes is as effective in the 21st …