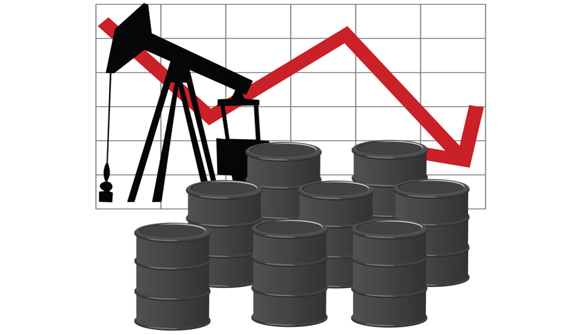 America's Going to Lose the Oil Price War … The financial debacle that has befallen Russia as the price of Brent crude dropped 50 percent in the last four months has overshadowed the one that potentially awaits the U.S. shale industry in 2015. It's time to heed it, because Saudi Arabia and other major Middle Eastern oil producers are unlikely to blink and cut output, and the price is now approaching a level where U.S. production will begin shutting down. – Bloomberg

Free-Market Analysis: In our view, there is a kind of cold war going on between the US and Russia. The US worked to destabilize Ukraine from what we can tell and now along with Saudi Arabia has caused the price of oil to plummet.

Low prices for oil put pressure on Russia's economy and currency. Moody's has just downgraded Russia and the ruble. This is a kind of war by proxy, one the US seems confident of winning.

But this article makes the case that in the long run, market forces could prove stronger than manipulation.

Representatives of the leading members of the Organization of Petroleum Exporting countries have been saying for weeks they would not pump less oil no matter how low its price goes.

Saudi Arabian Oil Minister Ali Al-Naimi has said even $20 per barrel wouldn't trigger a change of heart. Initial reactions in the U.S. were confident: U.S. oil producers were resilient enough; they would keep producing even at very low sale prices because the marginal cost of pumping from existing wells was even lower; OPEC would lose because its members' social safety nets depends on the oil price; and anyway, OPEC was dead.

That optimism was reminiscent of the cavalier Russian reaction at the beginning of the price slide: In October, Russian President Vladimir Putin said "none of the serious players" was interested in an oil price below $80. This complacency has taken Russia to the brink: On Friday, Fitch downgraded its credit rating to a notch above junk, and it'll probably go lower as the ruble continues to devalue in line with the oil slump.

It's generally a bad idea to act cocky in a price war. By definition, everybody is going to get hurt, and any victory can only be relative. The winner is he who can take the most pain. My tentative bet so far is on the Saudis — and, though it might seem counterintuitive, the Russians.

For now, the only sign that U.S. crude oil production may shrink is the falling number of operational oil rigs in the U.S. It was down to 1750 last week, 61 less than the week before and four less than a year ago. Oil output, however, is still at a record level. In the week that ended on Jan. 2, when the number of rigs also dropped, it reached 9.13 million barrels a day, more than ever before.

Oil companies are only stopping production at their worst wells, which only produce a few barrels a day – at current prices, those wells aren't worth the lease payments on the equipment. Since nobody is cutting production, the price keeps going down; oday, Brent was at $48.27 per barrel and trends are still heading downward.

The article goes on to point out that "All this will eventually have an impact." The basic impact would be felt by producers "shutting-in production at a level where there is a significant reduction in global oil supply. At $40 Brent, 1.5 million barrels per day is cash negative with the largest contribution coming from several oil sands projects in Canada, followed by the U.S.A. and then Colombia."

The weak link here is US fracking. Frackers, according to the article, will keep pumping at a loss because they have debts: "about $200 billion in total debt, comparable to the financing needs of Russia's state energy companies."

Eventually this newfound US industry will begin to face bankruptcy. First, will go the highly leveraged producers. But the industry will not contract in an orderly fashion because healthier companies won't be in a position to purchase the unhealthy ones. A crisis of investor confidence will affect all concerned.

This could be a bloody, prolonged battle with an uncertain outcome. The oil price is rather inelastic to short-term changes in demand and supply. Its course this year will, therefore, be largely dictated by the news and the market's reaction to it. A wave of bankruptcies in the U.S. shale industry will probably drive it up because it will be perceived as a negative factor for supply.

How high it will go, however, is unpredictable. It may actually rise enough to enable consolidation in the U.S. shale industry, giving it second wind and driving OPEC countries, Russia, Mexico and Norway into greater difficulties – or it might just even out at a level that would make the U.S. forget about its shale boom. That would have dire consequences for the U.S. economic recovery.

Surprisingly, the article makes the suggestion that the US government might want to start preparing for the day when fracking begins to melt down from a financial standpoint. If the price of oil hovers in the US$40 area, the US may find it is in its strategic interest to "bail out or temporarily subsidize shale producers."

The oil wars have just begun.