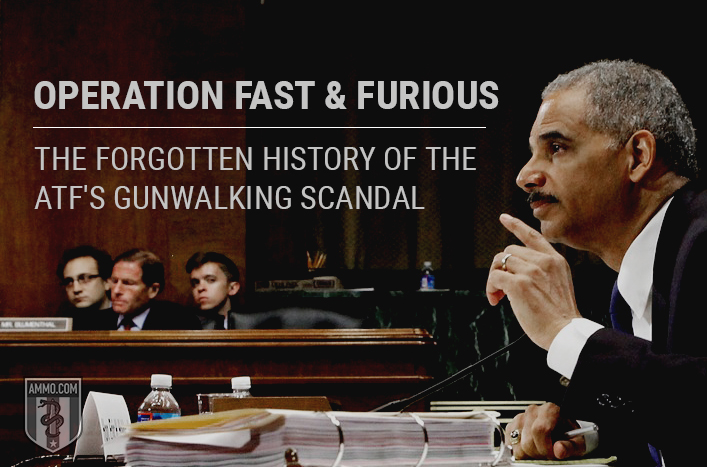 The ATF isn’t all bad. In fact, they had a policy of letting illegal gun purchases go between 2006 and 2011. It ended up getting U.S. Border Patrol Agent Brian Terry killed on December 14, 2010, and let Mexican criminals get enough guns that they were found at over 150 crime scenes where Mexican citizens were either killed or maimed. And some of the guns were used in the November 2015 terrorist attack in Paris at the Bataclan. But other than that, it turned out just fine.

(In case you’re not picking up on it, we’re laying on the sarcasm very thick right now.)

You probably know what was officially called “Project Gunrunner” as “Operation Fast and Furious.” Started under George W. Bush, this ATF policy audaciously grew under President Obama and became indicative of the perceived attack on American gun owners by both policy makers and their friends in the establishment media.

It’s one of many scandals of the Obama Administration that was never given as much press attention as, for example, Russia buying Facebook ads about NoFap and Pizzagate. Given that the guns run by the ATF were allowed to kill hundreds and that subsequent Congressional investigations resulted in Eric Holder, President Obama’s Attorney General, becoming the first sitting cabinet member to be held in criminal contempt of Congress ever, this is shocking. At least for anyone still under the illusion that the establishment media is a fair and impartial source of information.

Sit down and get ready to dig into what is perhaps the most egregious scandal of President Drone’s administration – and there’s a lot to pick from.

What Was Project Gunrunner?

Project Gunrunner was a project of the ATF, designed to intercept weapons bound for Mexican criminal organizations. The ATF (the same people who entrapped peaceful, law-abiding citizen Randy Weaver into selling them a single sawed-off shotgun, then pursued him as if he were mounting an armed insurrection, shooting and killing his wife, son and dog) decided to allow straw purchases (which are technically legal, but often involve the crime of providing false information when purchasing a firearm) to happen in the hopes that these purchases would end up in the hands of Mexican criminal organizations.

The thinking was that, rather than going after crimes considered to be small potatoes, the ATF could focus on bigger fish – organizational gun running in the Southwest and over the border in Mexico. By letting guns purchased illegally to “walk” (i.e., not be prosecuted), the federal government can keep an eye on them, arresting people for much more serious crimes later. That’s the idea, anyway, but the execution ended up being something much different.

Beginning in 2006, the Phoenix Office of the ATF not only allowed, but also facilitated and encouraged, straw purchases of firearms to known weapons traffickers. They then allowed the weapons to “walk” to Mexico. Gun Owners of America has stated that they believe this was an attempt to boost statistics for the ATF, thus securing more funding – most of the funding for this came from $40 million in competitive grants from the 2009 “stimulus package,” which was largely a giant giveaway to large banks.

(Such self-serving actions by the ATF are not unheard of. During the congressional inquiry following the ATF’s siege of the Branch Davidian complex in Waco, Henry Ruth, one of the three independent reviewers from the U.S. Treasury Department, testified that: “The ATF needed good publicity. With its appropriations hearings a week away, a successful raid this size would produce major positive headlines to counter the ATF’s reputation as a rogue agency whose debacles blackened the reputations of other agencies. And it would scare the public enough about fringe groups to create political pressure on Congress to increase its budget.”)

Some legitimate gun dealers objected to being involved in Project Gunrunner, as did some ATF agents, but they were strongarmed into participation by top brass. What’s more, the practices that became associated with Project Gunrunner were in opposition to long-established ATF operating procedures.

What Was Operation Wide Receiver?

What later became known as “Operation Fast and Furious” is actually only one operation among many under the umbrella of Project Gunrunner. Another was known as Operation Wide Receiver, which ran from early 2006 to late 2007, on George W. Bush’s watch.

In this case, a licensed firearms dealer notified the ATF of a suspicious purchase and was subsequently hired as a confidential informant. The ATF began monitoring straw purchases made through this dealer. During the operation, the dealer sold 450 weapons, including AR-15s chambered in .223, AKs chambered in 7.62×39, and Colt .38s. The lion’s share of these weapons were lost after moving south of the border – only 64 of the weapons were seized before crossing the Mexican border. Most of the cases for the prosecution were so flimsy that the U.S. Attorney’s Office was reluctant to pursue prosecution in any of them. The Bush-era Department of Justice declined to prosecute any of these cases.

The Obama Administration began prosecuting cases in 2010, three years after the project ended. Eventually, nine cases were prosecuted, all for process crimes, with one case dropped, five defendants pleading guilty, one sentenced and two remaining fugitives.

What Was Operation Fast and Furious?

Operation Fast and Furious simply picked up the gunwalking practices which had been going on previously, as if they were new again. Once again, the operation began when a firearms dealer contacted the ATF about a suspicious purchase. Unlike Operation Wide Receiver, many of these purchases involved hundreds of weapons. What’s more, there was no official collaboration between the firearms dealers and the ATF. Perhaps most disturbing is that both Mexican law enforcement officials and the Mexico City Office of the ATF were left completely in the dark about what was going on.

In January 2010, the ATF applied for and received additional funding, and was reorganized as a strike force that included members of the ATF, FBI, DEA and ICE, run through the United States Attorney’s Office rather than under the jurisdiction of the ATF.

The weapons dealers started raising red flags because they kept seeing the same straw buyers over the course of months purchasing the same weapons over and over again, which is highly unusual. Standard practice is that the dealers tend to only see straw buyers again at trial, if at all. What’s more, the ATF generally arrests the straw buyer and members of the larger criminal organization at the point of transfer, confiscating the weapons in the process. Not only did this not happen under Operation Fast and Furious, but top brass within the ATF prevented agents on the ground from following standard operating procedures.

All told, by June 2010, suspects surveilled under Operation Fast and Furious had purchased over 1,600 weapons at a total spend of over $1 million. At that time – not at the end of the operation – the ATF were aware of over 300 of these weapons being found at crime scenes, 179 in Mexico and 130 in the United States.