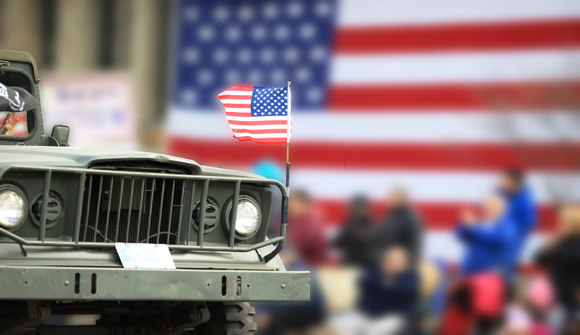 STAFF NEWS & ANALYSIS
Paid-for Patriotism in the NFL
By Philippe Gastonne - May 28, 2015

The Department of Defense and the National Guard are facing growing questions over why they spent millions of dollars on a promotional campaign to salute members of the military at professional football, baseball and basketball games around the country.

"So far everybody's just shocked to learn that this, that these feel-good moments are paid for by the U.S. taxpayer," Sen. Jeff Flake told FoxNews.com on Tuesday…

Across several sports leagues, the segments typically are aired at home games, paying tribute to a member of the military on the Jumbotron. After reports first surfaced of taxpayer money going toward these salutes, a defense official initially claimed Monday that the military pays for recruitment advertising in sports stadiums, but not such "outreach."

Federal contracts show that the U.S. Department of Defense from 2011 to 2014 paid $5.4 million for sponsorship deals with 14 NFL teams. The size of the deals, which cover recruitment and other areas, differ, with more than $1 million going to the Atlanta Falcons and $115,000 going to the New York Jets. – Fox News, May 12, 2015

If patriotism is the last refuge of scoundrels, the National Football League must be something even lower. Those feel-good moments in the pregame are simply nothing more than your tax dollars at work.

On the other hand, we all know the NFL is in business to make money. They would have sold these promotional opportunities to someone else had the Pentagon not bought them. The more interesting question is why the Pentagon thought it was a good idea.

The all-volunteer military worked well in the War on Terror's early years. Still in shock from 9/11, people wanted vengeance and believed their efforts could help achieve it. The Iraq debacle and other failures made that line stop working. Long, multiple overseas deployments to no apparent end have rendered "service" considerably less attractive.

We suspect those parents are the real target. The Pentagon's implicit message: "If you love your country, give us your children."

Show images of clean-shaven young people standing tall, and many parents picture their young ones in uniform. They think the military will make their sons and daughters into model citizens.

Few of these parents served in the military themselves, so they don't know the reality their children will face. They are easy marks for this emotional manipulation. Does it always work? No – but it works well enough.

This leaves us with a question. If the nation really faces serious threats that justify risking these young lives, why the deceptive marketing?

Randolph Bourne had the answer in 1918: "War is the health of the state." Almost a century later, the state is still very healthy.