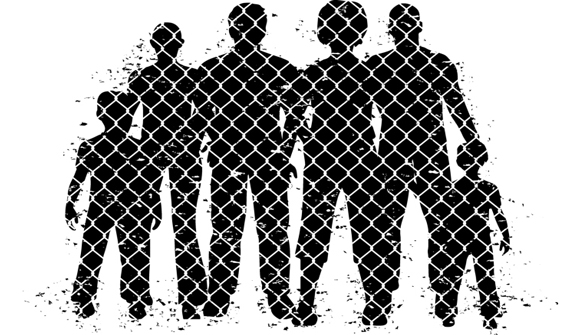 The Link Between Europe's Migrant Crisis and the Climate Change … There's a lot both sides could learn. One of the predominant news stories over the past few months has been the migrant crisis in Europe. Driven by civil wars, refugees from the Middle East and beyond are flowing into the European Union. Over the next 18 months, the UN is expecting more than 1.4 million refugees to arrive in the EU. The swell will have many long-term implications, but governments and citizens are facing a more pressing question: What policies should they adopt toward refugees in the short term? Should they welcome them, reject them, or something in between? How they answer that question has a surprisingly lot to do with how we react to climate change. – Fortune Magazine

Dominant Social Theme: We can learn a lot from the immigration crisis in Europe. There are many teachable moments here, a really wonderful opportunity to study how societies work. Let's take a step back and look. Let's analyze it. Gee, let's get a paper published.

Free-Market Analysis: Millions of people are angry and depressed or just, plain dead. Political systems are convulsed. Europe trembles on the edge of civil war or worse. But in this just-posted article at Fortune Magazine, the immigration crisis is a teachable moment.

The wonkery of this article is truly eye opening. Since "a large chunk of the population embraces a view contrary to the overwhelming verdict of empirical evidence … understanding one will help us better understand the other."

What a coolly intellectual statement that is. Of course, the article was written by a graduate student and then picked up by Fortune editors apparently impressed by it – so perhaps one ought to forgive the distancing tone.

On the other hand, European populations, let alone the migratory streams coursing through the continent, are not lab rats. What is taking place is neither theoretical nor palatable.

But this article is not about emotion. It is instead what we call a "twofer" where a commentator takes two socio-political memes and then uses current events to show that the memes in question are accurate.

In this case, the first meme has to do with positives of immigration. Clinically speaking, immigration is a good thing, we learn. Indeed, the World Bank says so, as the article informs us.

A recent report published by the World Bank, the Organisation for Economic Cooperation and Development (OECD), and the UN's International Labor Organization concludes that "in most countries, migrants pay more in taxes and social contributions than they receive."

Demographic trends show that many countries in the EU are aging too fast to maintain a healthy economy and that an influx of relatively young and skilled workers could alleviate this problem.

The first elite meme has now been presented. Immigration is good for you. Given that this is so, who better to organize immigration than Europe's enlightened leaders? They are … leaders, after all. They know what is right and proper.

Of course, this is technocratic wonkery. We wrote about this just yesterday. You can see the article here. The idea is that the "leadership" merely by virtue of existing knows best. Studies show that countries prosper when immigrants arrive. And thus … the more immigrants the better.

This analysis leaves out the salient fact that there are no countries, only cultures. And the European cultures are extremely strong and tribal and go back thousands of years.

No matter! The immigrants are arriving and it is GOOD that they arrive. In fact, the article is troubled by signs of resistance. "Despite the encouraging evidence, why does widespread opposition against the influx of refugees and their right to asylum persist?" the article asks with charming candor.

And the answer: "Climate change and human psychology"!

You see? A twofer. Climate change is yet another significant meme and the article is determined to accomplish the feat of linking the argument over weather to European immigration chaos.

"Study after study has revealed a link between the amount of carbon dioxide in the atmosphere and the increase in the average global temperature," the article informs us. "Yet many people continue to insist that the climate is not in fact changing. Why?"

The answer, we learn is "human psychology." In particular, "intertemporal choice" – a "trade-off between a smaller gain in the present and a larger gain in the long term." Bottom line: "When the current situation is sufficiently satisfying, it is difficult to motivate people to change."

And yes, that's why we need leaders. To force us to face and make difficult choices.

One person who would surely disagree with this view is paleo-conservative Patrick Buchanan. He recently penned a column entitled, "Can Europe Survive This Invasion?"

Europe is undergoing the greatest mass migration since World War II, when 14 million Germans were driven out of Prussia and eastern Germany and Central and Eastern Europe. That mass migration halted after two years. But no end is in sight to the migrations from Africa and the Middle East.

… Why should they not come? Why should Arabs and Africans not flee the tyranny, terror, poverty and war that are their lot to come to Europe, live the good life, and have life's necessities provided for their families by the munificent welfare states of northern Europe? And what is to stop them?

Patrick Buchanan's argument is very much a cultural one. He is worried about the vitiation of Europe's tribes. Put aside the larger implications of this argument and you are left with a simple question: "Why can't people be left alone?"

Why must Europe's ancient tribes be inundated by Middle Eastern tribes? Why must they be made miserable by a migratory invasion they neither asked for nor intend to cooperate with?

And yet … perhaps it is no accident that the US's serial wars are now driving Middle Easterners and Africans into Europe. Is it "conspiratorial" to suggest that this abrupt migration has been assisted by certain powerful forces?

It is always the same mechanism, what we call directed history. And yet, if so, it remains hidden because it is nearly impossible to conceive of the grand scale on which all this might work.

The idea that entire economies of the world's greatest nations can ascend or descend in order to facilitate a planned global order is certainly beyond most rational comprehension.

Yet in the past decade Western economies have descended drastically and the BRICs have ascended. There has been a general evening out of currencies and economic power. You need such parity in order to pursue a globalist vision – though perhaps, yes, it is merely coincidence.

But if it is not, then it is sensible to vitiate culture. Long ago, we pointed out that Europe's tribes were content to be bribed to participate in the European Union but that when the money ran out, the tribes' reasonableness would recede. And that is exactly what has happened.

The solution, as Brussels may see it, is simple. Reduce tribal homogeneity as fast as possible. In the US there is similar activity, coincidentally or not. "Illegal immigrants" are pouring through southwestern borders just as Middle Eastern tribes are pouring through eastern European ones.

Events are moving fast. It is as if those orchestrating these vast changes – if indeed they are – have decided there is no time to lose.

The threats raised by the mass migration into Europe rise to the level of the existential. Can a civilization survive the replacement of the people who created it by people of other races, religions, and civilizations? In 1981, when Solidarity was crushed by the Warsaw regime on the orders of Moscow, Americans took up the cry — "Let Poland be Poland." One day soon, a voice will arise across the Atlantic calling for an end to this invasion, by force if necessary, and declare: "Let Europe be Europe!"

Yes, perhaps "force" is coming. If so, it may be aimed at YOU. You are presumably the target along with your family's safety, wellbeing and wealth. There are numerous reasons for this and we often explain them in the pages of The Daily Bell. If you wish to enhance your understanding of dominant social themes and their integration and enforcement, please consider subscribing, below.