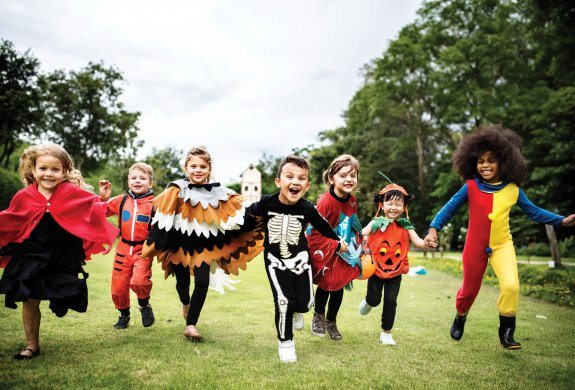 Often, the ADL grimly warns, Halloween “is the opposite of fun” because of the pain it brings to the marginalized communities that the ADL appointed itself the representative of.

For its self-appointed status as the supreme moral authority on the Earth, the organization receives generous multi-million dollar grants to “monitor extremism across the ideological spectrum,” identify and target infidels on behalf of governing authorities, and, of course, to funnel cash to politicians.

Frankly, it’s a miracle these religious authorities haven’t yet banned Halloween festivities altogether on the grounds that they are just too transphobic or anti-Semitic or whatever.

Activities that the ADL wants you, the filthy infidel, to understand that you’re not allowed to engage in on Halloween:

Above: the preferred example included in the ADL’s fatwa depicting acceptably non-offensive, banal Halloween costumes – although the white girl’s costume third from the left looks suspect, like a vaguely offensive Native American feather dress or something

Instead of all the above naughty stuff you’re not allowed to do, the ADL encourages parents and teachers to instead host a race/class/gender equity struggle session for the youth in which they: 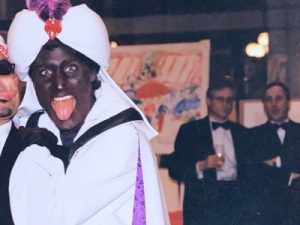 Canadian Prime Minister Justin Trudeau in blackface: It’s terribly wrong, of course. Nonetheless, apparently, if your Daddy was a globalist politician, and you are too, you get a pass. In fact, you get a Planetary Leadership Award from corporate sponsors.

The Essential Problem With the ADL’s Terroristic Demands For Normal People With Healthy Psychologies:

In this way, the bounds of acceptable behavior are set by the craziest, most neurotically sensitive people in the room. Even worse, they are incentivized via the corporate-sponsored Oppression Olympics to squeeze those boundaries forever tighter so that the entire population is forced to tiptoe on eggshells, paranoid about crossing an imaginary line of acceptability that the social engineers are forever enclosing further and further.

The NeoLiberal Church©’s squeezing of those bounds of acceptable behavior is no longer regarded as a psychotic vice, as it has would rightly be in a sane society.

Instead, it’s now regarded as a moral virtue. The extent to which an individual is chronically offended is a measure of his/her/zer’s moral compass. If anyone, anywhere, ever, for any conceivable reason, no matter how absurd or detached from normal human psychology their objection might be, is offended by something, then the offending behavior must he banned/censored– unless, of course, that person is white, Christian, male or heterosexual, in which case their feelings are fair game for mockery.

Anyone who questions the sanity of any given claim of offense is, by definition, a racist, transphobe, Islamophobe, anti-Semite, misogynist ableist, classist, etc. The stigma sticks forever, and there is no recourse to appeal it, nor is there any opportunity for redemption. “Grace” is an alien of a concept in the Neoliberal Church© dogma as “tolerance.” The bigot is simply excommunicated from society, and disappears into oblivion.

So no one sticks out their neck. In effect, there are no social brakes on the SJW crazytrain, no one willing to push back to negotiate the social parameters of acceptable behavior into reasonable bounds as there must be in a functional society.

And we’re all taking the ADL’s crazytrain ride – at least until we decide we’ve had enough and reset the rules of the game as a society to its classical Western roots of Enlightenment principles of free expression.