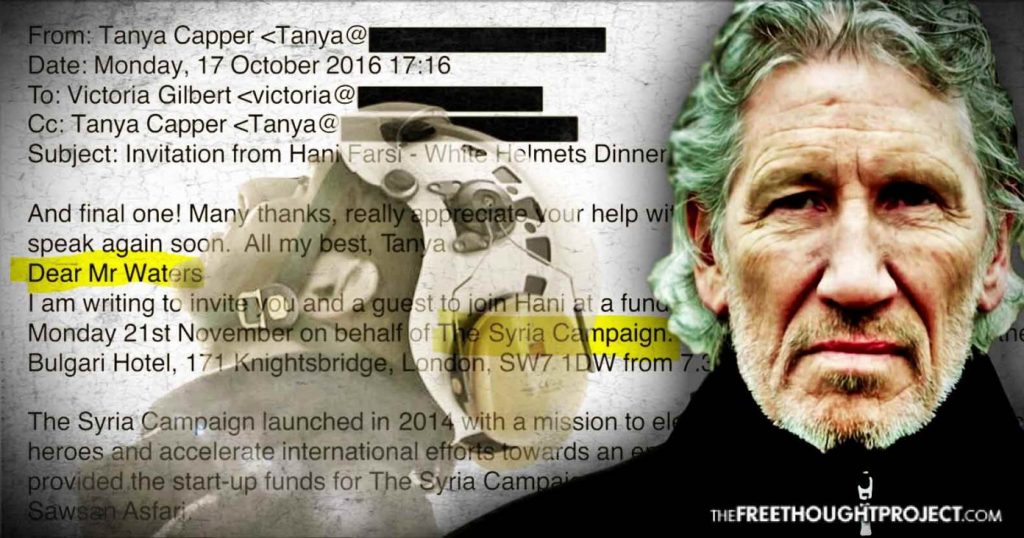 Earlier this week, The Free Thought Project reported that Pink Floyd frontman Roger Waters stopped a concert in Barcelona to warn the crowd about pro-war propaganda that is coming from a group in Syria known as the White Helmets.

In the days since Waters has taken several interviews to further explain his views, the most interesting of which was with a group called the Grayzone Project, where exclusive Emails were featured, showing conversations between Waters’ team and representatives of the White Helmets.

Waters’ first encounter with the White Helmets was actually long before his April 13 concert, back in October 2016 when Saudi-British billionaire Hani Farsi invited him to a lavish fundraiser that he was holding on behalf of the White Helmet affiliated group “The Syria Campaign.”

The Syria Campaign is a subsidiary of the New York-based PR agency, Purpose, which claims to be impartial in the Syrian civil war. But as Alternet reported, they are on a mission to provoke western intervention in the region and have even openly called for a no-fly zone. The Syria Campaign works very closely with the White Helmets and likely has many of the same members.

Last year, the Syria Campaign paid actors up to $600 each to participate in a pro-White Helmet flash mob and orchestral performance at New York City’s Grand Central Station.

Participants in astroturfed White Helmets concert & flashmob were paid up to $600 each by a public relations firm, Ubers were paid for too pic.twitter.com/5KTkIUEv4g 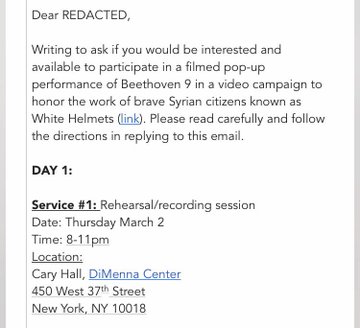 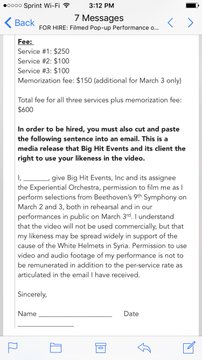 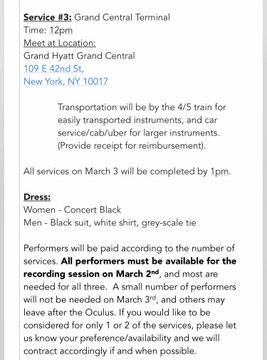 Despite the firm’s best efforts to fill the crowd with people at least pretending to be in favor of their message, anti-war activists still showed up to protest the event, holding up signs that read “Hands off Syria!” “This is U.S. war propaganda,” and “No U.S. bases in Syria.”

The White Helmets were founded in Turkey by a former British MI5 officer named James Le Mesurier. The group has received at least $55 million from the UK government and an additional $23 million from the U.S. government, both of whom have regime change interests in the region. According to data agency Gov Tribe, the U.S. government has given at least $339.6 million in foreign aid to groups attempting to bring about a “transition” in Syria.

The “transition” that the White Helmets and affiliated groups are hoping to bring in Syria is far from peaceful and well-intentioned. Members of the WH have been filmed and photographed standing and celebrating with Al-Qaeda-affiliated terrorists after battles, helping to conduct public executions, and they were even caught carrying around headless bodies.

The Syria Campaign has attempted to cover up these atrocities by dismissing video evidence as “Russian propaganda,” a familiar excuse that has been parroted by government representatives in the U.S. and the UK.

The event that Waters was invited to in 2016 was officially sponsored by one of Farsi’s holding companies, called the Corniche Group.

For the past fifty years, the Farsi family has been active in Europe and the Middle East in urban planning, real estate, property development, the arts, and philanthropy. Led by Hani Farsi, the son of visionary civic leader and philanthropist Mohammed Said Farsi who is credited with shaping modern Saudi Arabia into a global business power player.

The invitation that Waters received said:

I am writing to invite you and a guest to join Hani at a fundraising dinner that he is hosting on Monday 21st November on behalf of The Syria Campaign…The Asfari Foundation provided the start-up funds for The Syria Campaign and we will be joined on the evening by Sawsan Asfari…Their work with The White Helmets has helped these rescue workers attract more than $15 million in government funding and turned them into household names – narrowly missing out on the Nobel Peace Prize this year.

Waters said he did his research and was suspicious of the motives that these interests had, so he never responded and avoided getting involved in those efforts. Instead, Waters did his own research on what was going on in Syria and used his platform to speak out against U.S. intervention.

Unfortunately, a handful of other celebrities did take the bait and signed on to publicly support the White Helmets and the Syria Campaign. These names include George Clooney, Ben Affleck, Daniel Craig, Justin Timberlake, Aziz Ansari and Zoe Saldana.

“I was quite suspicious after I was invited to that [White Helmets] dinner. And now my worst suspicions have been confirmed,” Waters told the Grayzone Project. “I would encourage the celebrities who’ve signed to endorse the White Helmets to stop supporting them because we know what they are. I don’t blame them for having bought into it. On the face of it, it felt plausible that the White Helmets were just good people doing good things. But now we know they’re trying to encourage the West to drops bombs and missiles illegally in Syria.”

Then just last week before his recent concert, Waters was approached yet again through e-mail, this time by a French photojournalist named Pascal Hanrion who described himself as a “militant with the Syrian White Helmets.”

Good afternoon, my name is Pascal Hanrion, I’m photo reporter and climber. I’m a militant with the Syrian White Helmets to denounce crimes against humanity in Syria, especially against children. Last Sunday, I made an important happening in Paris, climbing to the top of center Georges Pompidou museum. I am in Barcelona to do the same, in relation with a very powerful Syrian network. Please, could I meet Roger Water to ask to invite me few seconds on the stage tomorrow during the concert to send a message with him to the children of Syria ‘you are not forgotten!’

As I reported earlier this week, Waters did not give this man his requested time onstage but instead addressed the audience himself with a message of peace and non-intervention.

These Emails give a behind the scenes look at how pro-war PR firms attempt to harness the power of celebrity to promote political ideas that these celebrities often know very little about. These agencies are depending on busy artists or musicians to take them at their word in regards to life-and-death political issues, but luckily at least a few of them seem to be doing their research.

John Vibes is an author and researcher who organizes a number of large events including the Free Your Mind Conference. He also has a publishing company where he offers a censorship free platform for both fiction and non-fiction writers. You can contact him and stay connected to his work at his Facebook page.John just won a 3-year-long battle with cancer, and will be working to help others through his experience, if you wish to contribute to his treatments consider subscribing to his podcast to support. This article first appeared at The Free Thought Project.