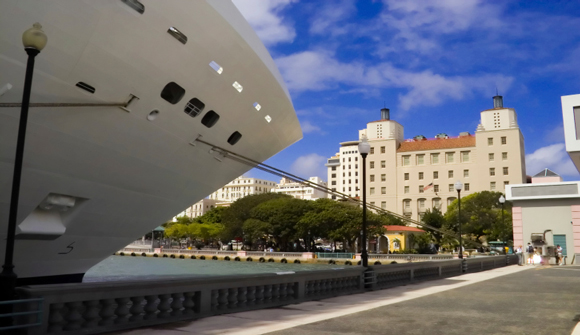 Suppose you own a car dealership in San Juan, the capital of Puerto Rico, and you want to sell new Fords. The only way to get them to the island is by boat – but not just any boat.

In 1920, Congress passed a law restricting all trade between U.S. ports to American-flagged vessels crewed by U.S. citizens. After the First World War, Congress's idea was to protect the country's merchant marine from foreign competition, so that the United States would have plenty of boats and able-bodied sailors at the ready in case the Germans came after the U.S. again in their submarines.

The law, known as the Jones Act, is the naval equivalent of the Second Amendment. If it was ever likely that merchant marine vessels could have stopped an enemy U-boat, it's far less likely that they'll stop an intercontinental ballistic missile. The law has long outlived its original purpose. – Washington Post, June 30, 2015

Don't feel bad if you had to look twice at the source of today's media excerpt. It's not every day the Washington Post reports a law outlived its original purpose.

The Jones Act of 1920 was probably a bad idea in the first place, but it certainly serves no purpose now – unless the purpose is to protect a single, relatively small industry from foreign competition.

That protection comes at a very high price to residents of Puerto Rico, Alaska, Hawaii, Guam and American Samoa. Not only must they rely on commercial ships for most imports and exports, but they have to use the world's most expensive ships and crews.

Oddly, the U.S. Virgin Islands won an exemption from the Jones Act in 1992, a fact the territory's economic development authority proudly touts http://www.usvieda.org/start-business/edc-tax-incentives on its website. How USVI gained this advantage is unclear, but the result is very clear: Cargo rates between the mainland U.S. and Puerto Rico are roughly double the cost of shipping the same items to USVI.

The same occurs in the Pacific. Freight rates from China to Los Angeles are a fraction of the cost for shipping that same container from Los Angeles to Honolulu. Alaska is somewhat less disadvantaged since it has land routes through Canada, but the Jones Act still raises the state's cost of living.

The high living costs in the outlying U.S. serve to discourage economic development, resulting in below-average incomes and elevated social welfare costs. Who bears the price? The entire nation does.

The law doesn't even make sense on its own terms. If we wanted to promote the U.S. auto industry, would we permit only American-made cars on interstate highways? Of course not. No member of Congress would think of proposing such a law. Yet they can't bring themselves to abolish its maritime equivalent. Why?

The answer is that the few who benefit from such laws defend them zealously, while the victims are a diffuse group with many other concerns. No one has adequate incentive to fight against the Jones Act, so it simply lives on.

Maybe what we need is a legislative Jubilee Year. Instead of forgiving all debts, twice each century we repeal every law unless Congress explicitly renews it.

Better yet, do it every year.