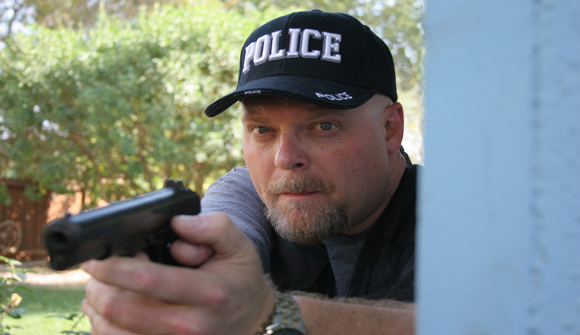 In the last minutes of the video, Harris lies on the pavement with police on top of him. An officer calls for a Taser, but in place of an electric clicking sound, a gunshot rings out.

A voice can be heard saying, "Oh! I shot him! I'm sorry!" Another officer screams out, "He shot him! He shot him!"

Harris, who is bleeding, calls out, too. He's losing his breath, he says. An officer yells back at him.

Clark defended the officer's language, saying the deputy experienced auditory exclusion, never heard the gunshot and thought the suspect was out of breath from running. The language has no bearing on whether the shooting was justified, Clark said. – CNN.com, April 12, 2015

In our last commentary on police shootings (see Police Deserve No Sympathy Until the Blue Line Breaks), we said police officers are not different from ordinary citizens. This may not be true in Tulsa.

At least one deputy sheriff there cannot hear gunshots fired directly over his shoulder. That is certainly different.

Forget for a moment the senior citizen reserve deputy who fired the shot in this case, apparently unable to tell the difference between a taser and a gun in his hand. Let's look at what the other officer said, the one who received the sudden "auditory exclusion" diagnosis.

This was a fully trained and certified officer, not a badge-renting insurance executive, and he was being brutally and refreshingly honest at that moment. In his mind, the fact that Mr. Harris did not immediately surrender to the police and instead ran away meant, "Anything goes."

Police officers around the nation have created a new, de facto capital offense. Resisting arrest or fleeing from the police carries a sentence of death without a trial.

It's nothing new, of course. Ask any kid living in a ghetto or a black man, especially in the South. But with the growth of "citizen journalists" documenting police actions more frequently and the power of the Internet Reformation in making information more widely available, what was previously hidden – or ignored by choice – has become undeniably, unavoidably obvious.

We heard it repeatedly in response to the Walter Scott shooting in North Carolina. Police officers and their badge-worshiping sycophants said it with faux regret: "He just shouldn't have run."

If the criminal justice system contained any real justice, it would weed out officers with this attitude. It obviously does not. That is a problem.

Does the fact that people sometimes flee make the police officer's job harder? Yes. Does this give officers the right to shoot, beat, or otherwise brutalize anyone who flees? Certainly not, yet this is the way they behave in way too many cases.

Don't forget that last comment: "F**k your breath." Listen to it on the tape and you will hear the contempt dripping in his voice. This went far beyond unprofessional. It was hatred, pure evil, the kind of bloodlust that in an earlier age might have been called a war crime.

Yet, so far as we know, this officer will face no discipline at all. His department blames "auditory exclusion."

Here we have one of Tulsa's finest who allegedly did not know the man he was restraining had just been shot.

If that is what happened, he needs to be taken off the streets for his own protection as well as public safety. He can't protect anyone, even himself, if he can't hear gunshots a few inches away.

No such thing will happen, of course. This is not about protecting the public. Tulsa is more interested in protecting its police from the public. In this, they are disturbingly typical.