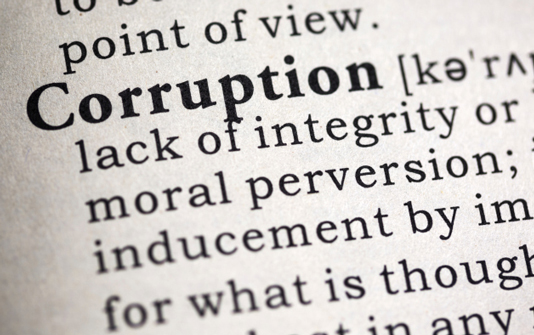 “All governments suffer a recurring problem: Power attracts pathological personalities. It is not that power corrupts but that it is magnetic to the corruptible.”― Frank Herbert

It doesn’t matter whether you’re talking about a politician, an entertainment mogul, a corporate CEO or a police officer: give any one person (or government agency) too much power and allow him or her or it to believe that they are entitled, untouchable and will not be held accountable for their actions, and those powers will eventually be abused.

We’re seeing this dynamic play out every day in communities across America.

Abuse of power—and the ambition-fueled hypocrisy and deliberate disregard for misconduct that make those abuses possible—works the same whether you’re talking about sexual harassment, government corruption, or the rule of law.

For instance, 20 years ago, I took up a sexual harassment lawsuit on behalf of a young woman—a state employee—who claimed that her boss, a politically powerful man, had arranged for her to meet him in a hotel room, where he then allegedly dropped his pants, propositioned her and invited her to perform oral sex on him.

Despite the fact that this man had a well-known reputation for womanizing and this woman was merely one in a long line of women who had accused the man of groping, propositioning, and pressuring them for sexual favors in the workplace, she was denounced as white trash and subjected to a massive smear campaign by the man’s wife, friends and colleagues (including the leading women’s rights organizations of the day), while he was given lucrative book deals and paid lavish sums for speaking engagements.

Here we are 20 years later and not much has changed.

We’re still shocked by sexual harassment in the workplace, the victims of these sexual predators are still being harassed and smeared, and those who stand to gain the most by overlooking wrongdoing (all across the political spectrum) are still turning a blind eye to misconduct when it’s politically expedient to do so.

This time, it’s Hollywood producer Harvey Weinstein—longtime Clinton associate and a powerhouse when it comes to raising money for Democrats—who is being accused of decades of sexual assaults, aggressively sexual overtures and harassment.

I won’t go into the nauseating details here. You can read them for yourself at the New York Times and the New Yorker.

Suffice it to say that it’s the same old story all over again: man rises to power, man abuses power abominably, man intimidates and threatens anyone who challenges him with retaliation or worse, and man gets away with it because of a culture of compliance in which no one speaks up because they don’t want to lose their job or their money or their place among the elite.

From what I’ve read, this was Hollywood’s worst-kept secret.

In other words, everyone who was anyone knew about it. They were either complicit in allowing the abuses to take place, turning a blind eye to them, or helping to cover them up.

It’s not just happening in Hollywood, however.

And it’s not just sexual predators that we have to worry about.

For every Harvey Weinstein (or Roger Ailes or Bill Cosby or Donald Trump) who eventually gets called out for his sexual misbehavior, there are hundreds—thousands—of others in the American police state who are getting away with murder—in many cases, literally—simply because they can.

The cop who shoots the unarmed citizen first and asks questions later might get put on paid leave for a while or take a job with another police department, but that’s just a slap on the wrist. The shootings and SWAT team raids and excessive use of force will continue, because the police unions and the politicians and the courts won’t do a thing to stop it. Case in point: The Justice Department will no longer attempt to police the police when it comes to official misconduct. Instead, it plans to give police agencies more money and authority to “fight” crime.

The war hawks who are making a profit by waging endless wars abroad, killing innocent civilians in hospitals and schools, and turning the American homeland into a domestic battlefield will continue to do so because neither the president nor the politicians will dare to challenge the military industrial complex. Case in point: Rather than scaling back on America’s endless wars, President Trump—like his predecessors—has continued to expand America’s military empire and its attempts to police the globe.

The National Security Agency that carries out warrantless surveillance on Americans’ internet and phone communications will continue to do so, because the government doesn’t want to relinquish any of its ill-gotten powers. Case in point: The USA Liberty Act, proposed as a way to “fix” all that’s wrong with domestic surveillance, will instead legitimize the government’s snooping powers.

Unless something changes in the way we deal with these ongoing, egregious abuses of power, the predators of the police state will continue to wreak havoc on our freedoms, our communities, and our lives.

Police officers will continue to shoot and kill unarmed citizens. Government agents—including local police—will continue to dress and act like soldiers on a battlefield.

And powerful men (and women) will continue to abuse the powers of their office by treating those around them as underlings and second-class citizens who are unworthy of dignity and respect and undeserving of the legal rights and protections that should be afforded to all Americans.

As Dacher Keltner, professor of psychology at the at the University of California, Berkeley, observed in the Harvard Business Review, “While people usually gain power through traits and actions that advance the interests of others, such as empathy, collaboration, openness, fairness, and sharing; when they start to feel powerful or enjoy a position of privilege, those qualities begin to fade. The powerful are more likely than other people to engage in rude, selfish, and unethical behavior.”

After conducting a series of experiments into the phenomenon of how power corrupts, Keltner concluded: “Just the random assignment of power, and all kinds of mischief ensues, and people will become impulsive. They eat more resources than is their fair share. They take more money. People become more unethical. They think unethical behavior is okay if they engage in it. People are more likely to stereotype. They’re more likely to stop attending to other people carefully.”

However, it takes a culture of entitlement and a nation of compliant, willfully ignorant, politically divided citizens to provide the foundations of tyranny.

As researchers Joris Lammers and Adam Galinsky found, those in power not only tend to abuse that power but they also feel entitled to abuse it: “People with power that they think is justified break rules not only because they can get away with it, but also because they feel at some intuitive level that they are entitled to take what they want.”

That sense of entitlement and immunity from charges of wrongdoing dovetails with Richard Nixon’s belief that “when the President does it, that means that it is not illegal.”

For too long now, America has played politics with its principles and allowed the president and his colleagues to act in violation of the rule of law.

“We the people” are paying the price for it now.

Americans have allowed Congress, the White House and the Judiciary to wreak havoc with our freedoms. They have tolerated an oligarchy in which a powerful, elite group of wealthy donors is calling the shots. They have paid homage to patriotism while allowing the military industrial complex to spread death and destruction abroad. And they have turned a blind eye to all manner of wrongdoing when it was politically expedient.

This culture of compliance must stop.

The empowerment of petty tyrants and political gods must end.

For starters, let’s go back to the basics: the Declaration of Independence, the U.S. Constitution and the Bill of Rights.

Let’s recommit to abiding by the rule of law.

Here’s what the rule of law means in a nutshell: it means that everyone is treated the same under the law, everyone is held equally accountable to abiding by the law, and no one is given a free pass based on their politics, their connections, their wealth, their status or any other bright line test used to confer special treatment on the elite.

Let’s demand scrutiny and transparency at all levels of government, which in turn will lead to accountability.

We need to stop being victimized by these predators.

As I point out in my book Battlefield America: The War on the American People, I’m not just talking about the political predators in office, but the ones who are running the show behind the scenes—the shadow government—comprised of unelected government bureaucrats whose powers are unaffected by elections, unaltered by populist movements, and beyond the reach of the law.

There is no way to erase the scars left by the government’s greed for money and power, its disregard for human life, its corruption and graft, its pollution of the environment, its reliance on excessive force in order to ensure compliance, its covert activities, its illegal surveillance, and its blatant disdain for the rule of law.

“We the people”—men and women alike— have been victims of the police state for so long that not many Americans even remember what it is to be truly free anymore. Worse, few want to shoulder the responsibility that goes along with maintaining freedom.

Still, we must try.

Reprinted with permission from Rutherford.org