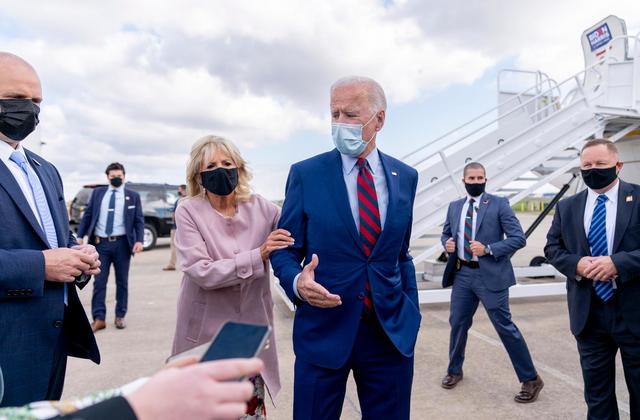 STAFF NEWS & ANALYSIS
Prediction: The Deep State Will Toss Joseph Biden Out Like an Old Casserole Within a Year
By Ben Bartee - September 21, 2021

The Ides of March are upon us in September, and the air is heavy with palace intrigue.

When White House officials leak damaging goodies to their allies at Politico, it’s a sure sign the sinking ship is barely treading water. The rats appear to be jumping; Biden’s presidency will likely not survive another year.

“Anxiety about what President Joe Biden might say if he takes questions from the media drives some in the White House to mute him or turn off his public appearances altogether, Politico reported Tuesday, citing White House officials…

Biden has made frequent flubs during press events and other public appearances by losing his line of thinking, stumbling, and forgetting names…

Biden occasionally shrugs off reporters’ inquiries by telling the press that his staff directed him not to take questions, suggesting officials seek to minimize the number of those incidents.”

This is all an outrageous, illegitimate affront to the façade of American democracy. No voter elected the anonymous staffers/bureaucrats who control when the president can speak and what he can speak about. In a functional representative democracy, shadowy figures in the background don’t get to control such issues; the people, theoretically, elect their representatives to personally work on their behalf. 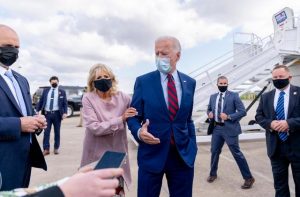 Biden’s handers: ‘Let’s get you home away from these cameras, sweetie muffin’

Outrageous, for sure — but also understandable from a political perspective for the cynical DNC goons currently in control. Every time he opens his mouth, whatever comes out is sure to embarrass his handlers:

The absurdity emanating from the White House, of course, is not new. Earlier this year, Her Anointed Grace First Lady Jill Biden bizarrely claimed authority over the G7 Summit in Great Britain, despite never having won an election in her lifetime: 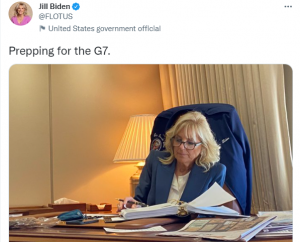 The corporate media, predictably, fawned over Jill Biden’s courageous usurpation of power for herself, parroting her self-proclamation as a “partner” in the G7 meeting – despite, again, never having been elected to any government post in her entire life (she’s a career academic).

All things considered, Biden’s handlers are desperate to shove anyone else into the spotlight besides Joseph himself:

“President Joe Biden is having a very bad month. His poll numbers have slipped to their lowest point of his presidency, and much of it has to do with Covid and Afghanistan… The president began the month with an average job approval rating of 51.5%, down from 54% at the start of May. By Tuesday, Biden’s average approval rating had fallen to 47%, the lowest so far in his presidency… In Washington, Biden’s plummeting approval ratings are causing headaches for his fellow Democrats.”

Speculation About the Biden PR Management Strategy:  What Does This All Mean?

So tonight, I’m announcing that the Department of Labor is developing an emergency rule to require all employers with 100 or more employees that together employ over 80 million workers to ensure their work forces are fully vaccinated…

My message to unvaccinated Americans is this: What more is there to wait for?… We’ve been patient, but our patience is wearing thin. And your refusal has cost all of us.”

The speculation: such aggressive declarations could be intended to draw fire toward Biden so that when he is inevitably replaced, his successor (Kamala Harris) will enjoy a softer landing — a variation on the old good cop/bad cop routine.

When he’s dead and gone – or else, just retired back to his Delaware compound to play MarioKart or whatever — the sad, limp legacy of Joseph Biden will be:

In the darkness of night before he goes to sleep, the vicious, racist, warmongering, cowardly trail he leaves behind would trouble a decent man. But, being the soulless politician that he has always been and will die as, it likely won’t – assuming he can remember, by this point, all the transgressions against decency that he’s committed throughout his 4+ decade DC career.

Kamala Harris Is Bringing the Axe

None of these developments, to be clear, warrant celebration from normal Americans with a hope for a better tomorrow; Joseph Biden’s replacement, Kamala Harris, exhibits all of the filthy, scheming politician-y behavior that characterized Joe Biden in spades — and more.

There’s not an innocent American Harris won’t cart off to prison to serve her own cynical political ends, nor a warmongering speech she won’t give to please her Israeli super-donors. The business of DC will continue unabated, irrespective of which corporate-state puppet takes the stage. 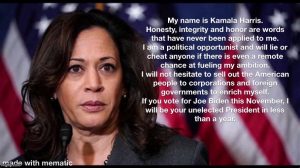