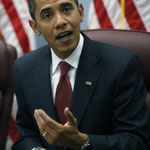 The long-held assumption that US assets – particularly government bonds – are a safe haven will soon be overturned as investors lose their patience with the world's biggest economy, according to Willem Buiter. Professor Buiter, a former Monetary Policy Committee member who is now at the London School of Economics, said this increasing disenchantment would result in an exodus of foreign cash from the US. The warning comes despite the dollar having strengthened significantly against other major currencies, including the sterling and the euro, and after hitting historic lows last year. It will reignite fears about the currency's prospects, as well as sparking fears about the sustainability of President-Elect Barack Obama's mooted plans for a Keynesian-style increase in public spending to pull the US out of recession. Writing on his blog, Prof Buiter said: "There will, before long (my best guess is between two and five years from now) be a global dumping of US dollar assets, including US government assets. Old habits die hard. The US dollar and US Treasury bills and bonds are still viewed as a safe haven by many. But learning takes place." – Telegraph

Free-Market Analysis: Being supporters of a free-market oriented publication with a strong belief in the saving graces of gold and silver, we keep waiting for ringing endorsements of precious metals in the mainstream media. This article would have provided a good opportunity – but it doesn't. Nor do others. Yet we remain optimistic. Why so? Because we have decided (we really have) that it is statistically impossible for so many millions and billions of words to be written by so many highly paid economic thinkers without an occasional positive affirmation of honest money. Now lest you think we have lost our somewhat scattered collective mind, please understand we always try to ground our commentary in academic perspectives – and in this case we are drawing on The Infinite Monkey Theorem for our conclusions (also known, delightfully, as dactylography). What's that? See here …

The infinite monkey theorem states that a monkey hitting keys at random on a typewriter keyboard for an infinite amount of time will almost surely type a given text, such as the complete works of William Shakespeare. … Variants of the theorem include multiple and even infinitely many typists, and the target text varies between an entire library and a single sentence. The history of these statements can be traced back to Aristotle's On Generation and Corruption and Cicero's De natura deorum, through Blaise Pascal and Jonathan Swift, and finally to modern statements with their iconic typewriters. … Today, popular interest in the typing monkeys is sustained by numerous appearances in literature, television, radio, music, and the Internet. In 2003, an experiment was performed with six Celebes Crested Macaques, but their literary contribution was five pages consisting largely of the letter 'S'. (Wikipedia)

All right, maybe the Infinite Monkey Theorem has its problems, but we still find it astonishing that the best mainstream writers are willing to be hard-headed about every aspect of the financial crisis without mentioning gold or silver. Yes, they pour on the gloom and doom without even hinting that gold and silver are honest-to-goodness safe havens – really, they are – and have been throughout history. Below, for instance, is an excerpt from a recent John Crudele column at the New York Post entitled "Why You Should Keep a Wary Eye on Treasuries."

Even if stocks continue to go lower in 2009, they aren't likely to be the focus of angst. That honor will probably go to bonds – and if I'm right, and we are very unlucky, the markets will suffer some pretty sizeable tremors. The reason is simple: even before the untested administration of Barack Obama takes over, Washington has been trying some dangerous financial alchemy. Not only has the government bailed out just about any company or industry that came knocking, but it is now floating the idea of $300 billion in tax cuts. That's a big number, even if Washington wasn't already running a projected deficit of $1 trillion for the year. To pay for all the bailouts and stimuli the US government is – without any sense of shame – essentially proposing to run the nation's printing presses full-out. But the idea that printing more money is the way out of our jam could unsettle, shock and then repulse foreign investors, who buy huge amounts of the debt that allows our deficit-ridden government to function. The Federal Reserve's balance sheet is already ballooning and will get even fatter if Bernanke goes through with his plan – threat? – to purchase mortgages in a bold, and perhaps crazy, effort to help the nation's depressed housing market. But most bond pessimists are concerned that the government's decision to pump huge amounts of money into the economy will create hyper-inflation. I'm worried about something worse: that the Fed's experiment, or, rather, experiments – plural – will cause investors worldwide to be hesitant to invest in the US. If that happens the dollar will decline in value and interest rates will shoot up. (NY Post)

Good stuff, John. Yet couldn't you have mentioned a potential solution? Trust us, it's not there. And Crudele is a really good, hardened, mainstream financial guy. We don't mean to pick on him, but what is a poor mainstream reader to do? Both the article excerpt that began this issue of the Bell, and the following Crudele excerpt are really good serial summaries of what is going on – and the grimness of what could/will happen – absent a relevant hard-money solution. In fact, one only looks at the difficulties that the US has – its wars, national deficits, lack of industrial production and a tapped-out savings rate – to understand that sooner or later the dollar will fall from its crazy heights and the US bond market with it. Where will the money go then? To Europe or China or Japan? No, after paper, perhaps, comes something else.

We don't know when it will happen, but surely there will be another step up in the price of gold and silver – especially silver given that the ratio is so out of wack. We would be kinda surprised if something like this didn't happen in 2009. Of course, something could intervene (government confiscation) but sooner or later people are probably going to come to the conclusion that all sorts of paper money bets, from dollars, to stocks to bonds are somewhat risky plays. (Are you still looking for a V shaped recovery?). Sure, stock markets especially could go up if some US$5 trillion worth of stimulation pours into the US economy, and more into Europe. But the volatility will likely be intense and if precious metals start to make a move, the trend – one that began around 2000 – will start to seem a lot clearer. Even to a typing monkey!